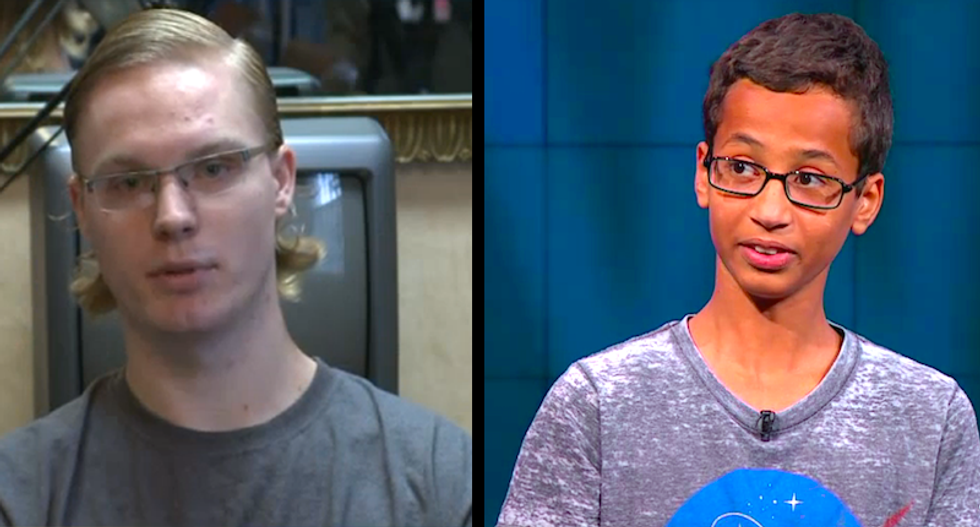 The Federal Aviation Administration (FAA) requires all persons flying a small unmanned aircraft register their craft before flying it. But now one student is challenging that requirement after the FAA came after him for two drones he created — one that shoots a gun as it flies and one that has a flamethrower attached to it.

Austin Haughwout, and his father, Bret Haughwout, posted videos of the drones in action in July and December of last year, Ars Technica reported.

The first shows a drone with a handgun that appears to fire into the woods surrounding the Haughwout's home. Just four months later the FAA sent the family an administrative subpoena requesting records, including purchase records and an accounting of advertising dollars gained from the YouTube video of the "Flying Gun."

The father declined to send the FAA the requested materials. He wrote in an email that because the FAA had not accused the two of a crime he was under no obligation to comply with their request for documents. The FAA still hasn't alleged a crime was committed, rather they are seeking information about the drone-related activities.

Weeks later, the two posted their video of the flamethrower drone firing on a turkey that earned over 4 million views and a lot of international attention and press coverage.

The FAA sent another subpoena, and again, the Haughwouts refused to respond with the requested materials. The FAA took them to court in February to seek federal assistance in enforcing the subpoena. U.S. District Judge Jeffrey A. Meyer needed more information before he could rule.

Assistant United States Attorney John Larson wrote that the videos depict an "aircraft" to be regulated by the FAA because, "even though it is unmanned, it is a contrivance/device that is invented, used, or designed to fly in the air."

The Haughwout's attorney, Mario Cerame, made the argument that laws governing aircraft were written long before drones even existed. "At the time the FAA organic statute was created, drones were the stuff of science fiction," he wrote in his opening brief. "The statute did not contemplate their existence. Rather, the statute was directed at airplanes, helicopters, and blimps, and the resources on the ground to support them."

Unlike airplanes and helicopters, Cerame said that many things fly in the air without the need for federal regulation. "Flags also fly, when attached to a pole, don’t they?" he asked rhetorically. "We also say that plastic bags or bits of paper carried on the air fly about — isn’t that a motif in American Beauty? ... Baseballs can go pretty high — we call it a 'fly ball.'"

If "airborne locomotion" is the requirement, he says there are also "Frisbees, clay pigeons, paper airplanes... a rubber band, spitballs, anything juggled, a birthday balloon, hand tossed pizza dough," and more that could fall under those definitions. Though it's difficult to make the argument that a spitball is similar to a flamethrower drone, both in design and purpose.

While the FAA won a suit in 2014 regulating model airplanes, case law moves slowly when dealing with new technologies.

"There is a clear argument to be made that drones are so new and technologically different from traditional manned aircraft that they should be regulated differently," attorney Lisa Ellman explained. "But, right now that's not the case and legally [unmanned aerial systems] have been deemed to fall under the definition of ‘aircraft.’ The NTSB ruled that way in the Pirker case. So I would be surprised if the respondent prevails on this point."

Last year, 14-year-old Ahmed Mohamed was handcuffed, arrested and held after bringing a homemade clock to school that a teacher said looked like a "hoax bomb." Despite insisting the clock was a clock, police took him into custody for making a threat. Thus far, Austin Haughwout has not been arrested for making an actual flamethrower drone.

You can witness the flamethrower drone in action in the video below: