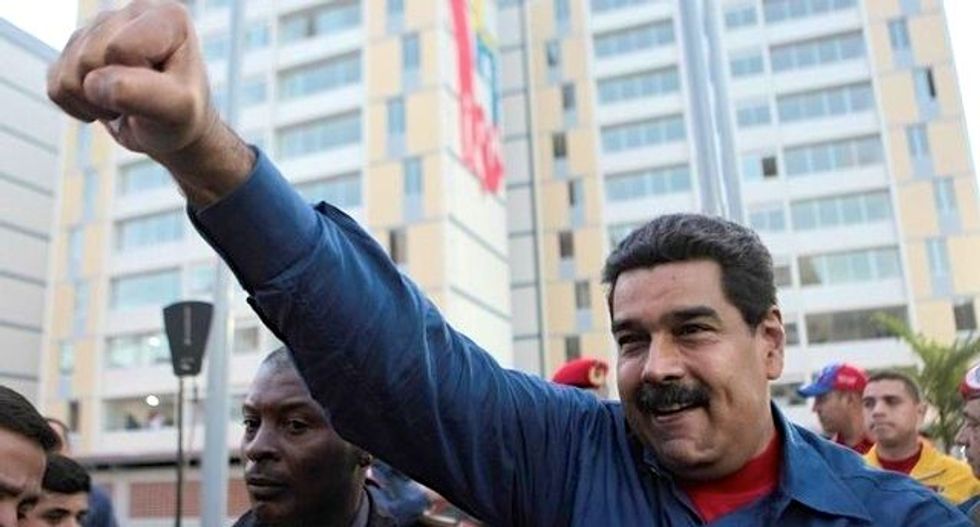 Venezuela's President Nicolas Maduro (C) greets supporters as he arrives to an event for handing over houses in Caracas, Venezuela June 9, 2016. Miraflores Palace/Handout via REUTERS

U.S. Secretary of State John Kerry called on Tuesday for a referendum that could force Venezuelan President Nicolas Maduro from office amid the OPEC nation's deepening economic and political crisis.

Venezuela is suffering a protracted and brutal economic slowdown, long lines for food and medicines and soaring prices, leading to protests and opposition calls for a recall referendum to remove Maduro, a measure allowed under the constitution.

In his opening speech to a meeting of the Organization of American States (OAS) in the Dominican Republic, Kerry called for dialogue and said Washington was strongly committed to working with members to address Venezuela's "deeply troubling" situation.

In a reference to the referendum push, Kerry called on the political heirs of Venezuela's former President Hugo Chavez to respect people's right to constitutional mechanisms to express their will, throwing Washington's weight behind OAS chief Luis Almagro's unvarnished criticism of Maduro.

"The United States joins with Secretary General Almagro and others in the international community in calling on the Venezuelan government to release political prisoners, respect freedom of expression and assembly, alleviate shortages of food and medicine, and honor its own constitutional mechanisms, including a fair and timely recall referendum,” Kerry said.

Venezuela’s opposition accuses the elections council of stalling the recall process at the behest of Maduro by arbitrarily changing criteria for requesting a recall vote. Maduro has said any recall against him would be in 2017 at the earliest, pushing back against opposition pressure.

Several opposition politicians are in jail, notably hardline leader Leopoldo Lopez, who has a 14-year sentence for inciting 2014 anti-government protests that spiraled into violence killing more than 40 people. The government denies it holds political prisoners.

Almagro has called Maduro, who won an election to succeed Chavez in 2013, a "petty dictator."

In a fiery speech to the OAS members directly after Kerry's remarks, Venezuelan Foreign Minister Delcy Rodriguez accused Almagro of bias and siding with Venezuelan opposition groups in pushing for a referendum to recall Maduro.

“I see now this is ordered by Washington. I know they are on Washington’s payroll to meddle in the domestic affairs of Venezuela,” she said, speaking through a translator.

The tough words may set the tone for a rare meeting between Rodriguez and Kerry later on Tuesday on the sidelines of the assembly.

In May, Almagro called for an emergency meeting, to be held later this month, to initiate a process that could end in Venezuela's suspension from the regional body.

Almagro, a former Uruguayan foreign minister, has backed the opposition calls for a referendum against Maduro, who he accused of disrupting democracy by blocking the opposition-controlled national assembly and putting loyalists in the Supreme Court.

Rodriguez said Venezuelans should decide the future path of their country.

"We are not here to judge the countries and societies of other countries," Rodriguez told the 34-member bloc.

"Today, Venezuela is the victim of international bullying from the right ... we do not need anyone's charity. Venezuela is a dignified country."

She said Almagro’s behavior was unacceptable. “It is simply unacceptable what he has done to our country.”

Maduro accuses foes of deliberately stirring up trouble and seeking a coup.

Venezuela's government and opposition held separate meetings with mediators in the Dominican Republic in recent weeks to explore possibilities of dialogue but little progress was made.