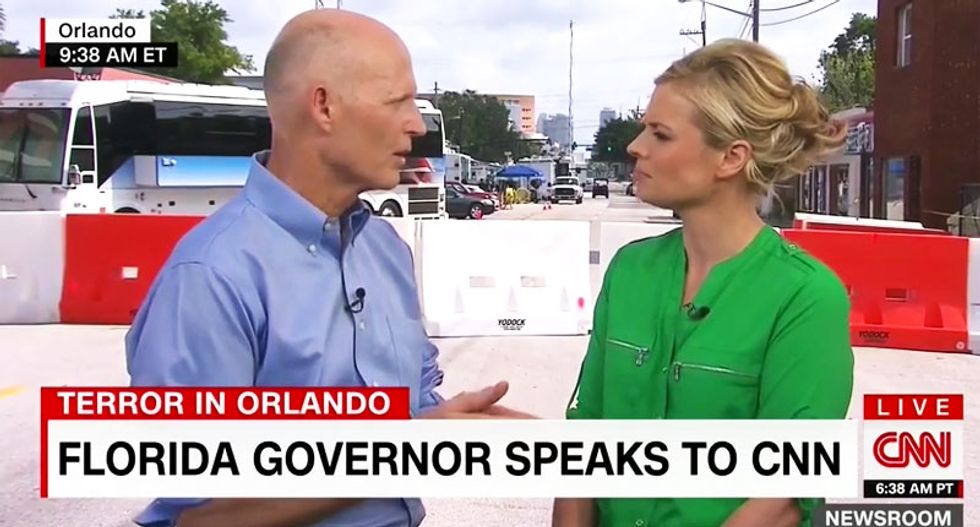 Speaking with CNN Friday morning, Florida Gov. Rick Scott repeatedly swatted away questions over the easy availability of guns in his state instead saying the gun control question should be put off until after the government deals with the threat of ISIS.

Florida officials have been under fire for avoiding the issues of both guns and attacks on the LGBT community in the wake of the Orlando mass shooting that claimed 49 lives.

"President Obama has been very outspoken against gun control opponents and he said he dares them to meet with the victims and see if that doesn't change their views on gun control," Scott was asked CNN host Pamela Brown. "Has it changed your views at all, meeting with the victims, and the fact that in the state of Florida it's easier to walk out with an AR-15 than a handgun?"

"Well, nobody would think that anybody on a terrorist watch list should have a gun, right?" Scott replied. "We all can agree that we shouldn't, we don't want someone like that to be walking around with any weapons. The 2nd Amendment didn't kill anybody. This is ISIS. This is evil. This is radical Islam. I'm tired of what's going on in the country -- that we're not focusing enough on ISIS."

Pressed that, "Yes, ISIS terrorism can be to blame,"Brown asked Scott, "Can you accept any responsibility for the gun laws here in Florida. The fact that it is easier to walk out of a gun store in a half an hour with an AR-15 that can kill more people faster than a pistol, yet it is harder to get a pistol than an AR-15."

Scott dismissed the question again, falling back on discussing ISIS instead of what he can do as a lawmaker in his own state.

Asked once more if he would look at changing Florida's gun laws, Scott repeated, "Let's have a conversation about ISIS."