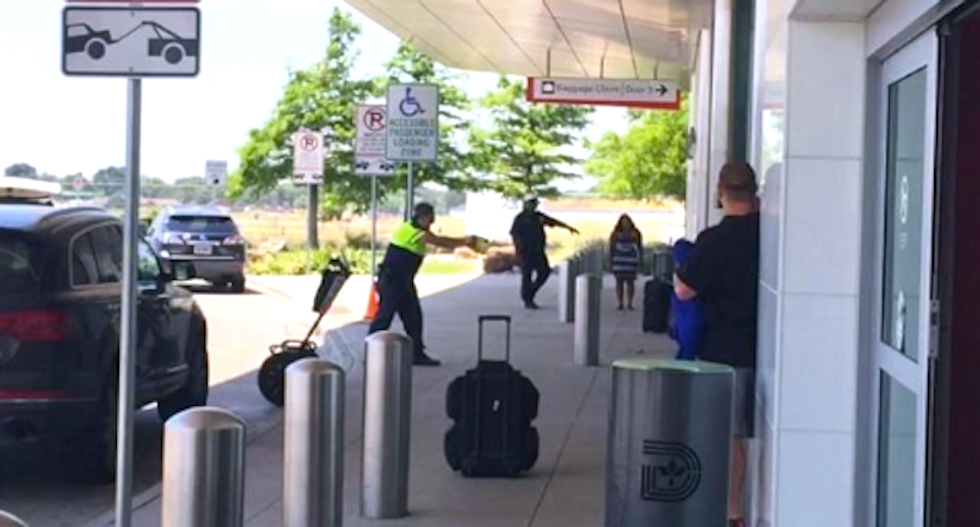 Police shot a man who charged at them yelling "shoot me" at Love Field airport in Dallas on Friday, and the man was taken to an area hospital, witnesses told local TV broadcaster WFAA.

The shooting near baggage claim at the airport a few miles form central Dallas prompted an evacuation and temporary lockdown.

Five shots could be heard on a video played on the Fox 4 Dallas TV station, followed by a volley of several more. Shouts of "get down" were heard and an officer with a pistol could be seen.

Multiple witnesses told WFAA the man told officer "shoot me, I dare you."

The man was taken away in an ambulance and his condition was not immediately known. A Dallas police union said in a tweet the man was in "OK condition."

Media reports said car traffic had been halted to the airport, which is a major center for Southwest Airlines, a few miles from central Dallas.

"We are currently gathering additional details regarding the situation at Dallas Love Field," Southwest said in a statement. "Our Southwest hearts are with all those affected by this event."

Police said they would soon release details of the incident.

Bryan Armstrong, a witness, told CNN the man who was shot had a rock in his hand and police ordered him to drop it as he walked toward them. Police shot the man when he did not comply, Armstrong said.

I just got off the plane at Dallas Lovefield airport and this what I come out to 😳. You can use this footage with video credit to Bryan Armstrong/ @flashyfilms_ #DallasLoveFieldShooting