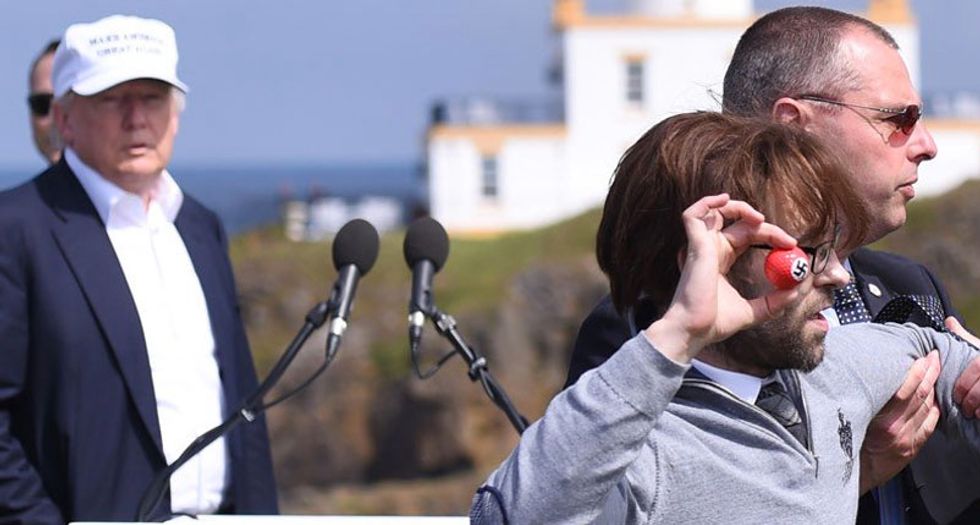 An English comedian, known for high profile pranks, was hauled away by security Friday morning after throwing handfuls of swastika-emblazoned golf balls at presumptive GOP presidential nominee Donald Trump during remarks at the reopening of his Scottish golf course.

While speaking from the ninth hole at Turnberry Trump,  comedian Lee Nelson tossed several of the bright red swastika-stamped  balls at Trump, causing the candidate to yell "Get him out of here!" reports the Daily Mail.

Last year Nelson was taken away after tossing handfuls of fake money at former FIFA president Sepp Blatter during a press conference.

As Nelson was being removed, the comedian -- wearing a Trump Turnberry sweater -- held up one of the  balls and announced to the cameras that they were "available in the clubhouse as part of a new Trump Turnberry range."

Nelson then turned to the disgruntled candidate  and told him, "Sorry Mr Trump. I forgot to hand them out."

During his remarks, Trump told the assembled media that the dropping value of the pound -- as the result of Brexit -- would make playing golf at Turnberry cheaper for tourists.

"Get him out" comedian Lee Nelson thrown out of Trump press conference after tossing golf balls with Nazi swastikas pic.twitter.com/s89v5F9anf