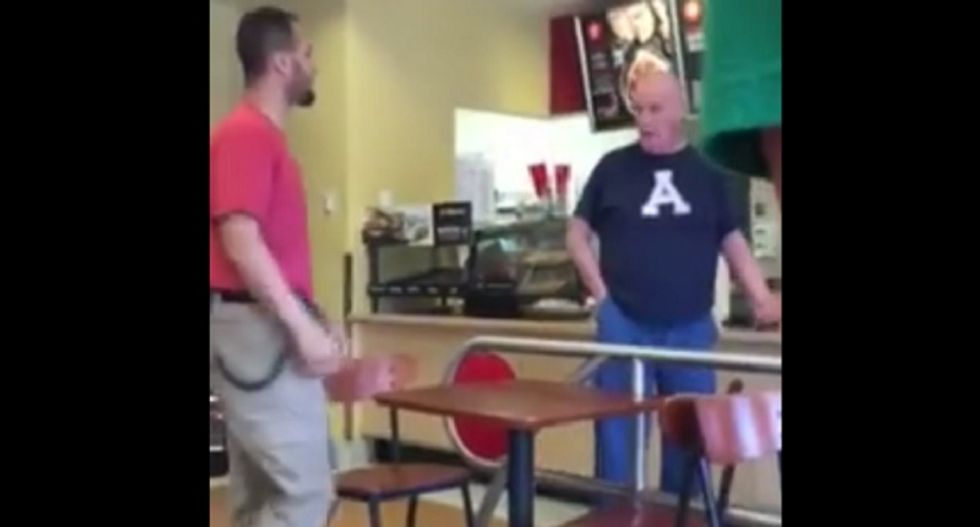 Jessie Maher paused her shopping trip to Target on Monday to breastfeed her infant. But she wasn't expecting the mundane activity to spark a confrontation with an outraged older man.

According to Fox61, she was in Target in Torrington, Connecticut, at about 11:30 a.m. on Monday when the incident occurred. She was able to film the whole thing, and posted it to social media.

A man can be seen standing at a food counter and yelling people who are defending Maher, who at one point begins crying.

At one point, a woman walks up to Maher and stands protectively in front of her, telling the man that if he is offended by her baby feeding, then look away.

"You're fine," the woman says. "He has no right to be doing what he's doing. You have a baby in your hands."

Target employees then surround the man and direct him out of the store.

"Look at all these wonderful people coming to my defense," Maher says tearfully, apparently moved by the response around her.

"I'm good, I'm feeding my baby, we're chill. And I have some defending women around me, thank you so much," Maher can be heard saying at the end of the encounter.

Artificial Intelligence is redefining the proverb "seeing is believing," with a deluge of images created out of thin air and people shown mouthing things they never said in real-looking deepfakes that have eroded online trust.