Women slam rape victim blaming with video about fake male murder victim: 'What was he wearing though?' 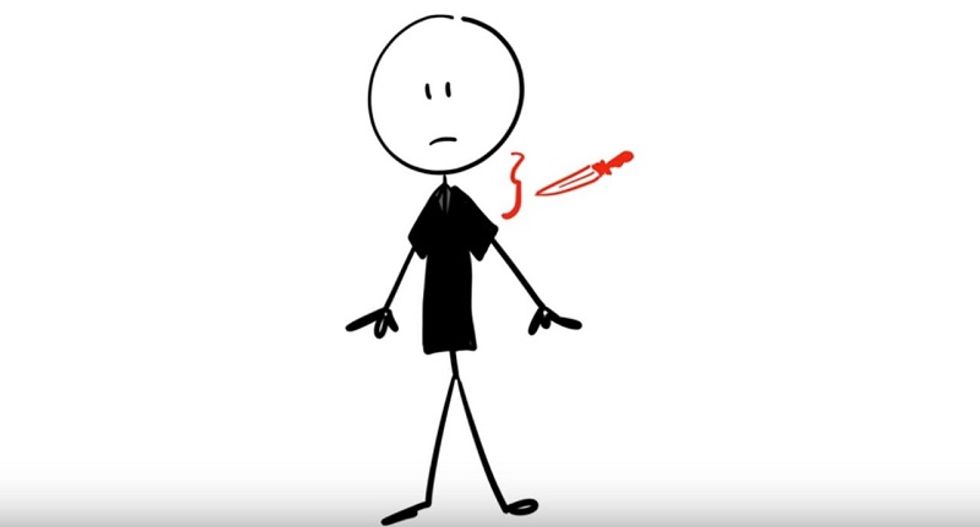 What if people blamed murder victims for the crimes committed against them the way they tend to blame rape victims?

A YouTube video posted by Blue Seat Studios examines that very question. The video, entitled, "James is Dead," shows two cartoon women talking about the murder of the fictional character, James, at a college party.

"I mean, what was he wearing though?" one woman asks. "I mean, you know how he wears those V-neck t-shirts? I'm just saying, if you don't want to get stabbed in the neck, consider wearing a turtleneck sweater or something."

The video comes while the case of Stanford swimer Brock Turner has made headlines. Turner was convicted of sexually assaulting a woman behind a dumpster. Outrage over his lenient sentence of 6 months in jail has caused the story to go viral.

"I'm just saying, if you don't want to get murdered, don't go around talking to strangers at parties and just expect it to be fine," one of the women in the video says. "Did he even blow the murder whistle that Student Life gave us?... Hey maybe James really wanted this to happen."

The dialogue is meant to be representative of the way people talk about rape victims and blame the crime against them on their own behavior, as opposed to the rapist's behavior.

The video ends with the note, "Whether it's murder or sexual assault, it's not the victim's fault."