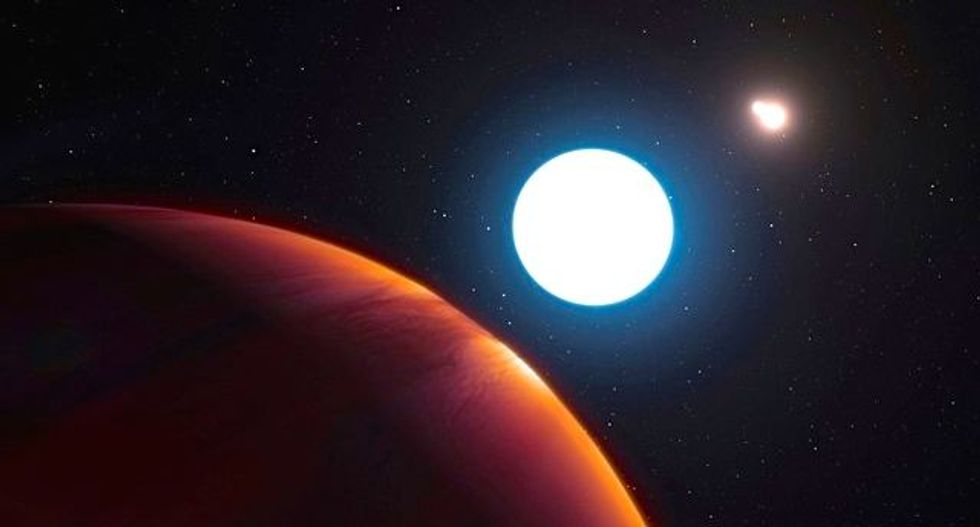 An artist's impression shows a view of the triple star system HD 131399 from close to the giant planet orbiting in the system. Courtesy of ESO/L. Calçada/Handout via REUTERS

Astronomers have discovered a planet unlike any other ever found, one that loops widely around one star that is locked in a gravitational embrace with two others in a triple-star system, creating a curious celestial ballet.

The findings, published on Thursday in the journal Science, challenge current notions about what makes a planetary system viable.

With three stars in the system, the massive planet would experience triple sunrises and triple sunsets during one season and all daylight in another. Since the planet's orbit is very long, each season lasts for hundreds of years.

"Depending on which season you were born in, you may never know what nighttime is like," lead researcher Kevin Wagner of the University of Arizona said.

The planet, called HD 131399Ab, is about four times bigger than Jupiter, the largest planet in our solar system, and is orbiting in a three-star system located about 340 light-years from Earth in the constellation Centaurus.

Scientists are not sure how HD 131399Ab came to exist. It orbits its parent star about twice as far as Pluto circles the sun, needing 550 years to complete a single orbit.

Astronomers have previously discovered planets in multi-star systems, but never one that circles a parent star with such a wide berth. It also is one of the few extrasolar planets - those outside our solar system - to be directly imaged by telescope.

The planet's orbit is akin to the distance more typically seen when a star orbits another star, not a planet orbiting a star.

"This is the first planet that we've found with an orbit that is comparable to that of the stars," Wagner said.

If HD 131399Ab's orbit was just a bit wider, computer simulations show it could be gravitationally elbowed out of the system by the pair of smaller stars that orbit each other and the main star, which is about 80 percent bigger than the sun.

Though the planet is relatively young, around 16 million years old compared to the 4.5-billion-year-old Earth, it likely has had an eventful life. Scientists suspect it may have started off in a much closer orbit around two parent stars before it was gravitationally bounced to its extreme distance.

Scientists plan additional observations to determine if the planet's orbit is actually stable.

"It is not clear how this planet ended up on its wide orbit in this extreme system ... but it shows there is more variety out there than many would have deemed possible," Wagner said.

(Reporting by Irene Klotz; Editing by Will Dunham)