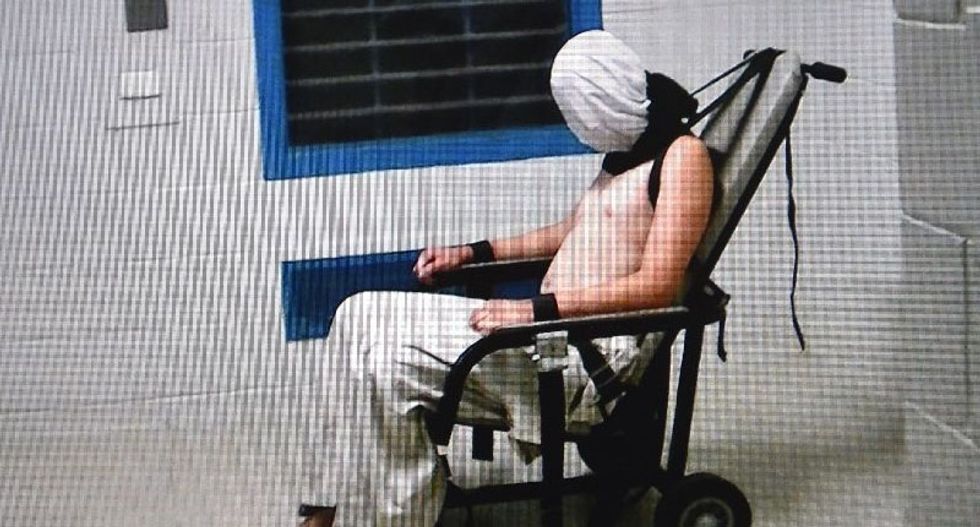 The Australian government ordered an inquiry Tuesday after graphic evidence emerged of prison guards assaulting teenage boys, with one shown hooded and shackled in scenes likened to Guantanamo Bay.

National broadcaster ABC on Monday night showed footage of offenders, many indigenous, being stripped naked, tear-gassed and held in solitary confinement for weeks at a youth detention centre in the Northern Territory in 2014 and 2015.

In one video from last year, a 17-year-old is hooded, shackled to a restraint chair and left alone for two hours.

Prime Minister Malcolm Turnbull said he was "shocked and appalled" at the images from the ABC's Four Corners current affairs programme.

"Like all Australians, I've been deeply shocked -– shocked and appalled by the images of mistreatment of children at the Don Dale Centre," he said.

Turnbull said a royal commission would be established along with the Northern Territory government to investigate the centre.

"This needs a thorough inquiry, we need to move quickly on that, get to the bottom of it and expose what occurred and expose the culture that allowed it to occur and allowed it to remain unrevealed for so long."

Barrister John Lawrence told the ABC a child being hooded and cuffed was reminiscent of Guantanamo Bay, the notorious US military prison in Cuba that holds terror suspects.

"We're talking about kids that are being shackled with handcuffs on their ankles, their wrists, their waist areas. They're being shackled to chairs," said Lawrence, an eminent lawyer and former president of the Northern Territory Bar Association.

"One of them has had the experience of sitting in one for just under two hours with a spit hood over his head, a la Guantanamo Bay," he said.

The Northern Territory has one of the highest crime rates in Australia, with indigenous offenders making up more than two-thirds of the prison population.

According to Amnesty International, Aboriginal children are 26 times more likely to be jailed than their non-indigenous counterparts as they struggle to deal with poor education, high unemployment rates, and substance abuse.

Northern Territory Chief Minister Adam Giles said he was "disgusted" by the revelations, but added he had "full confidence in the majority of custodial officers" working in such institutions.

Giles sacked John Elferink as Corrections Minister and took over the portfolio himself, while ordering police to investigate whether any laws had been broken by the prison guards.

He said the royal commission should not just probe the corrections system but also child protection in the Northern Territory.

"This is not a blame game, this is recognising that there are children who are being neglected, unloved, getting into trouble, causing trouble in the streets and finding their way into our detention facilities."

Human Rights Watch said it had long been urging the government to act on abuses in juvenile detention, and that the Northern Territory was the tip of the iceberg.

Its Australia director Elaine Pearson said what happened at the Don Dale Centre was "a classic example of how not to deal with troubled youth".

"Excessive use of force, isolation and shackling of children is barbaric and inhumane," she said.

"This is not only a matter of training. Better alternatives to locking kids up for prolonged periods must be found," she added.

Save the Children said the inquiry needed to be Australia-wide and not just into the Northern Territory.

"This reprehensible and outrageous behaviour does nothing to help rehabilitate youth offenders who should be supported to prevent them from offending again," said spokesman Mat Tinkler.

"The solution to preventing future abuses is not to lock up children in the first place."