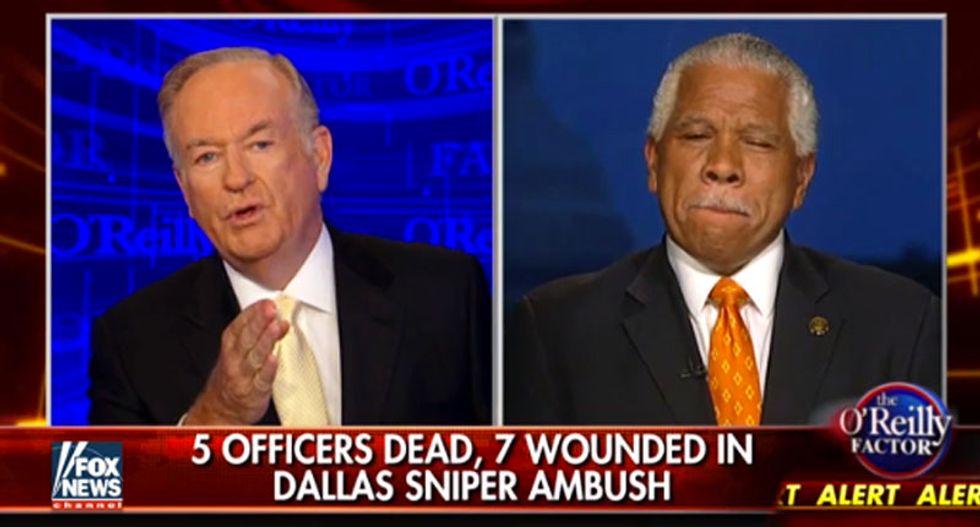 After stating that he had intentionally avoided discussing the shooting deaths of  Alton Sterling and Philando Castile earlier in the week because “emotions were white hot,” Fox News host Bill O'Reilly invited on an NAACP official to lecture him about what "white Americans" think.

While O'Reilly admitted that police had to clean up their act after too many fatal shootings, he focused his ire on the protesters of Black Lives Matter who are attempting to call attention to those shootings.

Speaking with Hilary Shelton, Director of the NAACP Washington Bureau, the Fox News host advised the black leader on what he needs to do to "bring the country back together."

"You know what I think," O'Reilly began. "I think if you really want, if African Americans really want to bring the country together, and have good racial relations, they have to distance themselves from Black Lives Matter. Am I wrong?"

"No, I disagree with you," Shelton replied. "I believe in my conversations with leaders of Black Lives Matter, and even my participation in a demonstration when we marched from the Capital building here in Washington DC and to the White House in a very peaceful demonstration with a number of members of Congress in much the same way those matched in Dallas, Texas, we saw things very differently."

O'Reilly jumped in to state that "African Americans are committing more crimes," which Shelton attempted to dispute only to have O'Reilly talk over him.

When Shelton attempted to point out that BLM marches are "extremely well integrated" with "plenty of white people," O'Reilly cut him off again.

Admitting that the Dallas march was peaceful, O'Reilly then tried to claim that it was not a BLM march, which Shelton again attempted to dispute, with the host, once again talking over him -- saying BLM is a "hate America" group.

Fulton County District Attorney Fani Willis's office on Friday argued that Sen. Lindsey Graham (R-GA) should not be allowed to further stall his testimony before a special grand jury on the grounds that it would "delay the revelation of an entire category of relevant witnesses or information."

As flagged by Politico's Kyle Cheney, the Fulton County DA's office argued that Graham's testimony is "crucial" to the investigation because "he is expected to provide information regarding additional sources of relevant information."