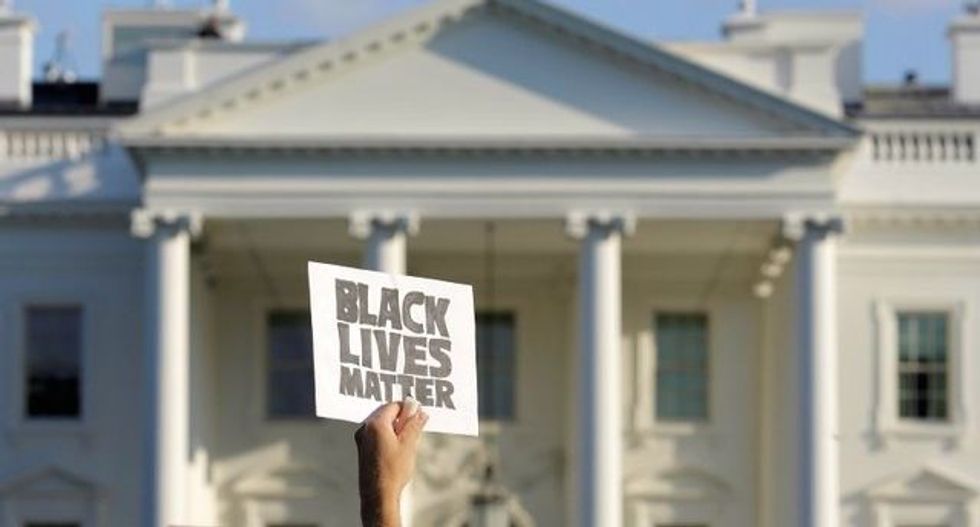 A demonstrator with Black Lives Matter holds up a sign during a protest in front of the White House in Washington, U.S., July 8, 2016. REUTERS/Joshua Roberts

It’s a hash tag, a popular t-shirt slogan and a movement that is loosely organized – by design.

Black Lives Matter was founded by three women who popularized the slogan during protests over the 2012 killing of Trayvon Martin, an African-American teen who was shot by George Zimmerman, a neighborhood watch volunteer in Sanford, Florida.

It has a website (BlackLivesMatter.com) and a network of chapters. But the idea is bigger than the organization.

Although the march where five Dallas police officers were fatally shot Thursday was organized by another group, news reports described it as a Black Lives Matters event.

“The convenient narrative has been for people, for the media to say, ‘Well, this was organized by Black Lives Matter',” said Tezlyn Figaro, a publicist for Next Generation Action Network, the group that organized the event. The rally "had no affiliation with Black Lives Matter."

The confusion flows in part from the decentralized structure of the Black Lives Matter organization and its founders’ desire that it remain open and inclusive.

“Not everyone who shows up at a demonstration is a full-fledged member of BLM, (but) they’re welcomed and encouraged to participate,” Melina Abdullah, a representative of the group’s Los Angeles chapter, said in a conversation with Reuters in June.

During the standoff with police negotiators Thursday, the shooter invoked the slogan, saying he was "upset about black lives matter," according to Dallas Police Chief David Brown.

The organization disavowed the violence in a post on its web page.

“This is a tragedy - both for those who have been impacted by yesterday's attack and for our democracy,” it said.

“There are some who would use these events to stifle a movement for change and quicken the demise of a vibrant discourse on the human rights of Black Americans. We should reject all of this. Black activists have raised the call for an end to violence, not an escalation of it.”

That didn’t stop a wave of social media criticism attempting to tie the violence to the movement. But U.S. Attorney General Loretta Lynch, speaking about the demonstrations inspired by Black Lives and other groups, drew a bright line between the gunman’s actions and “lawful protest and protected speech.”

“Do not be discouraged by those who use your lawful actions as cover for their heinous violence," Lynch said Friday. "We will continue to safeguard your constitutional rights and to work with you in the difficult mission of building a better nation and a brighter future.”

Some said the best way to define the movement is by continuing to push a positive message. After a vigil Friday in Dallas for the slain officers, Richmond Punch played “Amazing Grace” on his violin.

“We need to frame out a way to come back to peace,” said Punch, 35, an African-American Dallas resident and Black Lives Matter contributor. “The guy who committed this act, he doesn't stand for what America is.”

(Additional reporting by Ruthy Munoz in Washington, and Ernest Scheyder and Marice Richter in Dallas. Editing by Jason Szep and Lisa Girion)