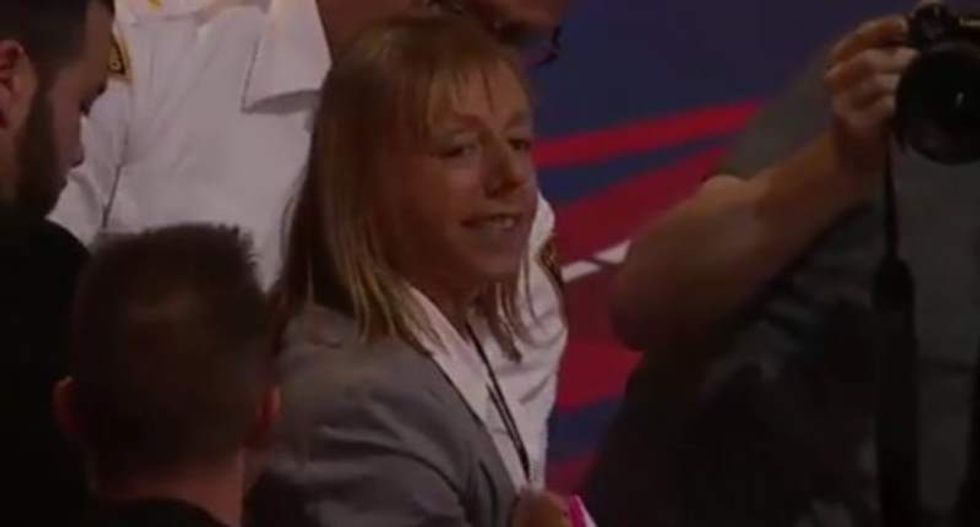 Medea Benjamin of CODEPINK is led out of the Quicken Loans Arena after disrupting Donald Trump's RNC nomination speech on July 21, 2016. (YouTube)

Donald Trump was unable to avoid demonstrations at many of his campaign events this year, and that held true all the way up to his Republican presidential nomination speech on Thursday.

Footage from the event shows CODEPINK founder Medea Benjamin disrupting the event, forcing Trump to stop speaking. In a change of pace, however, Trump did not mock Benjamin has he has other protesters in the past. Instead, he stood near his microphone as Benjamin, who yelled, "Build bridges not walls," was led out of the Quicken Loans Arena in Cleveland.

After she was handcuffed, Trump asked the audience, "How great are our police, and how great is Cleveland?" drawing an ovation.

Benjamin's group released a statement after her protest.

"Scapegoating immigrants and refugees – some of the most marginalized and powerless members of our society – for the problems we face as a nation is deeply racist," Benjamin said. "I rose to disrupt Trump’s ‘victory speech’ tonight to make sure that no one, whether in the arena or watching in their living room, could overlook the horrifying racism, xenophobia, Islamophobia and misogyny that is at the root of Donald Trump’s ideology. We want to build bridges not walls, and we want peace and love, not hate and war."

Watch footage of Benjamin's protest, as posted online, below.