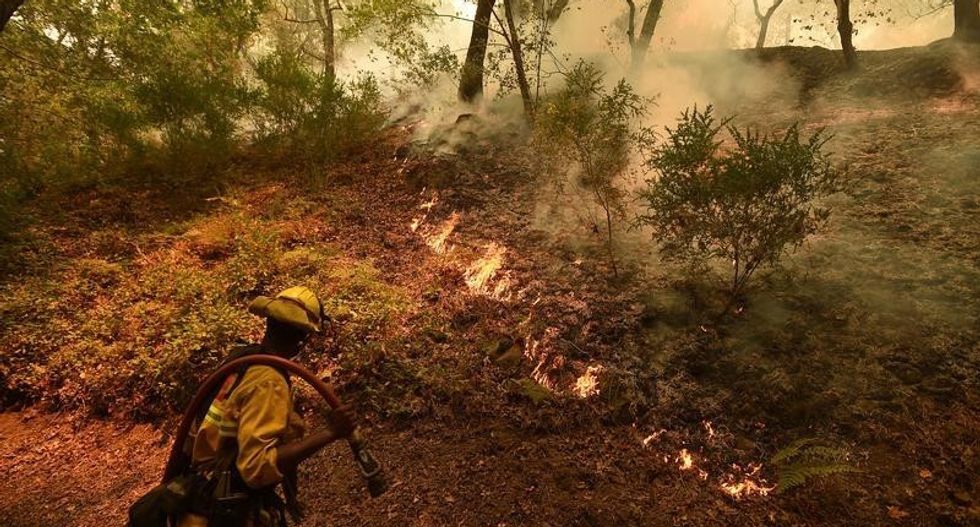 A firefighter passes flames from the Soberanes Fire as it burns the Rancho San Carlos community of Carmel-by-the-Sea, California, U.S. July 27, 2016. REUTERS/Noah Berger

Firefighters struggled on Sunday to slow a deadly wildfire that has raged for 10 days near California's Big Sur coast, destroying dozens of homes and forcing the evacuation of hundreds of residents and campers, authorities said.

The so-called Soberanes Fire, which erupted on July 22 just south of Carmel-by-the-Sea, grew by 3,000 acres (1,214 hectares) overnight and has scorched 38,000 acres of parched chaparral and timberland in and around the Los Padres National Forest.

"Firefighters are meeting challenges due to topography, fuel load, and dry humidity," said Katherine Garver, a spokeswoman for the California Department of Forestry and Fire Protection (Cal Fire). "The fire is making runs into inaccessible areas."

They had hoped that favorable weather conditions would allow progress to be made in containing the blaze, with strong winds that had been driving the fire for days starting to abate.

As of Sunday morning, about 15 percent of the fire's perimeter was contained, officials said.

Steep, rugged terrain, combined with extremely hot, dry weather, is still hampering the efforts of some 5,300 firefighters, 16 helicopters, a half dozen air tankers and more than 500 fire engines.

The cause of the blaze, which officials do not expect to be fully contained until the end of August, is under investigation.

Flames have already destroyed 57 homes and 11 outbuildings, with at least five other structures damaged, according to the latest tally. Another 2,000 structures were threatened, with an estimated 350 residents displaced by evacuations unrelated to those in the area of the Zen Center, officials said.

The fire threat has prompted authorities to close a string of popular California campgrounds and recreation areas along the northern end of the Big Sur coastline, including Point Lobos Natural Reserve.

Highway 1, the scenic route that winds along seaside cliffs overlooking the Pacific, remained open, though motorists were advised to allow for traffic delays caused by firefighting equipment entering and exiting the roadway.

The blaze took a deadly turn on Tuesday when a bulldozer operator hired by property owners to help battle the flames was killed when his tractor rolled over. It was the second California wildfire-related death in a week.

(Writing and additional reporting by Frank McGurty in New York and Sharon Bernstein in Sacramento, California; Editing by Sandra Maler and Paul Simao)