Comedy Central sues Stephen Colbert for playing himself on CBS: I do 'not own my face or name' 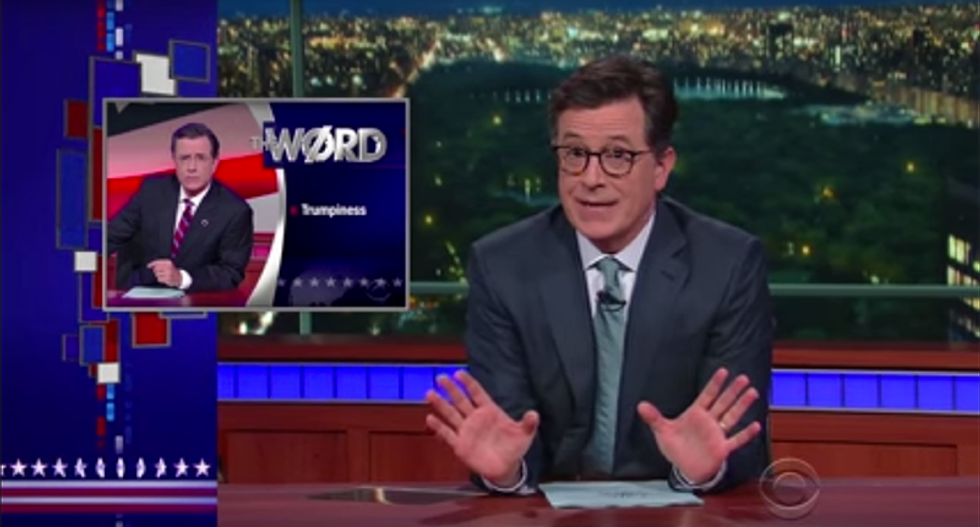 After Stephen Colbert did a version of "The Word" for his "Late Show" audience, the attorneys at Comedy Central contacted CBS to claim that they own the intellectual property of "Stephen Colbert," the character.

"Which, is surprising, because I never thought of that guy as much of an intellectual," Colbert joked on Wednesday night. "So it is with a heavy heart that I announce that thanks to corporate lawyers, the character of Stephen Colbert host of 'The Colbert Report,' will never be seen again."

Way to go, Comedy Central. The audience booed in protest, but corporations are corporations.

"I feel the same way, but what can I do?" Colbert asked his audience. "The lawyers have spoken. I cannot reasonably argue that I own my face or name. And as much as I would like to have that guy on again, I can't."

"That's my twin cousin. This is my first appearance on television ever!" new Colbert explained while wearing an American flag shirt.

New Colbert explained that "our moms were identical twins, who married identical twin husbands, then had sex at the exact same moment and gave us the same name." It seems logical, right? This is, after all, the entire premise on which "The Patty Duke Show" was built.

"Most of all, Stephen, I want you to know," new Stephen began. "I'm happy to be here tonight to save this country and join the 'Late Show' team." He promised that even wild horses ridden by corporate lawyers couldn't keep him away.

Because Colbert can no longer do "The Word" segment, he created a new segment called, "The Werd."

Colbert explained that we know for certain that this November will be Hillary Clinton against Donald Trump. On the screen then flashed "pantsuit vs. lawsuit."

"The polls show we've already decided on the outcome that we really want," Colbert said, while the words "Canadian citizenship" flashed on the screen beside him. "See, we want neither. Both Clinton and Trump have historically low approval ratings. In fact, 52 percent of Trump supporters say they're only voting for him because they don't want Hillary to win." Colbert doesn't blame him, "after all, Donald Trump is a hard man to stand behind," Colbert continued as the words "Just ask Chris Christie" appeared on the screen beside him.

As for Clinton, 56 percent of Clinton supporters say that they just don't want Donald Trump to win. "Hillary's critics see her as untrustworthy, selfish and too willing to bend the rules," Colbert said, while "And that's just Bernie" appeared on the screen. Trump's critics, on the other hand, argue "he's prejudiced, unprepared and has the wrong temperament for a president." It's shocking since, as the Colbert sidebar informs us, his supporters say pretty much the same thing.

Colbert explained that these two brands are already decades in to establishing their identities. He called Clinton "Wonder Bread" and Trump the "McDonald's Angry Meal." Both candidates already understand this, "that's why this is going to be the most negative campaign in history. Hillary Clinton will say things that makes Trump seems racist," he said as "and so will Trump" appeared on the screen. "Trump will attack Hillary's integrity," he said, while "and Russia will attack her email server" flashed beside him. There's so much negativity, Colbert even proposed writing in "Michelle" as another option.

His solution is that we can have people vote against a candidate. So, the ultimate winner will be the candidate with the lowest score. "But on the outside chance they do not institute my plan, no matter how you feel about the candidates, please, you still have to go to the polls on Election Day. Yes, you might have to vote for a person you don't really want. But it's better than getting the person you really don't want." On the screen beside him flashed "the lesser of two evils."

Check out the totally legal video below: