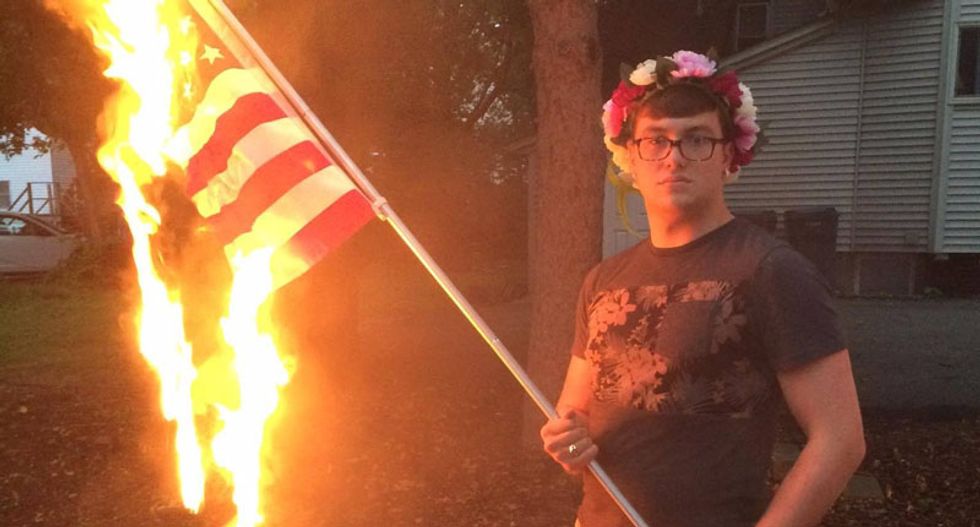 An Illinois man who posted a picture of himself on Facebook with a burning American flag was taken into custody on July 4th after police became concerned over threats of violence against him as well as for his fellow co-worker's safety.

Bryton Mellott,22, of Urbana was charged under an Illinois state statute banning flag desecration before being released, reports the News-Gazette.

Mellott posted the photo on July 3rd, under the hashtag #youbetterburnthatflag, setting off a social media firestorm after it was shared over 10,000 times.

Urbana police became involved after receiving calls concerning death threats against Mellott, as well threats against his place of employment, a local Walmart which was receiving hundreds of angry phone calls.

According to a police spokesperson, “The volume of responses and specificity of threat against his place of employment (a location where an act of violence would likely cause harm to others), prompted police involvement in this case.”

Urbana Police Sgt. Andrew Charles explained that police spoke with Mellott and with his employers and acknowledged that they “understood his freedom of speech,” but that they were concerned for his safety along with their belief that his Facebook posts were putting others at risk.

According to Charles, when Mellott continued to make similar posts on Facebook, police took him into custody with the spokesperson saying people are free to express themselves by saying  inflammatory things but they were concerned about violence at his place of work.

“We are trying to ensure his safety as much as we can and their (Wal-Mart) business, too,” Charles explained.

The charges of flag desecration flies in the face of a Supreme Court ruling calling it freedom of speech.

Mellott has not taken down the photo and is now using it as his profile picture.

His most recent Facebook post simply states: "So it'd be super-duper if the death threats could stop."