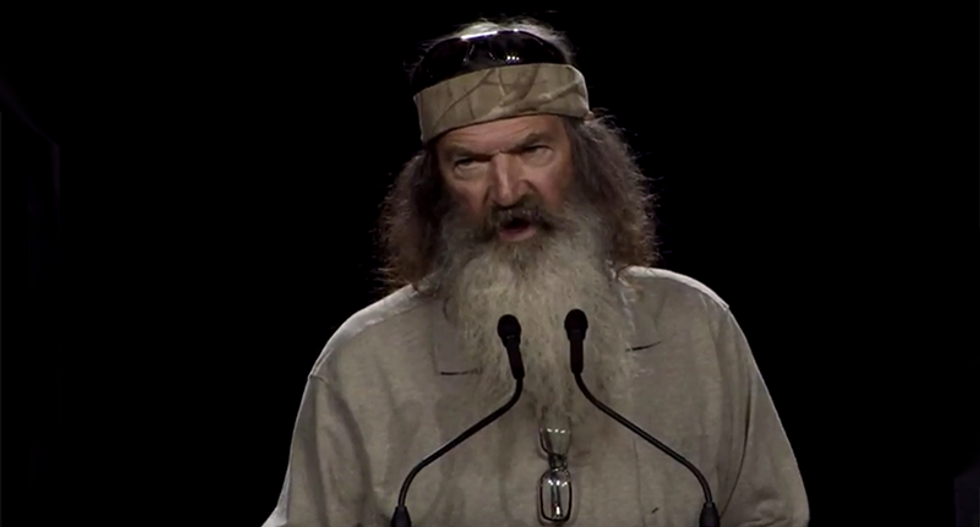 Duck Dynasty dad Phil Robertson had some of his trademark Christian wisdom at the Western Conservative Summit in Denver, Colorado this weekend to help enlighten people how he knows Jesus is really the son of God.

"If your calendar is dated of all the human beings who have ever walked on the Earth, and your calendar is dedicated and predicated to just one of ’em, evidently something rather large went down," Robertson explained.

That’s good to know, especially for worshipers of Roman gods like Janus and Mars, who are also immortalized in our calendars, dude.

As his speech continued, Robertson went down the rabbit hole of opposition to the wars in Iraq and Afghanistan after 9/11. He explained that 160,000 murders occurred. The reason for this, Robertson says, is because of the gay and transgender Americans.

"When you allow men to determine what's right and what's wrong, you get decisions like the five judges saying, 'I may not know we have 7,000 years of history of men marrying women. A male and a female. For that reason, they'll leave their father and mother and cleave to one and other and become one flesh. I know it's been that way for 7,000 years, but we know best for what's everybody.'" Robertson said criticizing the U.S. Supreme Court's decision to legalize same-sex marriage last year.

Robertson also blames transgender people for the downfall of western civilization. "Now there's grown men barging in on you ladies while you're putting your Maybelline on," he continued. "Here's a newsflash, you see this," he said, tugging on his beard. "This be male," he said, clearly not having met a post-menopausal woman. He then pledged never to come into a lady's restroom.

Check out the videos via Mediaite:

Duck Dynasty Dude Hilariously Proves Beyond a... by DailyPolitics

Phil robertson who's behind it by DailyPolitics