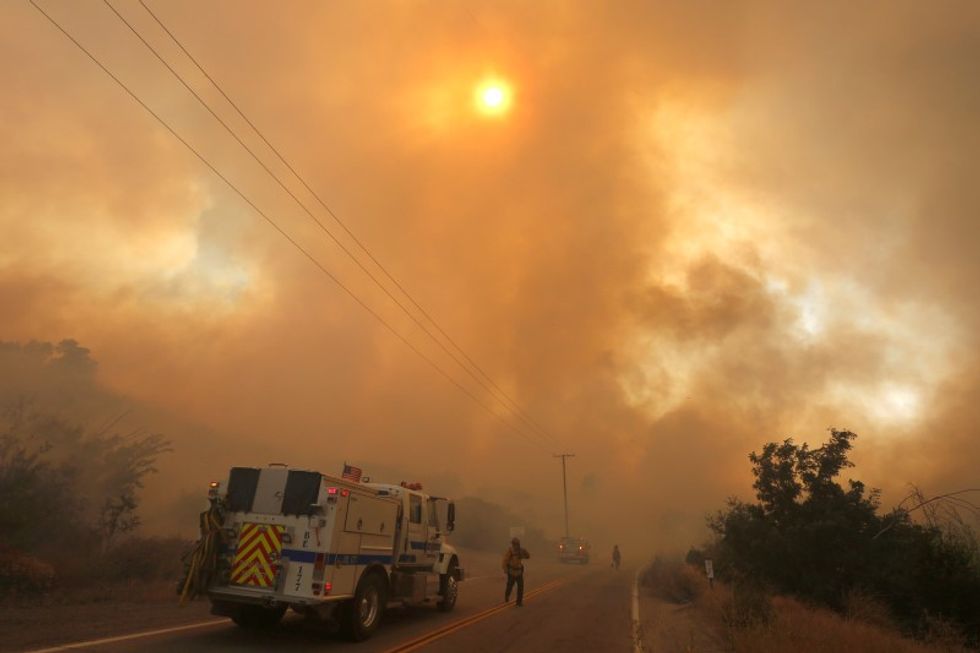 Firefighters struggled on Sunday to contain a fast-spreading wildfire that killed at least one person, destroyed 18 homes, closed a highway and forced hundreds of evacuations in the drought-parched canyons north of Los Angeles.

The Sand Fire grew overnight to 22,000 acres (8,900 hectares), or more than 34 square miles (88 square km), fueled by high winds and parched conditions after years of drought.

It was threatening a string of small communities near Santa Clarita, just outside the Angeles National Forest, the Los Angeles County Sheriff's Department said in a statement.

One person suffered non-life-threatening injuries and one structure was destroyed, Anderson said.

The Santa Clarita-area fire, first reported on Friday afternoon, has forced at least 1,500 residents to evacuate their homes and destroyed at least 18 homes, the Los Angeles County Fire Department said in a statement.

All the affected communities, about 40 miles (65 km) northwest of downtown Los Angeles, are in or around the San Gabriel Mountains. The area is dotted with multimillion-dollar homes.

Some 100 commercial buildings in the path of the fire are under mandatory evacuation orders, fire officials said.

The Los Angeles County Fire Department tweeted on Sunday afternoon that an "unexpected wind event" forced officials to rescind a plan to allow residents to re-enter certain areas. "All evacuations will remain in place," the department said.

The California Highway Patrol tweeted that the 14 Freeway was closed to traffic in both directions because of the fire threat.

The remains of an unidentified person were found late on Saturday inside a charred vehicle in the path of the blaze. The exact cause of death had not been immediately determined, fire officials said.

They added that they expected extreme heat, strong winds and parched rugged terrain to continue to hamper the efforts of the more than 1,600 firefighters battling the blaze.

The wildfire was only 10 percent contained on Sunday and the cause of was still under investigation.

"This is the fifth year of an ongoing drought, so we have very extreme fire behavior," Los Angeles County Fire Department Chief Daryl Osby said at a news conference on Sunday afternoon. "These are not normal times."

(Reporting by Laila Kearney in New York and Eric M. Johnson in Seattle; Editing by Tom Brown and Peter Cooney)