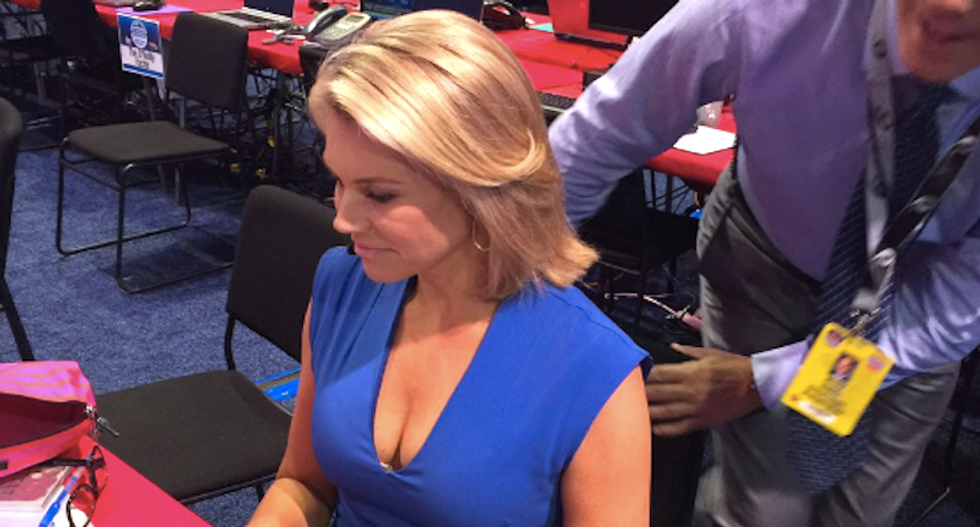 "Fox and Friends" tweeted -- and then deleted -- a revealing photo of a woman anchor as a male colleague sneaks up behind her as a prank.

The photo is centered on news anchor Heather Nauert's cleavage, which is revealed in a low-cut sleeveless dress, as she's working at her desk.

Nauert doesn't appear to be particularly amused by her colleague, Bill Hemmer, who places his hands on the back of her chair "as she follows the headlines," according to the caption.

The conservative news network is battling accusations of sexual harassment, bullying and intimidation made by women who've worked there, including former "Fox and Friends" host Gretchen Carlson.

Carlson sued Fox News and its now-deposed CEO, who she accused of soliciting sex and then firing her when she refused.

She also accused "Fox and Friends" host Steve Doocy of sexual harassment, which other employees say they witnessed.

The New York Times reported that many women who've worked for Fox News said they were told to perform sexual favors and suffered constant harassment on the job.

Men who worked for the network made crude remarks about women and tried to coerce junior employees into dating more highly placed employees, who regularly asked women deeply personal questions about their sex lives.

All of the women who spoke to the newspaper said they were afraid to bring their concerns to human resources because they feared they would be fired.