French priest killed by attackers 'claiming allegiance to IS' 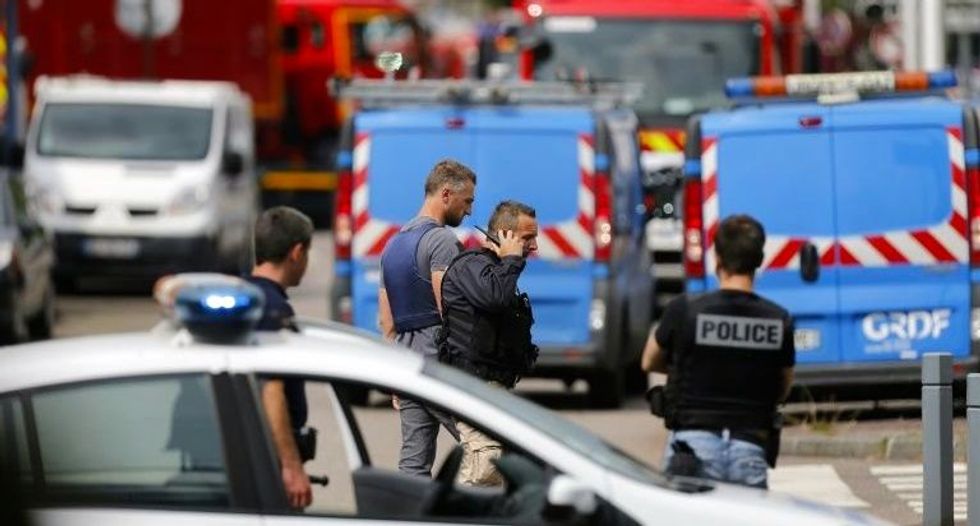 French President Francois Hollande said two assailants who stormed a Normandy church and slit the throat of an elderly Catholic priest on Tuesday had claimed allegiance to the Islamic State group.

The hostage drama in the Normandy town of Saint-Etienne-du-Rouvray further stunned a nation already shaken to its core after a massacre in the French Riviera city of Nice less than two weeks ago, which was claimed by IS.

Hollande condemned the "cowardly murder of the parish priest by two terrorists claiming to be from Daesh", using an Arabic term for the Islamic State group.

Hollande appealed for "unity" in France, where political blame trading has poisoned the aftermath of the truck attack, the third major strike in the country in 18 months.

The Paris prosecutor's office said the case was being handled by anti-terrorism prosecutors.

He said the church was surrounded by France's anti-gang brigade the BRI, which specialises in kidnappings, and that "the two assailants came out and were killed by police".

The priest died after his throat was slit, sources close to the investigation told AFP. The archbishop of the nearby city of Rouen, Dominique Lebrun, named him as 84-year-old Jacques Hamel.

However the archbishopric's website states he was born in 1930.

Three of the hostages were freed unharmed, and another was fighting for their life, said Brandet.

Pope Francis voiced his "pain and horror" at the "barbaric killing" of the priest.

France remains on high alert after Tunisian Mohamed Lahouaiej Bouhlel ploughed a truck into a crowd of people celebrating Bastille Day in Nice on July 14, killing 84 people and injuring over 300.

Prime Minister Manuel Valls expressed his horror at what he called "a barbaric attack on a church".

"The whole of France and all Catholics are wounded. We will stand together," he wrote on Twitter.

Lebrun urged all non-believers to join those of the church in "calling to God".

"The Catholic Church can take up no other weapons than prayer and fraternity between men," he said in a statement.

France has been a prime target of the Islamic State group, which regularly calls for supporters to launch attacks against the country.

France is involved in carrying out air strikes against the jihadists in Iraq and Syria.

Attacks in Belgium in March, and in Germany this week, have also increased jitters across Europe.

After Nice, France extended a state of emergency giving police extra powers to carry out searches and place people under house arrest for another six months until January.

It was the fourth time the security measures have been extended since IS jihadists struck Paris in November, killing 130 people in a wave of bombings and shootings at restaurants, a concert hall and the national stadium.

Valls had warned earlier this week that the country will face more attacks as it struggles to handle extremists returning from jihad in the Middle East and those radicalised at home by devouring propaganda on the internet.

France has been concerned about the threat against churches ever since Sid Ahmed Ghlam, a 24-year-old Algerian IT student, was arrested in Paris in April last year on suspicion of killing a woman who was found shot dead in the passenger seat of her car, and of planning an attack on a church.

Prosecutors say they found documents about Al-Qaeda and IS at his home, and that he had been in touch with a suspected jihadist in Syria about an attack on a church.

As part of beefed up security operations in France, some 700 schools and Jewish synagogues and 1,000 mosques are under military protection.

However with some 45,000 Catholic churches, and thousands more Protestant and evangelical churches, protecting all places of worship is a massive headache for security services.

The Nice massacre triggered a bitter political spat over alleged security failings, with the government accused of not doing enough to protect the population.