GOP strategist: Trump knows his fans are guys 'screaming for hot pockets and a new Holocaust' 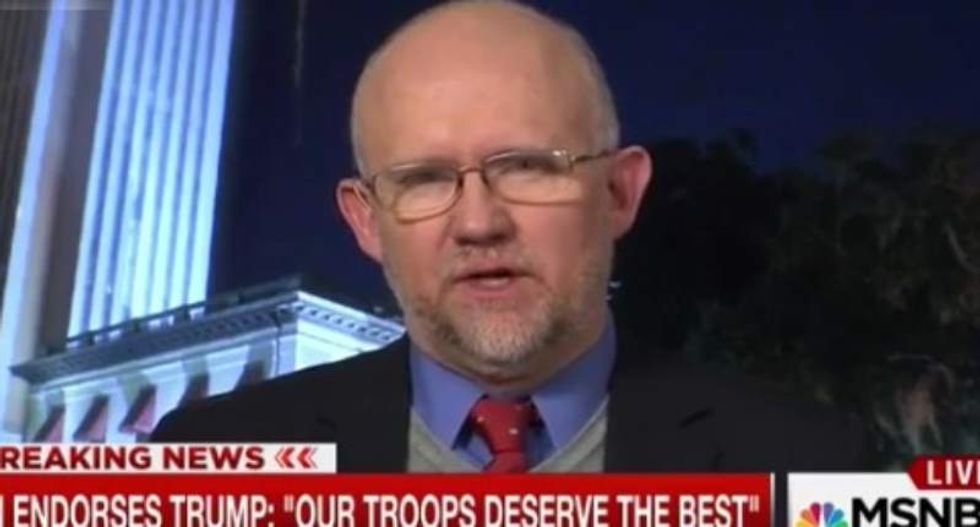 "This is a guy who understands that the center of his play is this deeply resentful, edge case group of people who really believe that the Jews control the world, and that white nationalism is the future of American politics," Wilson told MSNBC host Chris Hayes. "And they range in sophistication from, you know, the guys who are fairly clever race-baiters who try to stay out of the dirtier slums to the crazies in mom's basement screaming for hot pockets and a new Holocaust."

The GOP's presumptive presidential nominee was criticized yet again over the weekend after he shared a picture online depicting Hillary Clinton next to a Star of David and atop a pile of money which was traced back to a Twitter user who has regularly shared anti-Semitic images.

"At one level, it's like if it were any other campaign, you'd look at this and be like, 'Well that was a dumb oversight,'" Hayes said. "But it's because of how consistent this has been that you're now litigating the origins of what I think is an image that if you passed by any competent staffer -- Republican, Democrat, independent, left or right -- would immediately say, 'Obviously, obviously do not associate that with the official campaign account.'"

"As I put it, the dominant semiotic weight of a Star of David over a pile of money is not 'a sheriff,'" Wilson replied, adding, "This is a guy who understands this. These people know what's going on."

Wilson argued that Trump's social media team is seeking this kind of forum online while his campaign is "terrified" of objecting to such a practice.

"Good job, Reince," Wilson sarcastically said, referencing Republican National Committee chair Reince Priebus. "Good job everybody else who's endorsed this guy, because you're gonna get the stink of his continued flirtation with the scuzzier part of the anti-Semitic Internet and the racist Internet all over you."