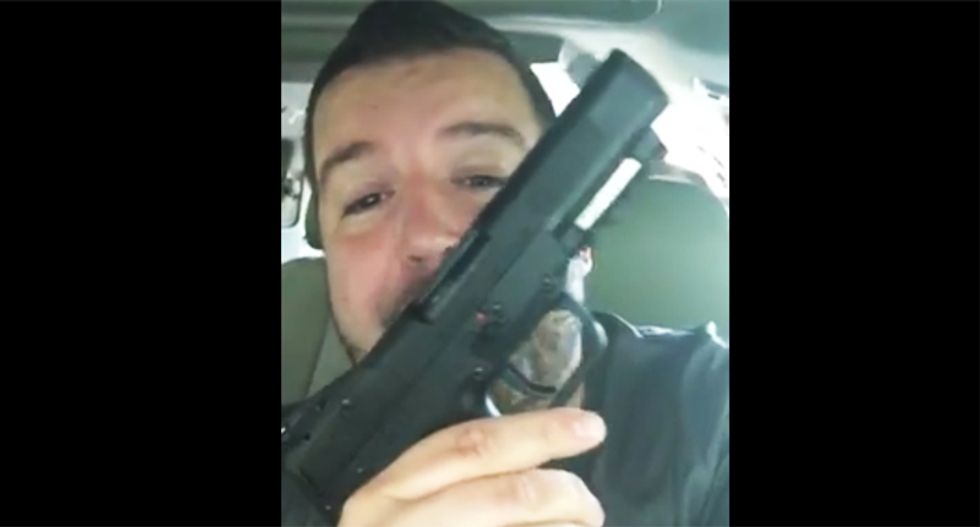 An online pastor with a history of latching onto whatever seems controversial at any given moment, took to his Facebook page on the Lord's Day to promise to shoot anyone he sees who threatens a cop.

Josh Feuerstein, normally seen in his Facebook rants sporting a backwards red ball cap, filmed himself waving a FN Five-Seven -- also known as a "cop killer" gun due to its firepower -- while railing about the recent shootings of police officers, reports the Friendly Atheist.

Without specifically mentioning Black Lives matter -- calling it "this movement' -- Feuerstein complained, "we have this movement in America that is absolutely degrading the lives of good police officers."

"Today, we’ve got kids that are growing up in these different homes where the parents are not respecting police or cussing them out and callin’ ’em pigs, telling kids not to trust ’em. That’s the problem!" he continued.

As he stated that he open carries a handgun, holding it up for the camera, the frantic Feuerstein started making threats -- in the name of Jesus.

"I love Jesus. I love Jesus. I’m a preacher, but you know what? I also carry an FN Five-seven. Filled with 20 rounds of pure brutality right there," he blustered. "Look. I may love Jesus but if I see you pull a gun on an officer, you want to know whose side I’m on? That’s right. I’m gonna fill you with 60 rounds of pure lead. And I guarantee you you’re gonna have lead poisoning."