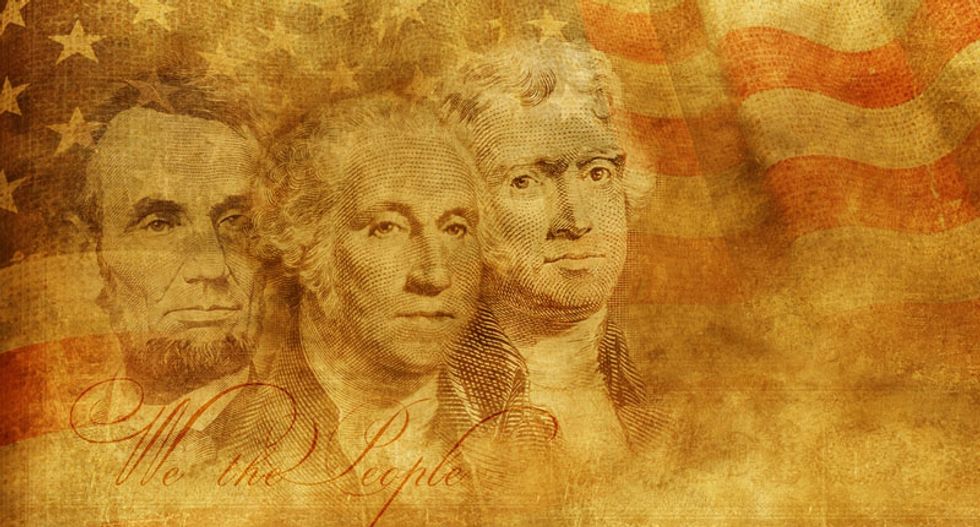 #1 Independence Was Declared on the Fourth of July.

So what happened on the Glorious Fourth? The document justifying the act of Congress-you know it as Thomas Jefferson's Declaration of Independence-was adopted on the fourth, as is indicated on the document itself, which is, one supposes, the cause for all the confusion. As one scholar has observed, what has happened is that the document announcing the event has overshadowed the event itself.

When did Americans first celebrate independence? Congress waited until July 8, when Philadelphia threw a big party, including a parade and the firing of guns. The army under George Washington, then camped near New York City, heard the new July 9 and celebrated then. Georgia got the word August 10. And when did the British in London finally get wind of the declaration? August 30.

John Adams, writing a letter home to his beloved wife Abigail the day after independence was declared (i.e. July 3), predicted that from then on"the Second of July, 1776, will be the most memorable Epocha, in the History of America. I am apt to believe it will be celebrated, by succeeding Generations, as the great anniversary Festival." A scholar coming across this document in the nineteenth century quietly" corrected" the document, Adams predicting the festival would take place not on the second but the fourth.

#2 The Declaration of Independence was signed July 4.

Hanging in the grand Rotunda of the Capitol of the United States is a vast canvas painting by John Trumbull depicting the signing of the Declaration. Both Thomas Jefferson and John Adams wrote, years afterward, that the signing ceremony took place on July 4. When someone challenged Jefferson's memory in the early 1800's Jefferson insisted he was right. The truth? As David McCullough remarks in his new biography of Adams,"No such scene, with all the delegates present, ever occurred at Philadelphia."

So when was it signed? Most delegates signed the document on August 2, when a clean copy was finally produced by Timothy Matlack, assistant to the secretary of Congress. Several did not sign until later. And their names were not released to the public until later still, January 1777. The event was so uninspiring that nobody apparently bothered to write home about it. Years later Jefferson claimed to remember the event clearly, regaling visitors with tales of the flies circling overhead. But as he was wrong about the date, so perhaps he was wrong even about the flies.

The truth about the signing was not finally established until 1884 when historian Mellon Chamberlain, researching the manuscript minutes of the journal of Congress, came upon the entry for August 2 noting a signing ceremony.

As for Benjamin Franklin's statement, which has inspired patriots for generations,"We must all hang together, or most assuredly we shall hang separately" … well, there's no proof he ever made it.

Well of course you know now that this event did not happen on the fourth. But did it happen at all? It's a famous scene. A young boy with bond hair and blue eyes was supposed to have been posted in the street next to Independence Hall to give a signal to an old man in the bell tower when independence was declared. It never happened. The story was made up out of whole cloth in the middle of the nineteenth century by writer George Lippard in a book intended for children. The book was aptly titled, Legends of the American Revolution. There was no pretense that the story was genuine.

If the Liberty Bell rang at all in celebration of independence nobody took note at the time. The bell was not even named in honor of American independence. It received the moniker in the early nineteenth century when abolitionists used it as a symbol of the antislavery movement.

If you visit the Liberty Bell in Philadelphia, encased in a multi-million dollar shrine (soon to be replaced by an even grander building), a tape recording made by the National Park Service leaves the impression that the bell indeed played a role in American independence. (We last heard the recording three years ago. We assume it's still being played.) The guides are more forthcoming, though they do not expressly repudiate the old tradition unless directly asked a question about it. On the day we visited the guide sounded a bit defensive, telling our little group it didn't really matter if the bell rang in American independence or not. Millions have come to visit, she noted, allowing the bell to symbolize liberty for many different causes. In other words, it is our presence at the bell that gives the shrine its meaning. It is important because we think it's important. It's the National Park Service's version of existentialism.

As for the famous crack … it was a badly designed bell and it cracked. End of story.

A few blocks away from the Liberty Bell is the Betsy Ross House. There is no proof Betsy lived here, as the Joint State Government Commission of Pennsylvania concluded in a study in 1949. Oh well. Every year the throngs still come to gawk. As you make your way to the second floor through a dark stairwell the feeling of verisimilitude is overwhelming. History is everywhere. And then you come upon the famous scene. Behind a wall of Plexiglas, as if to protect the sacred from contamination, a Betsy Ross manikin sits in a chair carefully sewing the first flag. Yes, ladies and gentlemen, this is where Betsy sewed that first famous symbol of our freedom, the bars and stripes, Old Glory itself.

Alas, the story is no more authentic than the house itself. It was made up in the nineteenth century by Betsy's descendants.

The guide for our group never let on that the story was bogus, however. Indeed, she provided so many details that we became convinced she really believed it. She told us how General George Washington himself asked Betsy to stitch the first flag. He wanted six point stars; Betsy told him that five point stars were easier to cut and stitch. The general relented.

After the tour was over we approached the guide for an interview. She promptly removed her Betsy Ross hat, turned to us and admitted the story is all just a lot of phooey. Oh, but it is a good story, she insisted, and one worth telling.

Poor Betsy. In her day she was just a simple unheralded seamstress. Now the celebrators won't leave her alone. A few years ago they even dug up her bones where they had lain in a colonial graveyard for 150 years, so she could be buried again beneath a huge sarcophagus located on the grounds of the house she was never fortunate enough to have lived in.

So who sewed the first flag? No one knows. But we do know who designed it. It was Frances Hopkinson. Records show that in May 1780 he sent a bill to the Board of Admiralty for designing the"flag of the United States." A small group of descendants works hard to keep his name alive. Just down the street from Betsy's house one of these descendants, the caretaker for the local cemetery where Benjamin Franklin is buried, entertains school children with stories about Hopkinson, a signer of the Declaration, who is also credited with designing the seal of the United States. We asked him what he made of the fantasies spun at the Betsy Ross house. He confided he did not want to make any disparaging remarks as he was a paid employee of the city of Philadelphia, which now owns the house.

The city seems to be of the opinion that the truth doesn't matter. Down the street from the cemetery is a small plaque posted on a brick building giving Hopkinson the credit he rightly deserves.

As long as the tourists come.

#5 John Adams and Thomas Jefferson Died on the Fourth of July.

Ok, this is true. On July 4, 1826, Adams and Jefferson both died, exactly fifty years after the adoption of Jefferson's Declaration of Independence, which the country took as a sign of American divinity. But there is no proof that Adams, dying, uttered,"Jefferson survives," which was said to be especially poignant, as Jefferson had died just hours before. Mark that up as just another hoary story we wished so hard were true we convinced ourselves it is.

Have a Happy Fourth!

Rick Shenkman is the editor of the History News Network and the author of the forthcoming book, Political Animals: How Our Stone-Age Brain Gets in the Way of Smart Politics (Basic Books, 2015).

This article was originally published by History News Network