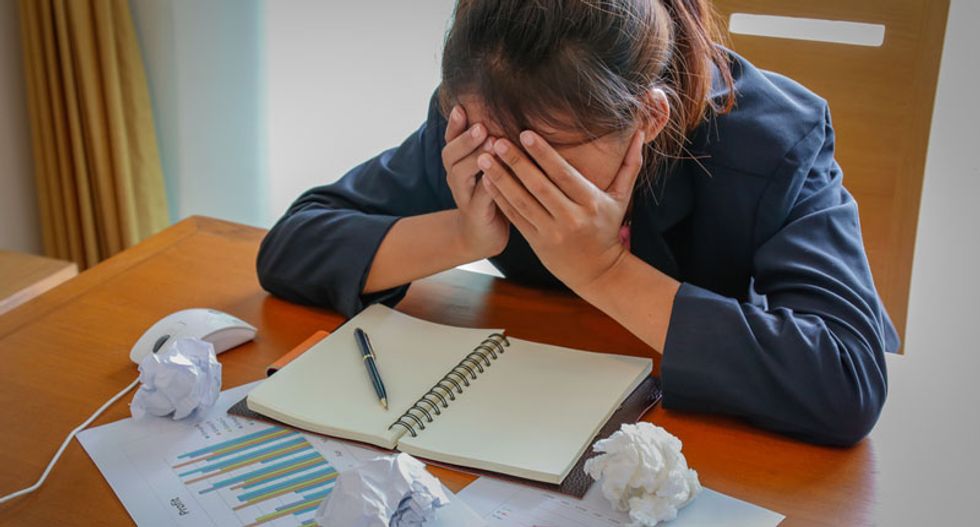 You hear a lot about millennials being in a tight spot financially, but less about the generation sandwiched between them and the baby boomers: Generation X. The oldest Gen-Xers were born in the mid-1960s and are now in their early 50s; many other Xers are well into their 40s, and they've suffered the brunt of several economic downturns.

Gen-X, which started in 1965, could be characterized as the first post-New Deal generation. Xers hit adulthood at a time when Reaganomics, trickle-down economics and neoliberalism were eroding the protections brought about by President Franklin Delano Roosevelt’s New Deal and enhanced by President Lyndon B. Johnson’s Great Society. Gen-Xers have experienced much economic uncertainty during their working lives. The WWII and post-war workplace of the 1940s, 1950s and 1960s—with its heavy unionization, generous benefits and pensions—has been foreign to them. Economically, Gen-X has a major stake in the November election, especially considering that 14 years from now in 2030, Gen-X will begin to turn 65.

Below are 10 daunting economic challenges Gen-X faces as it grows old.

Earlier this year, Fidelity Investments released a report on retirement preparedness among Americans, which found that more than half of Americans are at risk of not being able to cover essential expenses when they retire. A score greater than 95 was given to Americans who Fidelity considered to be in great shape for retirement, while a score of 81-95 meant being on track for essential expenses during retirement but not discretionary expenses like travel and entertainment. A score of 65-80 was given to Americans who were “not on track” for retirement, and less than 65 meant being way off track for retirement. Fidelity’s overall score for baby boomers was 82, compared to only 73 for Gen-X. In other words, Gen-X’s overall savings are painfully low. And at the rate they’re going, Gen-X will have a hard time covering essential expenses like food, shelter and utilities when they reach old age—let alone have enough to enjoy things like live concerts or travel.

In 2014, a study by economists William Emmons and Bryan Noeth took a look at debt and age among Americans—and Gen-X turned out to have much higher debts than previous generations. Emmons and Noeth found that the average American born in 1970 had roughly 60 percent more debt than someone born in 1956. Gen-X, according to the economists, was taking much longer to pay down its debt than previous generations. X-ers have lived through three economic downtowns: the recessions of the early 1990s and early 2000s and worst of all, the Panic of 2008, and it is easy to fall into debt when one experiences a great deal of economic volatility and periods in which income doesn’t keep up with living expenses. A 2015 study by the Allianz Life Insurance Company found that way too many X-ers were using credit as a survival tool: 46 percent of X-ers in the study had revolving credit card debt compared to only 32 percent of baby boomers.

3. Millions of Gen-Xers are still renting.

Encouraging home ownership was one of the many positive things President Franklin Delano Roosevelt accomplished with his New Deal; as FDR saw it, widespread home ownership was a crucial element of having a strong, robust middle class. The fact that so many members of the World War II generation, the Silent Generation and the Baby Boom generation became homeowners in the U.S. underscores the New Deal’s positive impact. But with Gen-X, there is a widespread move away from home ownership. According to a report released by the Urban Institute earlier this year, 19 million renters in the U.S. are former homeowners—and 31 percent of that 19 million are aged 36-45, while 26 percent are aged 46-55. Laurie Goodman, one of the authors of the study, told the Huffington Post’s Shane Ferro that she was struck by how heavily Gen-X weighs in the number of foreclosures brought about by the Great Recession. And Goodman said that while low credit scores created during bad economic times can be repaired eventually, the housing crisis left a major scar on Gen-X by “permanently raising the number of renters.”

4. For Gen-X, the path to retirement is full of uncertainty.

When the Silent Generation was entering the workforce in the 1950s and baby boomers were entering the workforce in the 1960s and 1970s, their path to retirement often consisted of Social Security on the government side and defined benefit pensions via the private sector. Savings accounts, CDs and IRAs were other good ways to save back when banks still paid decent interest rates. But Gen-Xers who entered the workforce in the 1980s or 1990s are facing a much more uncertain and rockier future when it comes to retirement. Traditional pensions barely exist anymore and are a foreign concept to most Xers. And according to the Employee Benefit Research Institute, the 401(k) plans that have replaced pensions aren’t providing enough nest egg for aging Americans: in 2015, EBRI reported that the median amount in a 401(k) in the U.S. was only $18,433 and that 40 percent of workers had less than $10,000 in their 401(k) plans. Obviously, it is no longer a safe bet to park savings in a savings account earning almost no interest, but Gen-Xers are not saving or investing enough, period.

5. Lingering effects of the Great Recession.

One advantage that Gen-X has had over millennials is the fact that Gen-X was part of the workforce during the prosperity of the mid- to late-1990s and the Bill Clinton-era tech boom, whereas many millennials had the misfortune of entering adulthood either during George W. Bush’s eight disastrous years as president or after the devastating crash of September 2008. Nonetheless, Gen-X has been slammed hard by the Great Recession; Pew Research, in 2013, reported that Gen-X lost almost half its wealth during the worst of the Great Recession. And considering that 2030 is only 14 years away, they don’t have that long to turn things around.

6. The gig economy is a rocky road for Gen-X.

Gen-Xers were often stereotyped as “slackers” during the early 1990s recession, but the economic boom of the mid- to late-'90s exploded that myth: Gen-Xers proved to be resourceful, entrepreneurial, tech-savvy workaholics, who in many cases, took full advantage of the prosperity of the Clinton years. Gen-X, according to a 2012 report by MBO Partners, was the first generation to fully embrace the gig economy, meaning that instead of working a regular full-time job, they hustle to make a living as freelancers. According to an Intuit study, 40 percent of U.S. workers will be freelancers by 2020. And from both a health care standpoint and a retirement standpoint, the gig economy presents some major challenges in part because freelancers have to buy their own health insurance. For Gen-X freelancers, it is vitally important that health care reform go forward; although the ACA doesn’t go far enough and is too expensive for many, it is preferable to the Republican plan (which would leave millions of Americans uninsured).

According to a new report by Willis Towers Watson, 23 percent of Americans expect to be working beyond age 70. But when age discrimination rears its ugly head, job hunting won’t be easy. At a time when union membership is suffering record lows and millions of U.S. jobs have been outsourced to poor developing countries, corporations know they can get away with all kinds of abuse, including age discrimination. Seniority used to be a plus at large companies; now, companies often embrace change for the sake of change, making workers over 40 the first ones fired and last ones hired. In 2012, 22,857 Americans filed age discrimination complaints with the Equal Employment Opportunity Commission compared to 16,548 in 2006.

Social Security, enacted as part of FDR’s New Deal in 1935, has served the U.S. well for 81 years. But Gen-X is facing some Social Security challenges. First, Gen-Xers who are underemployed or underpaid are paying less into the program than they would be in a healthier economy. Second, Republicans have been relentless in their attacks on Social Security, continuing to push for Social Security cuts and raising the retirement age, which Gen-X would bear the brunt of. Recent polls have been showing an advantage for Hillary Clinton in a Clinton/Trump race, and Clinton has stood firm in her opposition to Social Security cuts. But as long as there are large numbers of far-right Republicans in Congress, Gen-X voters will have to remain vigilant when it comes to protecting Social Security.

In 1965, Medicare became the crowning achievement of President Lyndon B. Johnson’s Great Society. The government-operated program, which guarantees universal health care for Americans who are 65 or older, has been incredibly popular. But that hasn’t prevented Republicans from calling for its privatization—including House Speaker Paul Ryan, who has advocated gradually replacing traditional Medicare with a voucher program. Just as Gen-X would bear the brunt of gradual privatization of Social Security, they would bear the brunt of traditional Medicare being phased out over time. Nonetheless, the privatization of Medicare for Gen-X is not a done deal, and between now and 2030, Gen-Xers have the option of voting Medicare’s enemies out of office.

During the 2016 Democratic presidential primary, Bernie Sanders and former secretary of state Hillary Clinton had a constructive debate on health care reform. Sanders favors universal health care via a single payer system, while Clinton believes that goal can be achieved by expanding the Affordable Care Act of 2010, aka Obamacare. The Republican presidential candidates, however, had nothing constructive to say on the subject; their only idea was to overturn the ACA, rendering millions of Americans uninsured. For many Gen-Xers who are now in their 40s or early 50s and have developed preexisting conditions, that would be a disaster. For aging Gen-Xers, the road to universal health care moves much too slowly under Democrats—and under Republicans, it doesn’t exist at all.