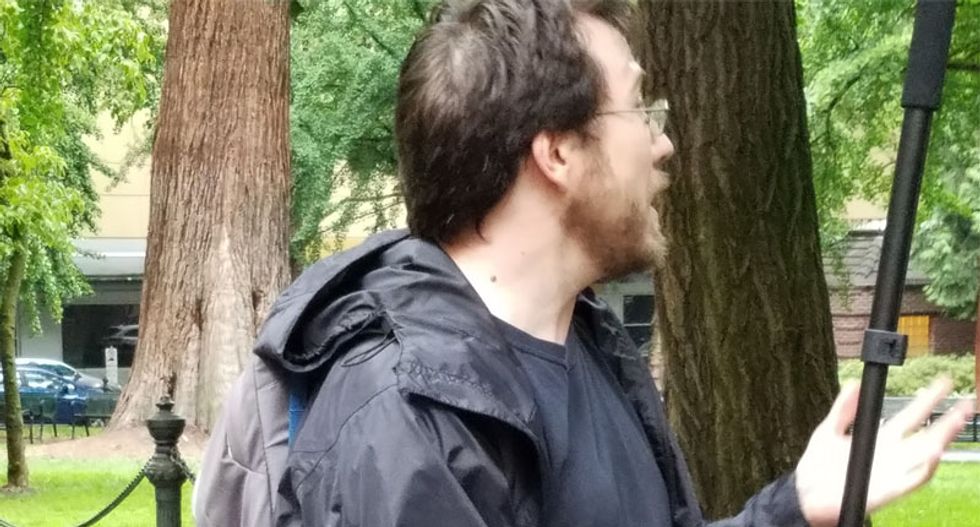 Shouts and yells erupted on the fringe of the Black Lives Matter rally in downtown Portland.

A local right-wing agitator, Michael Strickland, was backing down the street away from a few dozen people, including masked anarchists clad in black. (Strickland participated in the Portland State University Students for Trump rally covered by The Raw Story last month.)

Strickland held a tripod-mounted video camera in his left hand. His right hand grabbed near his waistband.

Seconds later, facing the crowd, he pulled a Glock 27 from a holster on his right side. Assuming a wide stance and grasping the gun with both hands, he swung it from side to side, bellowing, “Back off!”

Several people screamed, “Hit the ground!” and dropped or dove behind cars, even as more than a thousand other protesters were unaware of what was happening and continued with the rally against police killings.

But a few protesters continued to walk calmly toward Strickland. Ben Kerensa, 32, was among those who confronted Strickland initially. “We just wanted him to leave.” Strickland is involved with a YouTube channel, Laughing at Liberals, which shows up at leftist protests to film people and put them online. 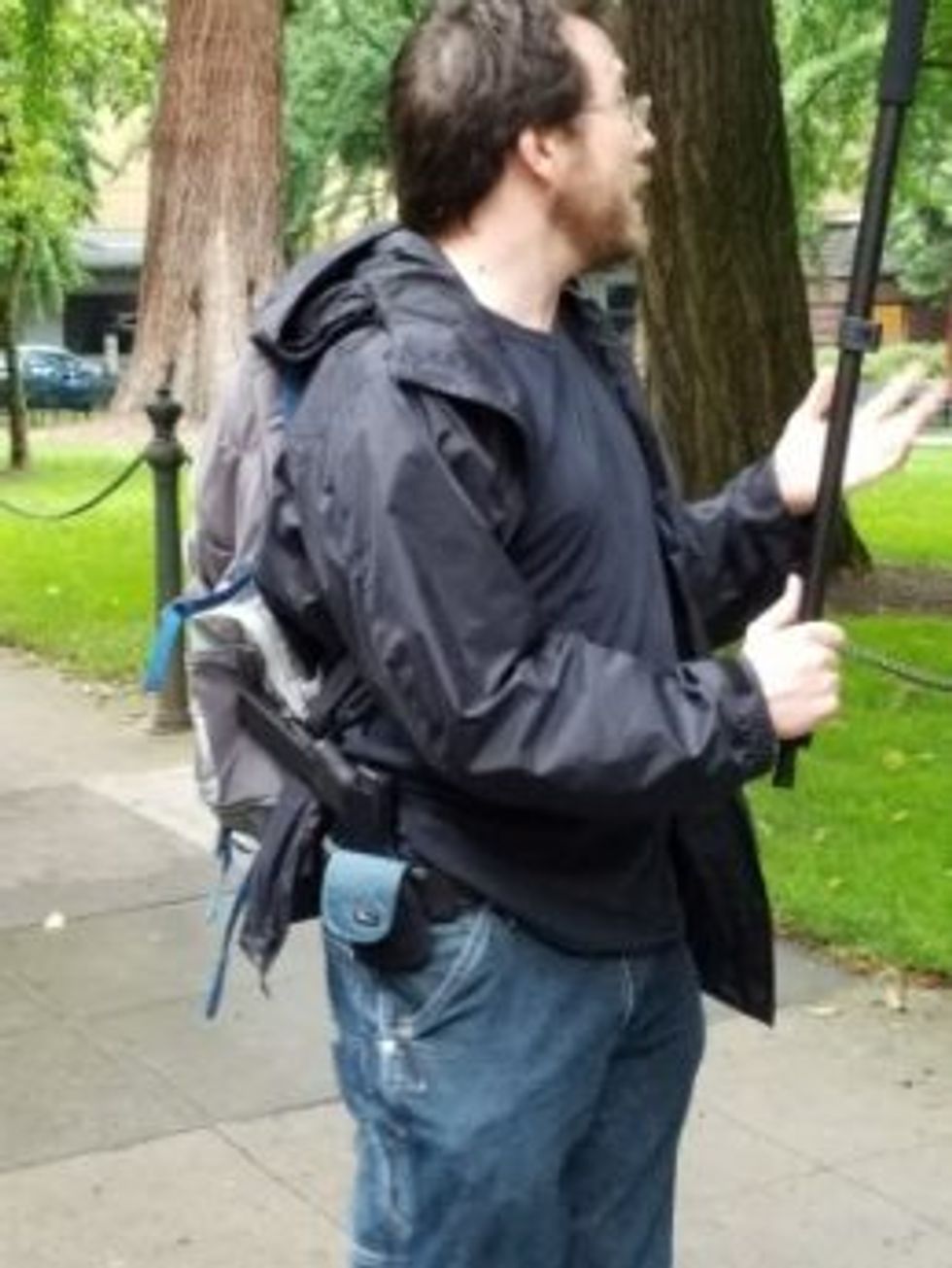 Kerensa claims, “Strickland takes pictures of women and minorities, puts them online with their names and addresses. He stalks them and harasses them.”

Kerensa said before anyone reached him, Strickland put his hand on his gun, which had been hidden under a rain jacket.

“He swept the crowd a few times with the gun,” said Kerensa. “I saw him take out the regular clip and slot in an extra-capacity magazine. I saw him chamber a round.”

For a moment, it seemed he might open fire as protesters scrambled away and two journalists sprinted toward him.

Strickland alleges he was shoved before he reached for his gun and repeatedly stated, “I feared for my life, that’s why I pulled out my gun.” Kerensa disputed that, claiming no one touched him before, and that he was only lightly pushed away after he grabbed the gun.

When reporters caught up with Strickland, he appeared panicked. The gun was still visible, and at least five rows of bullets could be counted in the magazine sticking out of the gun’s handle in the magazine. Strickland said they were 9mm bullets.

Only a few protesters remained, with some trying to calm him down and offering to take him out for a coffee.

As he retreated from the Black Lives Matter rally, he kept claiming to fear for his life and said he was justified in pulling his gun and threatening to shoot the crowd of unarmed protesters. Asked why he brought a gun to the rally in the first place, Strickland said he had been threatened on social media.

The whole time there was not a police officer in sight, even though the rally was on the steps of the Multnomah County Justice Center where the county sheriff and jail are both located.

Just as the whole incident appeared over, two trucks came screeching up to Strickland and more than a dozen cops wearing full body armor, balaclavas, and riot gear came pouring out. Strickland was ordered to lie on the ground spread-eagled as cops ran up with guns pointed.

Strickland and another man, who gave his name as Jessie, were both arrested and hauled away.

On a night where halfway across the country gunfire erupted at the Black Lives Matter rally in Dallas with deadly and devastating consequences, it appears Portland was spared tragedy only by chance.

A rift between conservative American bishops and the Vatican could be laid bare on June 16 as the U.S. Conference of Catholic Bishops meets amid talk of a growing divide in the church over Pope Francis' leadership.

During the virtual event, U.S. bishops are expected to approve a motion to begin drafting a document on “Eucharistic coherence" that would exclude Catholic political figures who support abortion rights from receiving Communion.

Before Donald Trump's presidency, conspiracy theorist Alex Jones' Infowars was considered a fringe outlet in right-wing media circles; even former Fox News pundit Bill O'Reilly dismissed Jones as a buffoon. But the Trump White House treated Infowars like a serious news organization, and according to Free Speech TV, Jones "is now claiming that he coordinated with the Trump White House on the events of January 6."

Free Speech TV, in a page for David Pakman's show, explains, "The Infowars host made the claim last week that he even put up $500,000 of his own money to make it happen. Jones said, 'The White House told me three days before: We're going to have you lead the march.' He went on to say that 30 minutes before the end of Trump's speech at the Rotunda, the Secret Service planned to take Jones out of the crowd to the spot where the march was supposed to begin. He went on to say, 'Trump will tell people: Go, and I'm going to meet you at the Capitol.' Jones' statements are basically a full-on admission about his involvement in the riots, although he can always hide behind saying he did not intend for the rally to get violent."