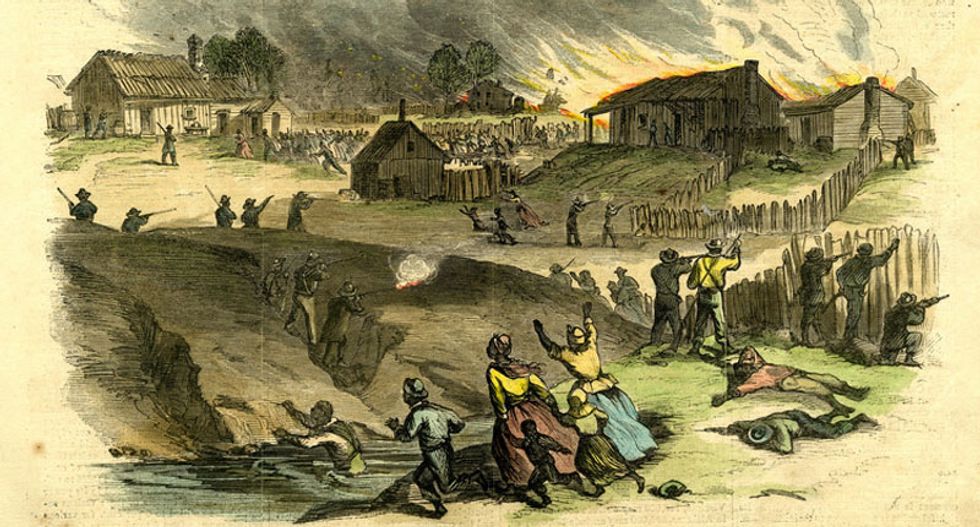 In 2008, the United States elected its first African-American president. But in the last year of Obama’s final term, the paradox and tragedy of race is as apparent now as any time in recent American history. A poll released earlier this month indicates a growing pessimism about race relations in the U.S., an attitude triggered by the deaths of black people at the hands of law enforcement officers and subsequent attacks on police in Baton Rouge and Dallas.

As the nation seeks to understand the recent violence, and as the Black Lives Matter Movement claims the mantle of black leadership, now is an important time to remember an earlier period of race-based violence and civil rights struggles.

In late 1865, a U.S. military official filed a report that made it into the hands of congressional leadership. The report highlighted how the state of Mississippi had enacted laws limiting the rights of freedmen and women. In the report, submitted on Nov. 28, Lieutenant Eldridge wrote that a Mississippi law barred African-Americans from leasing land, “testifying in cases of whites,” “doing any independent business” and appealing court cases past the county level.

The Mississippi law did give African-Americans the right to marry, to sue and to own property. But the ultimate goal of the state’s “Black Codes” and those passed in other states like Alabama and South Carolina was to limit the movement and gain control over the labor of freedmen and women. In the state of Mississippi and in other southern states, black and white people were to live under different laws.

With the failure of white Southerners to recognize African-Americans as citizens, Senator Lyman Trumbull of Illinois led a congressional response and wrote the Civil Rights Bill. It passed Congress but was vetoed by President Andrew Johnson. Congress mustered the votes to override the veto and passed the bill into law in April of 1866. Its principal objective was to make explicit the citizenship rights of African-Americans, and in effect prevent racial discrimination. More specifically, the law guaranteed black people protection by the government.

In a message delivered on April 4, 1866, Trumbull responded to President Johnson’s veto message. Drawing on the ideas of political theorists and the opinion of military officials, Trumbull argued that the federal government was responsible for providing protection to all citizens regardless of race. The law, Trumbull argued, would make binding policies that had already been undertaken by the military in the post-Civil War South.

The United States military had filled the vacuum created by the collapse of the Confederacy. One of their roles was to administer justice and adjudicate disputes. Within this context, Major General Sickles, based in South Carolina, ordered in late 1865 to early 1866 that the government’s role was to “secure the same equal justice and personal liberty to the freedmen as to other inhabitants.”

Black grassroots politics and the contest for equal rights

Leading up to the civil rights debate at the federal level, African-Americans in the North and South organized grassroots movements to secure their rights as citizens.

For example, the Pennsylvania Equal Rights League emerged in the wake of the Civil War. Led by William Forten, Octavio Catto and other prominent black Philadelphians, they pressed the state legislature for black male voting rights and an end to segregation on Philadelphia’s streetcar lines.

African-Americans in the South held political conventions to define their new roles in the U.S. as citizens. Freedmen held a convention in Augusta, Georgia, in January of 1866 to define what they meant by citizenship rights. They resolved they had the right to protection, to land, to serve on juries, to individual and collective property ownership, to pensions for military service and to universal male suffrage. This meeting also launched the Georgia Equal Rights Association to realize this vision.

Yet, the Civil War had not fully come to an end. Violence broke out in the streets of New Orleans and Memphis. As African-Americans flocked to Memphis looking for a refuge from rural poverty and exercising their new rights to move about freely, the white press of Memphis reacted by painting blacks as “lawless.”

The “Massacre in Memphis” erupted on May 1, 1866, leaving nearly 50 black people dead and another 70 to 80 wounded. White rioters went after black women in particular, perpetrating rape as a form of terror. On July 30, mob violence led by Confederate veterans and the police in New Orleans left over 40 African-Americans dead. The 1866 massacres and Johnson’s earlier veto of the Civil Rights Bill pushed Congress to pass the 14th Amendment and send it to the states for ratification.

The process was not without its imperfections. Men and women, blacks and whites had joined common cause before the Civil War to promote women’s rights and an end to slavery. But throughout the push for civil rights in 1866, rhetoric used by politicians, military officials and equal rights organizations called for the rights of “men.” This would ultimately translate into a focus on black male suffrage, which was embedded in the 14th Amendment. The specific rights of women were put on hold.

As a result of this compromise, fissures grew in the interracial coalition of men and women who had fought for equal rights before the war. The unraveling of this coalition was emblematic of a larger process.

Soon after, in the face of corruption scandals and an economic crisis, the federal government lost its will to defend African-Americans and failed to protect their civil rights. Through a long, complicated and contested process, white vigilante groups, local and state governments, and even the Supreme Court rolled back the political gains of the 1860s.

The political struggles of 1866, the ratification of the 14th Amendment and the aftermath demonstrate the intertwined nature of grassroots and national politics. It also shows how fragile political coalitions can be. Ultimately, it reveals that political progress is neither linear nor inevitable – that forces of reaction, regression and retrenchment meet every forward movement.