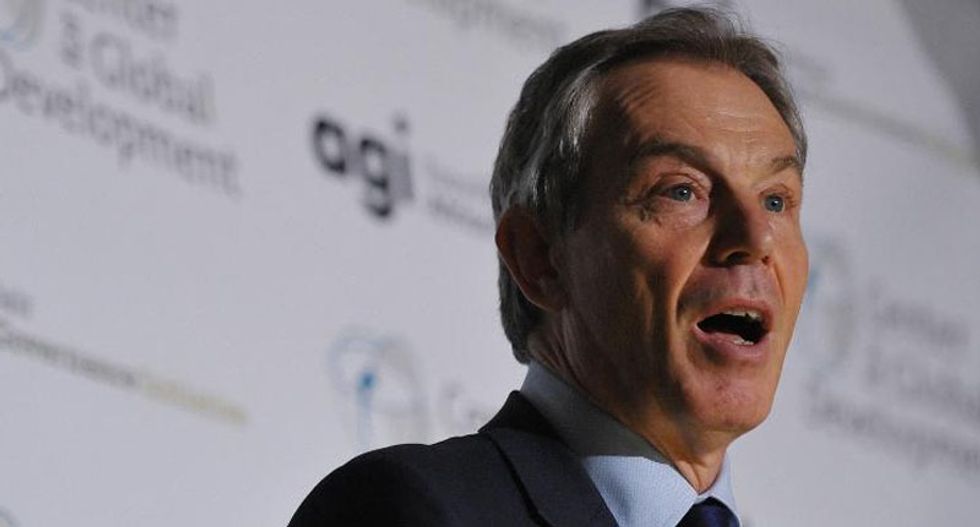 When the Iraq inquiry’s findings are published on July 6, we should resist what’s become the easy refrain: “Blair Lied. Thousands Died.”

If we actually want to learn from what happened, we should recognise that Tony Blair has been remarkably consistent in his view that the removal of the regime was necessary, whether or not Saddam Hussein actually possessed weapons of mass destruction (WMD). Blair, it seems, genuinely believes that the war was in our best interests because it may have prevented an unlikely (but not impossible) catastrophe. This way of thinking has not gone away.

Ever since the inquiry began in 2009, Sir John Chilcot has said: “The inquiry is not a court of law and nobody is on trial.” This provoked plenty of consternation, despite Sir John’s promise that the committee will “not shy away” from frank criticism.

One of the questions that we can expect the inquiry to resolve is whether the public was deceived about the factual basis for war. Were lies told? Was there an environment in Number 10 whereby public deception was seen as a necessary evil?

Important as these concerns are (and Piers Robinson has written about these questions here), they are secondary to another mystery: why did Blair sincerely believe that war was necessary in the first place, and that it was necessary to persuade a requisite amount of parliamentarians and the public to support intervention?

The story of Britain’s decision to go to war is about not just bad apples, but bad barrels. In other words, to understand what happened in 2002-3, we need to focus not just on what people did, but also why they did it.

The politics of catastrophe

Way back in April 1999, Blair gave a speech in Chicago called The Doctrine of the International Community, in which he set out five conditions under which it would be legitimate to intervene militarily.

The first condition for intervention would be: “Are we sure of our case?” Are we sure, in other words, that intervention will ultimately do more good than harm? War kills innocent people, and it is only the least-worst option when it saves more lives than it destroys.

That speech was given in the context of the Kosovo conflict, but the ideas also underpinned Blair’s rationalisation of the Iraq war. As the scholar Jason Ralph has argued, Blair sincerely believes that the war, which was presented as an act of collective security, was a continuation of the internationalist doctrine he laid out.

So did the Iraq War meet the conditions that Blair himself set out in 1999 – and specifically, was there a good reason to think that war would do more good than harm? 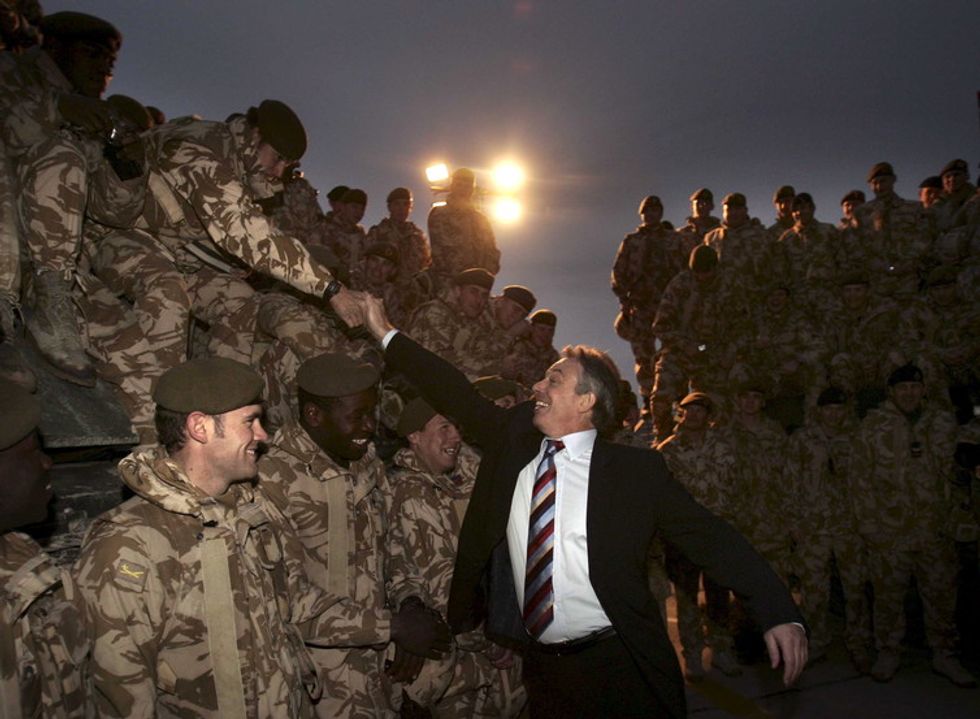 A true believer in Basra.

Blair certainly seems to think so. And to understand why, we only need to look at what he said to the inquiry in 2010.

The crucial thing after September 11 is that the calculus of risk changed … it is absolutely essential to realise this: if September 11 hadn’t happened, our assessment of the risk of allowing Saddam any possibility of him reconstituting his programmes would not have been the same … The point about [9/11] was that over 3,000 people had been killed on the streets of New York, an absolutely horrific event, but this is what really changed my perception of risk, the calculus of risk for me: if those people, inspired by this religious fanaticism could have killed 30,000, they would have.

This is what some call the politics of catastrophe, a concern with the unknown and unanticipated. We now think about the future as a place where it is more certain that terrible things will happen, but we are uncertain about exactly what will happen, when it will happen and where.

Blair’s belief in the need and urgency for war was underpinned by three assumptions: that Iraq was at least capable of, and interested in, producing WMD; that Iraq was obstructing and deceiving the existing inspections and sanctions regime; and that if Iraq did produce WMD, these weapons could be acquired by terrorist organisations, who could use them to mount devastating attacks.

Blair’s assumptions effectively short-circuited the calculus of benefit versus harm. The number of soldiers and civilians who may lose their lives in a war can, plausibly, be calculated. But, for Blair, the number of lives that could be lost in a single terrorist attack was incalculable. While a future terrorist attack using WMD was unlikely, it could kill an unprecedented number of people.

How to think about security

It is because of this kind of thinking that Blair still believes that going to war was the right thing to do. As he said when giving evidence in 2010:

It’s a decision. And the decision I had to take was, given Saddam’s history, given his use of chemical weapons, given the over one million people whose deaths he had caused, given 10 years of breaking UN resolutions, could we take the risk of this man reconstituting his weapons programmes or is that a risk that it would be irresponsible to take? The reason why it is so important … is because, today, we are going to be faced with exactly the same types of decisions.

Here Blair is quite right: we are facing the same decisions today. Should drones kill suspected terrorists pre-emptively because of what they may do in the future? Should we surveil individuals that exhibit radical views for the same reason?

This worldview transcends the intentions of individual decision-makers and the machinations of “bad apples”. It has become endemic in Western governments and societies; it persists on an unconscious level, and it cannot be pinned on “Teflon Tony” alone.

To grapple with it, we need to have a serious discussion about the meaning and value of security, and how we weigh the costs of war (let’s remember that there have been as many as 250,000 violent deaths since the invasion). We need a clear way of deciding what constitutes an urgent threat, and what constitutes an appropriate response. 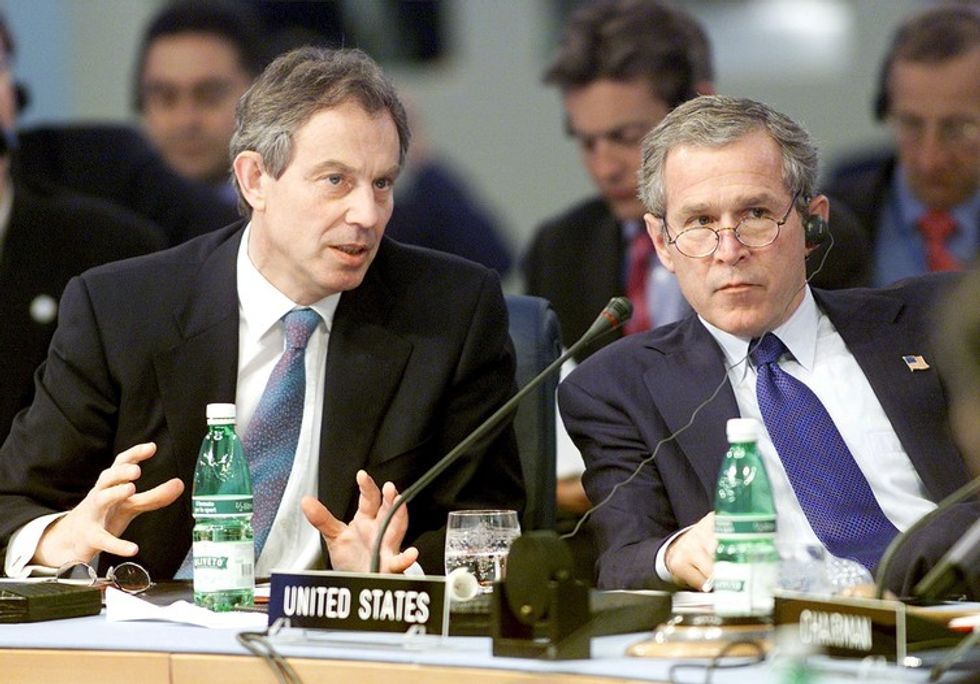 At least one member of the Chilcot committee will know all about Blair’s “Doctrine of the International Community”. On April 16 1999, now-Chilcot committee member Sir Lawrence Freedman sent a fax to Number 10 with some ideas for the Chicago speech – and it was he who suggested the five conditions.

Freedman recently published an essay titled with a very pertinent question: Can there be a liberal military strategy? The final lines may be telling. Freedman argues that:

It is best to acknowledge that force invariably carries … risks and that they cannot necessarily be avoided … at the very least it requires paying much more attention to the interaction between the military and political strands of strategy when deciding upon the use of military force and explaining its purpose to the public.

Perhaps this is the one of the most valuable lessons we can learn. Whether or not Blair and other senior figures within government actually misled the British public, and whether they did so deliberately or not, they genuinely believed in the need for action based on a particular political strategy of security. That strategy is what we now need to evaluate.