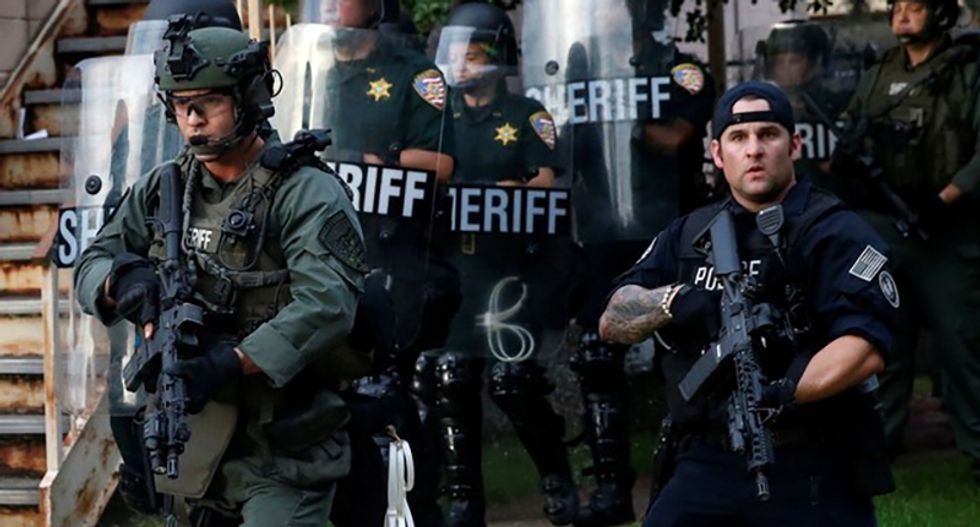 Nekima Levy-Pounds, president of the Minneapolis chapter of the National Association for the Advancement of Colored People, compares the city's mostly white police department to "an occupying force" when its officers go into black neighborhoods.

In Baton Rouge, minorities are "very wary of police and often afraid of them," says Michele Fournet, a veteran criminal defense lawyer there.

Long before they were rocked this month by local police killings of black men, the two U.S. cities were grappling with similar problems - police forces viewed by many as overly aggressive and unrepresentative of black communities.

Activists and residents in both places have urged law enforcement to spend more time in neighborhoods building relationships and trust as part of "community policing" efforts. Many would also like the cities to hire more black officers.

Such calls having been growing across the country since the fatal police shooting of Michael Brown, a black teenager, by a white officer in Ferguson, Mo., in 2014. Since then, a wave of anti-police protests has spread across the country fueled by high-profile police killings of other black men, including Baltimore police detainee Freddie Gray last year.

Police spokesmen from Baton Rouge and Minneapolis, in statements, said their departments had each made significant strides toward diversity in their forces.

The Minneapolis Police Department said it has been "a national leader and has set national 'best practice' standards in community engagement and community policing."

Officials from St. Anthony, Minn., which provides police service to Falcon Heights and employs the officer who shot Castile, did not respond to questions.

Alton Sterling, the Baton Rouge man who was shot by police on July 5, had peddled CDs for years and law enforcement officers would have known he was not a threat if they were more familiar with the area, local residents said.

One officer is notorious for harassing local black residents, to the point where he has been given a street nickname of “Bro Stupid,” said Burnell Williams, who works with at-risk youth and ex-prisoners for the nonprofit group Against All Odds.

Blacks made up about 55 percent of Baton Rouge’s population in 2010, but only 30 percent of the police force in 2013, according to U.S. government data.

Similar disparities affect Minneapolis, near the tiny city of Falcon Heights where Philando Castile was killed by a police officer during a traffic stop on July 6.

Blacks in Minneapolis were 8.7 times more likely than whites to be arrested for low-level offenses, such as trespassing and disorderly conduct, according to a study of arrests from 2012 to 2014 that the American Civil Liberties Union of Minnesota published last year.

Blacks accounted for about 19 percent of Minneapolis' population in 2010 but just about 9 percent of the city's police officers in 2013, according to U.S. data.

Black residents of Minneapolis and nearby towns said the lack of a requirement for police to live in the jurisdictions they patrol has kept officers disconnected from neighborhoods. Some U.S. cities have instituted residency requirements for police.

"You have mostly white officers patrolling a poor black neighborhood where they have no real nexus to the community, where there are high rates of complaints against the use of excessive force by police and the over-criminalization of the African American community," Levy-Pounds said.

Bob Kroll, president of the city's police union, said the department needs to increase its numbers by about 20 percent. Without more officers, "you're just going call to call to call, 9-1-1," he said.

Ronald Edwards, a black civil rights activist in Minneapolis who contacted Reuters at the request of the police department, said he believed the city's police chief was doing her best to improve race relations.

However, he said "you don't have enough officers to deploy them and do the things that really begin to break down the barriers between people of different colors."

In Dallas, where five police officers were murdered in the wake of the shootings in Minnesota and Louisiana, police Chief David Brown told reporters on July 11 that community policing was the best way to deter crime and protect officers.

Brown, a 33-year department veteran, noted that 2015 was the 12th year of crime reduction in Dallas, more than any other major American city.

Police "have done this by also protecting the civil rights of our citizens," Brown said of the decline.