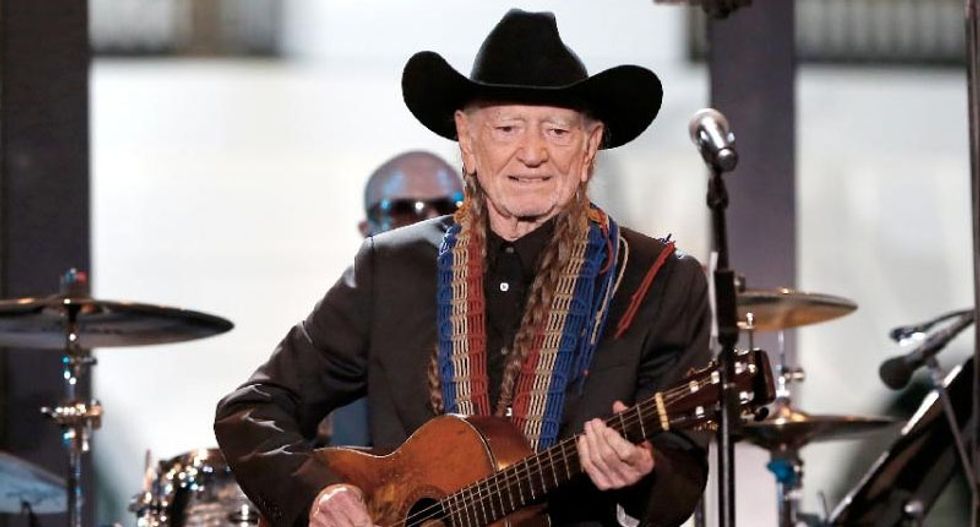 Now 82, Willie Nelson looks back at his life from a hardscrabble childhood in tiny Abbott, Texas, during the Great Depression to his triumphs as one of country music's original crossover successes (AFP Photo/Yuri Gripas)

t is an on again, occasionally off again American tradition from the 1970s that has filled football stadiums and sun-baked Texas ranches, with one constant - country music legend Willie Nelson celebrating Independence Day with a music-packed picnic.

Nelson’s first blowout picnic in 1973 was a combination of Woodstock hippy love and cowboy hoedown of more than 40,000 people in Dripping Springs outside of Austin that raised the ire of police, who received complaints about noise, nudity and dazed people wandering around.

As Nelson has aged, the event has mellowed. About 10,000 people are expected at this year’s version, which will feature 20 acts, including some Texas troubadours who appeared at the first picnic, and will be held at a race track in Austin, which is the only U.S. stop for global Formula One racing.

Nelson said he got the idea for the picnics from the 1969 Woodstock music festival and wanted to bring that feeling to the Hill Country west of Austin.

"I was looking at (Woodstock) and was realizing the same thing might happen in Texas if it were promoted right and had the right talent," Nelson said in an interview with Reuters.

"It is a national holiday for national independence and I felt like a lot of people would like to get together and celebrate. It was a no-brainer,” said Nelson, 83.

The early affairs were raucous events, drawing crowds of over 80,000. They often lasted for days, often at places not prepared for the onslaught.

“If we had arrested all the naked and drunk people I saw, we’d have filled our jail and yours and all of the jails from here to Dallas," a deputy in Williamson County, north of Austin, told the Austin American-Statesman after the 1975 event, which attracted about 70,000.

The 1976 picnic in Gonzales, Texas, was marred by reports of rapes, stabbings, rampant drug use and snake bites.

After a raft of troubles, Nelson moved the picnic in 1979 to his country club in the Texas Hill Country, much to the annoyance of his neighbors, who complained of the noise and clogged roads.

He has since taken the show on the road with stops in New York and Atlanta, as well as a truck stop town between Dallas and Austin. The picnic moved to the Circuit of the Americas race track in Austin last year.

The facility, with ice-cooled "water monster" hydrating stations, covered mist rooms, about two dozen restaurant and bar choices, and a bevy of functioning toilets is a far cry from the early days where the nearest shrub was often the closest thing to a rest room.

The acts this year include some who have been picnic staples, including long-time country music notables Ray Wylie Hubbard, Johnny Bush and Billy Joe Shaver. Some of the newer stars to take the stage include Margo Price and Shakey Graves.

Nelson, with a six-decade career capped by numerous awards, including the Library of Congress Gershwin Prize for Popular Song in 2015, remembers the Fourth of July as a much simpler affair when he was growing up in rural Texas.

"I would just hang out and do nothing. That is still my favorite thing to do."