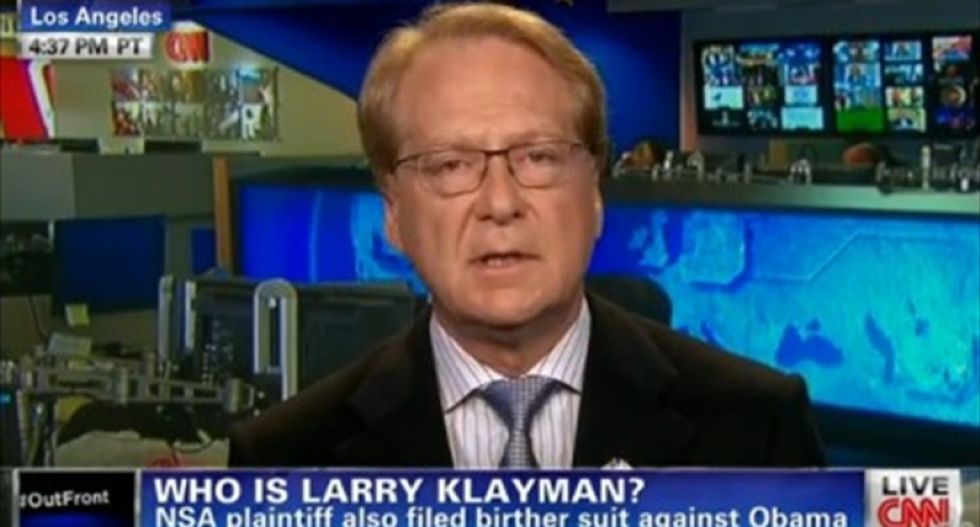 Tea Party legal activist Larry Klayman tried to link President Barack Obama to Nation of Islam leader Louis Farrakhan in a lawsuit blaming both of them, among others, for the fatal shooting ambush in Dallas last week.

Right Wing Watch reported that Klayman, a former prosecutor who has previously blamed Obama when he was trounced in a CNN interview, said in the suit that the president was "endangering not just [his] life, as a white law enforcement person of Jewish origin, but also for all Americans, white, black, yellow or brown, no matter what their race or religion."

The lawsuit, filed in Dallas, also says that Obama is "soul brothers" with both Farrakhan and former MSNBC host Al Sharpton.

"When the leader of the United States and supposedly the Western world, who was born to a Muslim father, schooled in Muslim schools, and has close ties to black-Muslim leaders like Farrakhan seeks to incite violence by virtue of his running interference for Muslims and blacks who are not even representative of African-Americans generally, it's no wonder Obama-inspired massacres like Dallas happen," it states.

Klayman, who is currently representing Maricopa County Sheriff Joe Arpaio in court over Arpaio's policies targeting Latinos, argued in his suit that the "race war" Obama has been fomenting is also to blame for the fatal police shootings last week of Philando Castile and Alton Sterling, which spurred the demonstration in Dallas that was marred by the attack that left five officers dead.

"It is no wonder some cops, fearing for their lives in this anti-white, anti-Semitic and anti-Christian environment, sometimes are prone to literally pull the trigger too quickly," he wrote.