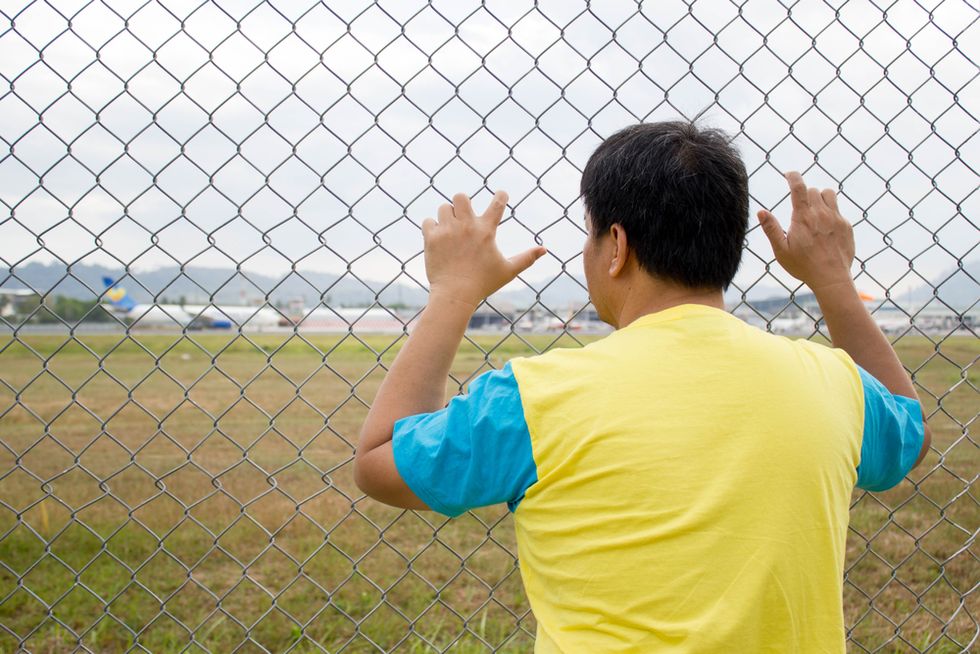 Image: Man looks out through a chain link fence (Shutterstock.com)

A lawsuit filed by a group of Native American plaintiffs in Wolf Point, Montana alleges that city officials and highly placed tribal elders conspired together to sweep the town's streets of Native Americans ahead of an annual rodeo.

The Daily Beast reported Thursday on the suit, filed in the Great Falls division of the U.S. District Court for Montana, which says that Native American homeless people and vagabonds were rounded up in a wave of spurious arrests and held in an open-air detention area to make the town appear "whiter" to tourists.

Each year, Wolf Point hosts the Wild Horse Stampede, the largest and oldest rodeo in the state. Thousands of rodeo enthusiasts flock to the sleepy town of 3,000, where the population in normal times is about 40 percent white and 50 percent Native American.

The plaintiffs in the civil suit -- including members of the Assiniboine and Sioux tribes -- allege that they were targeted as undesirables in the arrest raids, which police called the "Wino Roundup." They say their rights to due process, Miranda rights and other liberties were abridged. The authorities, they say, often refer to impoverished locals as “Homeless, Winos, Street People, Tree People, Drug Addicts, Alcoholics, or Prairie Niggers.”

The annual rodeo is "largely a white Anglo-Saxon event," the suit says, and in order to present a sanitized version of life in Wolf Point to visitors, city officials launched the "Wino Roundup" on July 12, 2013.

Police -- some of whom reportedly wore strips of masking tape over their name tags to hide their identities -- “removed 30 to 50 individuals to curb the American Indian presence."

The Daily Beast's Kelly Weill noted that city records do not list the arrests and that the plaintiffs were "never served official charges, never read their Miranda Rights, and never allowed to meet with lawyers. Instead, they describe a period of unlawful detainment, during which they were denied basic legal aid or health facilities while the Wild Horse Stampede festivities kicked off."

The detainees were packed into squad cars and vans, one of which was reportedly so airless and tightly jammed with bodies that at least one arrested person lost consciousness during the 30-minute trip to the jail in nearby Poplar.

“We couldn’t breathe, and we could barely move around,” said 55-year-old Reba Demarrias to the Great Falls Tribune. “There wasn’t no kind of windows or anything. I didn’t know where we were going or where they were taking us. No one would talk to us. I sat there with my head between my legs trying to get air, because were so stuffed in there.”

When all of Poplar's jail cells were full, detainees were separated by gender and housed outdoors on a pair of fenced-in basketball courts with no toilets, no first aid or medical assistance, and no protection from the elements.

“Women were provided a blanket and a pot in which to relieve themselves,” the suit said. “Men were instructed to urinate through the fence. Some of the male plaintiffs will testify that they were unable to get near the fence and so were forced to ‘piss or shit their pants.’”

“Everybody was screaming and crying,” Demarrias told the Tribune. “After a while they came in with two or three trays of goulash. There wasn’t very many. The older ones just gave the food to all the young ones and kind of sheltered them there – trying to calm them down.”

The first day, the detainees sweltered in the July heat. That night, they were doused by a sudden downpour. Police and jail officials attempted in vain to stretch tarpaulins over the basketball courts, but then gave up and moved all of the detainees to "even tighter confinement within a windowless garage.”

The next day, they were released in waves, but the lawsuit says that some of the detainees have died in the years since their confinement -- “their deaths accelerated or caused by the physical stresses experienced during the incarcerations."

City officials deny that there was any concerted attempt to target the Native American population, but the Tribune published a partially redacted report from the department's internal investigation.

According to the Tribune, "The case has been referred to U.S. District Court Judge Brian Morris."