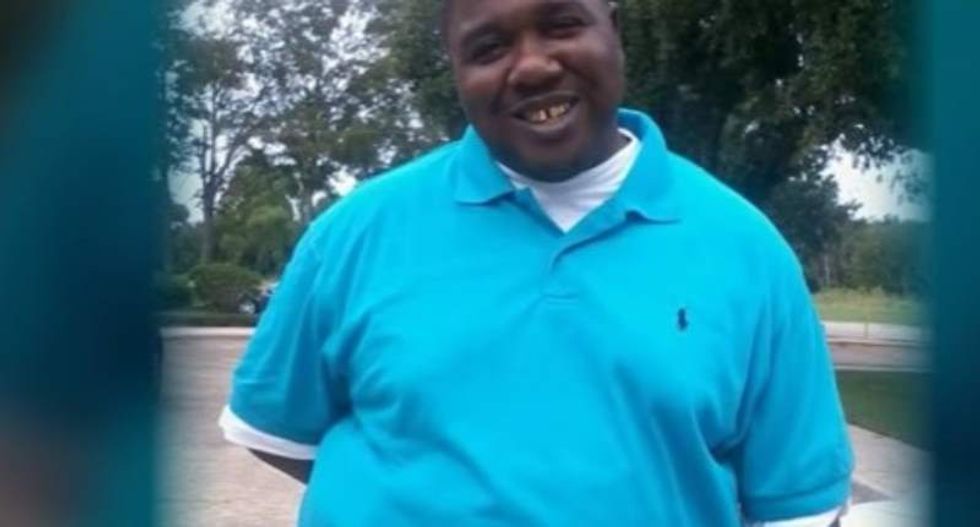 Mourners gathered in Louisiana's state capital on Friday to remember a black man who was fatally shot by Baton Rouge officers last week in one of two deadly encounters that led to protests over police violence against African-Americans.

As heavy rain fell outside, a steady stream of people filed into an activity center at Southern University to view the body of 37-year-old Alton Sterling, whose open casket was surrounded by flowers and photographs.

The visitation, attended by civil rights leader Rev. Jesse Jackson and U.S. Rep. Cedric Richmond of Louisiana, was held at the center to accommodate the large crowd that turned out to pay their respects to the father of five known as "Big Alton."

He was shot by police at a close quarters on July 5 as he sold CDs outside a convenience store in an incident that was recorded on a cellphone.

Among the mourners was Minerva Dunn, who serves in the U.S. Army and worships at the same church as Sterling's aunt, who raised him after his parents passed away.

“I am ripped apart by this,” Dunn said. “My husband is a police officer, I’m a soldier, and I have two black sons,” she said. “I am so disheartened, and my hurt comes from different places.”

Sterling's death, and the fatal shooting of a young black man in Minnesota by a police officer, renewed outrage against law enforcement's treatment of minorities and also rekindled a national debate on race relations that began after police-involved killings two years ago.

Then in Dallas last Thursday, one of the protests ended with the killing of five policemen in a racially motivated attack by a black U.S. military veteran who opened fire on white officers. The rampage highlighted the dangers routinely faced by law enforcement and amplified a dimension of the racially tinged violence that shocked many Americans.

Carl Slaughter, a Baton Rouge resident who has run a community center for 35 years, remembered Sterling as a teenager who spent many hours there after the death of his parents.

“He was a good kid, always good natured, and everybody has good memories of him,” Slaughter said.

He said he sympathized with police but even so, he thinks Sterling’s killing was unjust, based on video footage of the incident he watched on television.

Sterling was shot and killed in the store's parking lot during an altercation with two white officers responding to a 911 call about a man threatening someone with a gun. The incident was recorded by the shop owner.

According to an affidavit, the officers tried to restrain Sterling and deployed Tasers. But they used deadly force after Sterling reached for a gun in his pants pocket, it said.

Congressman Richmond, a Democrat whose district stretches from Baton Rouge to New Orleans, told mourners: "This fight for social justice and police reform will require us to agitate, legislate and litigate." He decried what he called a mindset of "shoot first and ask questions later."

The U.S. Justice Department has opened a civil rights investigation into the shooting.