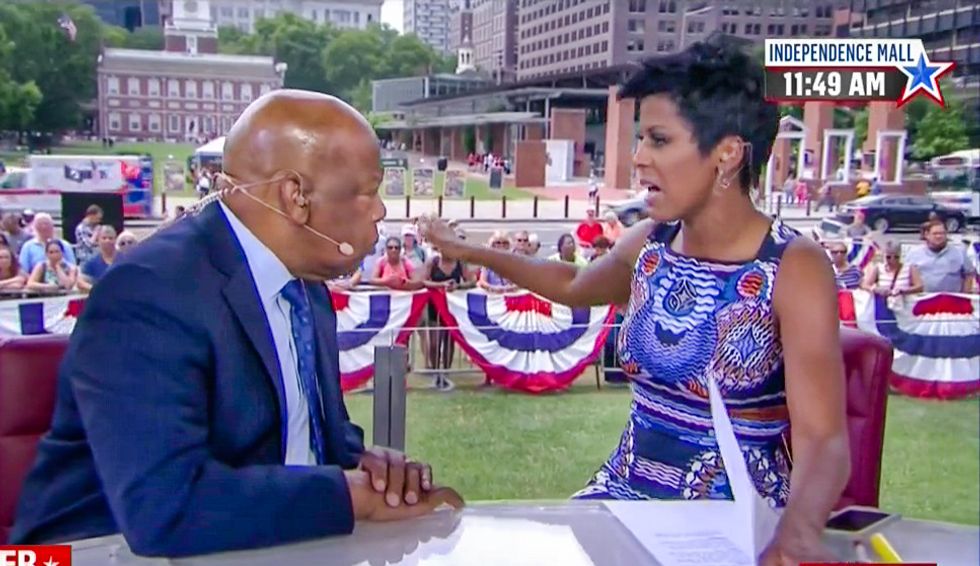 Protesters at the Democratic National Convention in Philadelphia shouted down civil rights icon John Lewis while he was being interviewed by MSNBC's Tamron Hall on Thursday.

"We have elected a person of color for two terms," Lewis said. "He broke barriers. President Barack Obama did it in his way. And tonight, this night, we're going to nominate a woman."

"She sucks!" a protester yelled, followed by chants of "She stole it!"

Fighting to speak over the demonstrators, Lewis continued: "I'm convinced she will be elected the next president of the United States."

"We're making progress tonight," he added. "Her nomination is going to inspire young women, young girls, young men all over America and all over the world."

"I can't ignore there are a couple of people in our audience that have yelled things," Hall said, pointing to the crowd. "Some of them have been ugly and vitriolic, others have been their beliefs in democracy and that Bernie Sanders does not get the shake that they believe that he deserves."

"You were beaten within an inch of your life," she observed. "You've seen democracy or the battle for civil rights at its ugliest. How do you communicate to those who choose to speak civilly and not violently toward you here that there's something greater at risk here if Donald Trump becomes the president in your eyes?"

"I think it's so important that we recognize the fact that we win some and sometimes we lose some," Lewis replied. "But we never give up, we never become bitter or hostile. I was beaten, bloodied, left unconscious fighting for the right to vote."

"But I never became bitter, I never lost hope."