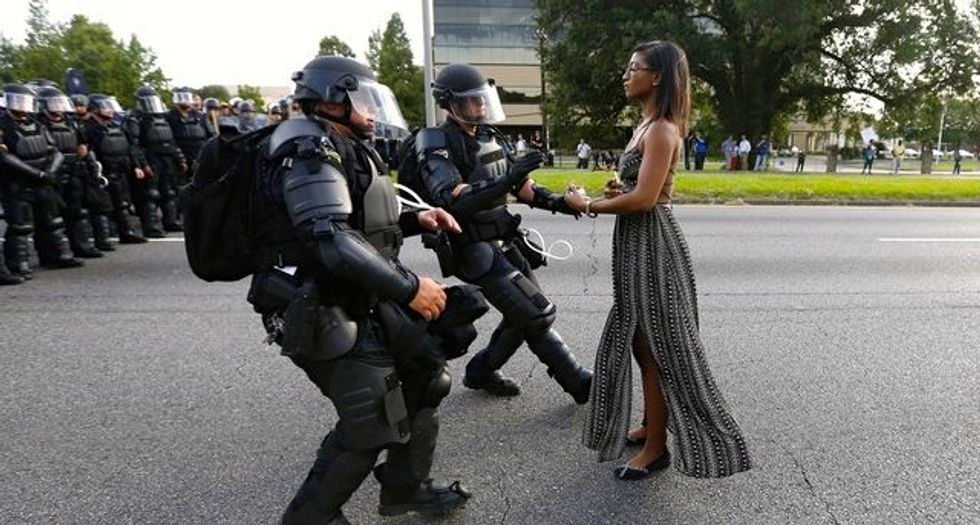 A demonstrator protesting the shooting death of Alton Sterling is detained by law enforcement near the headquarters of the Baton Rouge Police Department in Baton Rouge, Louisiana, U.S. July 9, 2016. REUTERS/Jonathan Bachman

The black woman who was photographed in a long, flowy dress standing before a pair of heavily-geared riot police during a protest in Baton Rouge last weekend gave her first public interview since the photo went viral, CBS News said on Thursday.

Ieshia Evans, 35, was made famous by the widely-shared picture, which encapsulated for some the spirit of demonstrators across the United States protesting against how police treat people of color. The photo was snapped by Reuters freelance photographer Jonathan Bachman.

Evans, a licensed nurse, spoke to CBS This Morning co-host Gayle King about the July 9 incident, saying she felt compelled to walk into the street even though police had ordered protesters off the roadway.

Baton Rouge has become a flashpoint for protesters after Alton Sterling, 37, was shot and killed last week by city police who were responding to a call that he had threatened someone with a gun outside a convenience store where he was selling CDs.

Sterling's death, followed by the fatal shooting of another black man, Philando Castile, 32, near St. Paul, Minnesota, revived a wave of protests that has swirled for two years under the name Black Lives Matter.

Bachman said police had cleared a group of protesters from the road before Evans walked onto the highway and stood before a wall of officers. Her face bore no expression and she did not speak, he said.

Bachman said the officers grabbed Evans and hurried her away, with the whole incident lasting only about 30 seconds. Evans was arrested on a charge of simple obstruction of a highway and released from custody, according to a jail log from the East Baton Rouge Sheriff's Office.