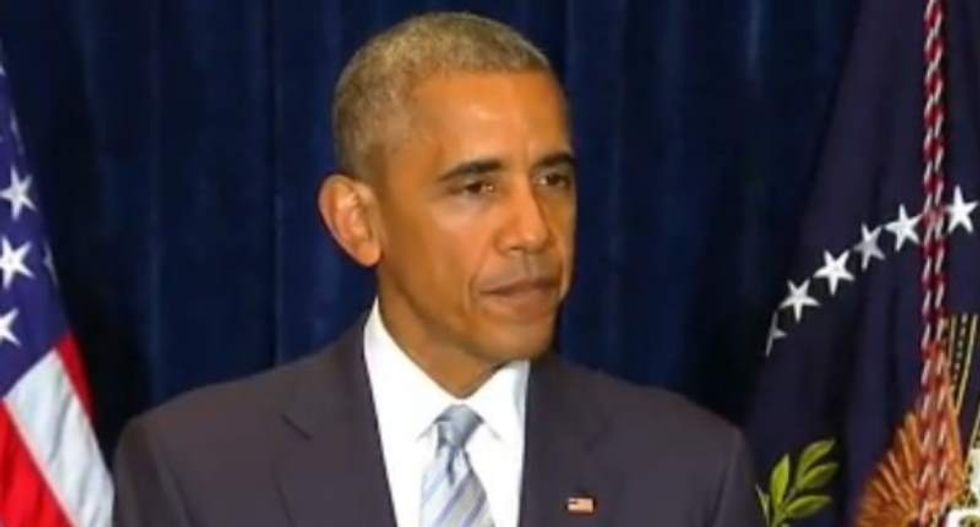 President Barack Obama on Friday signed into law a measure that pledges greater efforts to protect drug-dependent newborns and assist their parents.

Obama said in a statement that 78 Americans die from opioid overdose every day, and noted that the legislation included only modest steps to address the epidemic.

"I am deeply disappointed that Republicans failed to provide any real resources for those seeking addiction treatment to get the care that they need," Obama said. "In fact, they blocked efforts by Democrats to include $920 million in treatment funding."

The bill was passed nearly unanimously by both the House of Representatives and the Senate.

Efforts to enforce provisions to protect newborns and help their parents come in response to a Reuters investigation last year titled "Helpless & Hooked."

The new law requires that the federal government and every state follow a 2003 law that was routinely ignored. That law called on states to require hospitals and social services to report, track and assist drug-dependent newborns and their families.

Reuters found that no more than nine states were following that requirement. Most children born to addicted mothers, including many mothers who were taking prescribed methadone, were not being reported by hospitals as required by law. Often, that was because medical workers feared involving child protective services, as the existing law requires. When cases were reported to social services, Reuters found, efforts to protect the child and help the parents often were limited.

The failures came at a cost. Reuters found more than 110 babies since 2010 died under preventable circumstances after being sent home to families ill-equipped to care for them. Experts said far more children have likely died but gone uncounted.

The new law promises a non-punitive approach that includes "safe care plans" aimed at keeping newborns at home with their parents, who will receive additional help.

"This is a step forward for vulnerable babies who, due to an opioid dependency, will begin their lives facing enormous challenges," said Senator Bob Casey of Pennsylvania, the ranking Democrat on the Senate subcommittee on children and families. "Reuters’ initial reporting shined a light on a darkness that had enveloped far too many lives. There is much more work to do but this is a genuine step forward."

Representative John Kline, a Minnesota Republican who chairs the House Committee on Education and the Workforce, which initiated the measure, said it will track state actions.

"These reforms are an important part of our broader efforts to combat the nation’s opioid epidemic and provide these vulnerable families a better chance at a brighter future," Kline said in a statement.

In 2013, the latest year with nationwide hospital reporting, 27,315 babies were diagnosed with newborn drug withdrawal syndrome, a five-fold increase from a decade earlier.

Reuters found that one drug-dependent baby was born on average every 19 minutes in the United States. Some suffer shaking, crying and feeding problems as they battle withdrawal.

Senator Ron Wyden of Oregon, the ranking Democrat on the Senate Finance Committee, said the broader addiction law was "no more than a half measure" without more funding. Wyden has co-sponsored a measure setting aside money for substance abuse treatment for parents in danger of losing their children. It passed the House but stalled in the Senate.

Jim Greenwood, a former Pennsylvania congressman who championed the 2003 law, said the deaths Reuters revealed represent "a national disgrace and glaring failure at the federal, state and local level to implement Plans of Safe Care for infants." Greenwood, now president of a Washington, D.C.-based biotechnology group, applauded the new measure "to improve the health and safety of these babies and their families."

Stephen Patrick, an assistant professor of pediatrics at Vanderbilt University and leading researcher on the condition, said the new law is "good news" but added: "Wish there was funding that came with it."