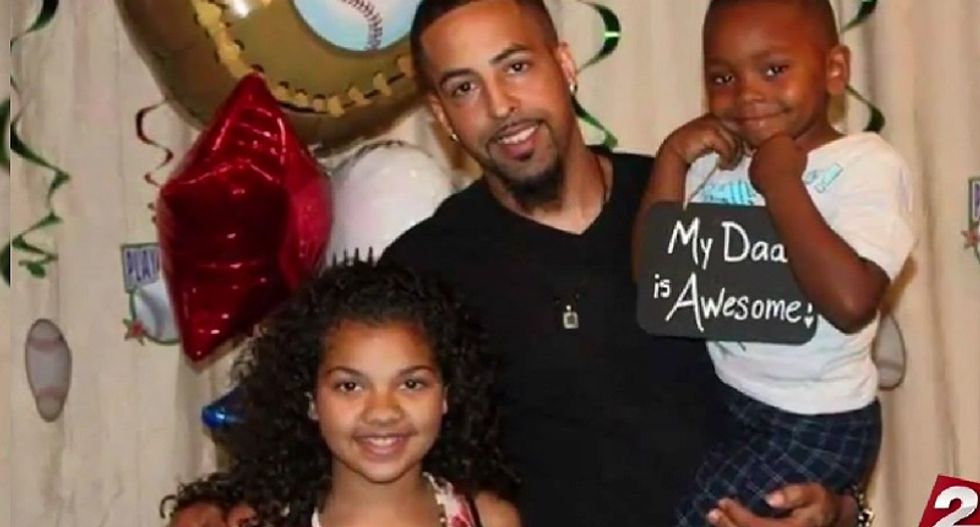 A trip to Dave & Busters for some downtime turned into a nightmare for an African-American family from Oregon when their dad was wrongly accused of stealing $16 from a lost wallet, the Oregonian reports.

Rachel Batiste-Barber recounted the incident on her Facebook page and said she went to the Happy Valley Dave & Buster's with her husband, Andre, and children after finding a coupon for the restaurant chain known for its kid-friendly arcades. She said the family played peacefully for more than an hour -- until a teenage girl's purse went missing.

The girl found it at the front desk, with $16 missing from it, Batiste-Barber wrote. The employees told her a black man with cornrows had turned it in, and that she should go find him to ask him about it.

"Dre was the likely the only black person with cornrows in gahtdamb Clackamas County," Batiste-Barber wrote. "So of course... They come find us. And accuse him of stealing SIXTEEN dollars. In front of our children."

Batiste-Barber said she then went to talk to the employees at the counter.

When I arrived at the counter a young blonde girl was standing there. And the mother of the 16 year old girl said "she's the one". I asked the employee what was going on and she said "yeah. When you guys paid me, a little while ago, HE (points to my husband) paid me in all ones and turned in that purse. This was strange to me because When my family and I arrived at 5:45 this young lady was outside on her break crying on her phone about a new manger. She wasn't even in the building. Additionally, we has already been there almost 1.5 hours. And our bill ended up being $46. Not $16. Which I had receipts for. Furthermore, the gentleman that ACTUALLY checked us in was standing right there and said "no they didn't. They paid me. A long time ago."

Even after a second employee refuted the claim that Dre had been the one to turn in the wallet, Batiste-Barber wrote that four security guards still approached the family -- and then the police. She wrote the employees either refused or were not able to check the store's security cameras after she asked them to.

"The police arrived. Informed us, in front of our kids, that a crime had been committed, and that we needed to be questioned," she wrote. "After a couple of minutes they escorted my family and I outside. When we explained to the cop that the employee doesn't even know the description so how could my husband 'fit it' he explained 'he just does.' My husband's name was run through the system 'checking for warrants.' Mind you, they still hadn't talked to the employee."

Batiste-Barber wrote that Dave & Busters did nothing to make the situation right, even after Dre had been cleared of any wrongdoing and told by police they were free to go. She said the restaurant still asked her family to leave, even though they had done nothing wrong.

"We didn't do anything wrong besides be black with cornrows. But we were here to have fun. We paid to be here. Our family was in the middle of game play," she wrote. "We came here to enjoy ourselves."

The chain released a statement apologizing for the incident.

"Dave & Buster's is committed to maintaining an inclusive environment that's welcoming to all guests," a marketing executive told KATU. "We sincerely apologize to the Batiste family for their distressing experience. This matters to us and irrespective of the outcome of our internal investigation, we will be re-educating our team on sensitivity and guest relations."

But Batiste-Barber wrote the frightening incident has shaken her. One of the saddest takeaways, she wrote, was "the fact that a white woman can point her finger at a black man and he's automatically assumed guilty by everyone around. Even when you can and HAVE provided proof that she's incorrect and/or lying."

She also told KATU, "I was frustrated to the point of tears, I was angry, I was hurt... my husband was very calm and was very much like, 'I’m used to this.' I think that’s what hurts the most, is that this is so common."

Watch the report, from KATU, here: