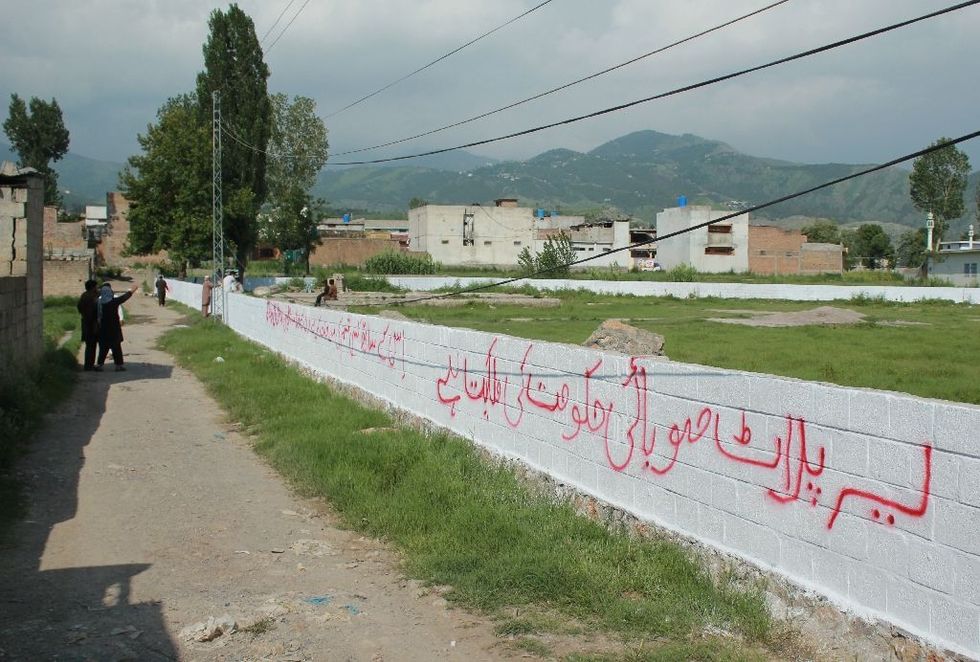 Pakistani workers mark a wall around the 3,800 square feet plot where the compound of Al-Qaeda leader Osama Bin Laden once stood, in Abbottabad on July 23, 2016 (AFP Photo/Shakeel Ahmed)

A dispute has broken out over the future of the site where Osama Bin Laden was shot dead in 2011, with authorities pushing rival plans for a graveyard or playground.

The military has erected a wall around the 3,800 square feet plot where the Al-Qaeda leader's compound once stood in the garrison city of Abbottabad, and wants to convert it into a graveyard.

But the local provincial government, which was handed the land after Bin Laden was killed by US special forces, is trying to redevelop it as a playground.

"We have secured this place from encroachment by building a wall around it and now we will develop this into a graveyard because there is a serious issue of unavailability of graveyards in the area," Zylfiqar Ali Bhutto, vice president of the military-run Cantonment Board of Abbottabad (CBA), told AFP.

However, Mushtaq Ghani from the Khyber Pakhtunkhwa provincial government, opposed developing a cemetery in the built up area.

"You can't develop a cemetery in the middle of houses."

Butto insisted CBA had the authority to push ahead with it plans.

"We are going to meet the provincial government officials next week and will sort out this issue," he said.

Elite US Navy Seals launched a helicopter raid on the highly fortified compound on May 2, 2011, killing Osama Bin Laden and taking away his body. Pakistani authorities later demolished the building and left the plot vacant.

The killing was a huge success for US President Barack Obama and decapitated Al-Qaeda.

But it drove a wedge between Islamabad and Washington, with lingering suspicions that the Pakistanis had for years been covering up the whereabouts of one of the world's most wanted men.