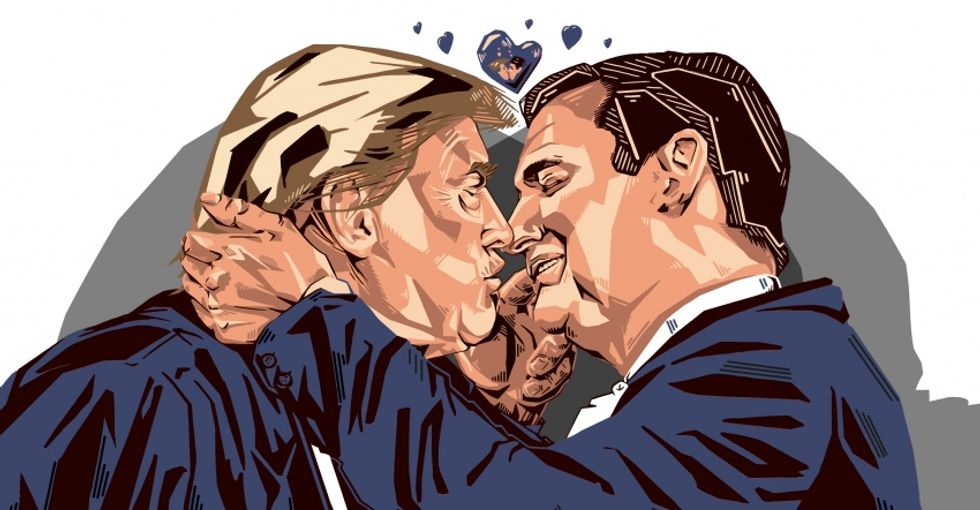 A pro-LGBT group has decided to troll the GOP with a billboard that's guaranteed to offend everyone for one reason or another.

Planting Peace on Thursday erected a billboard right outside the location of the Republican National Convention in Cleveland that depicts Republican primary rivals Donald Trump and Ted Cruz embracing and preparing to kiss. The caption on the billboard reads, "Love Trumps Hate. End Homophobia."

The billboard is going up just as the Republican platform committee passed what gay Republican groups are calling the most homophobic party platform in the GOP's history.

In explaining its decision to put up the billboard, Planting Peace explained that it wanted to challenge Republicans to think about how homophobia affects young gay people across the United States.

"We challenge the GOP to think about how many times their children could hear messages like these and not be impacted or question their value and worth?" the group writes. "These messages sink our young people into a spiral of depression and directly correlate to queer youth attempting or actually committing suicide. The blood of these children is on the hands of the anti-LGBT platform of the republican party."

Whether this actually changes Republican hearts and minds -- or just angers them further -- is at this point an open question, however.