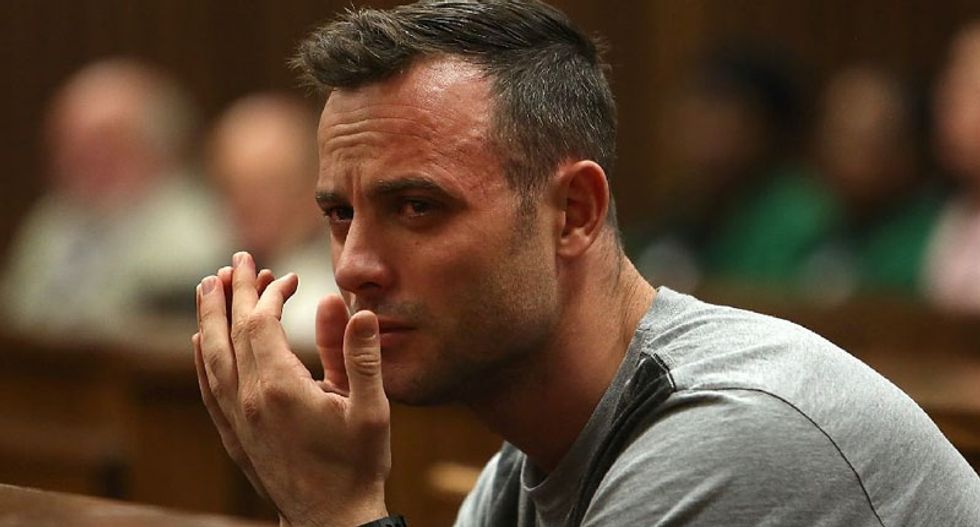 South African prosecutors said Thursday they would push for a longer sentence for Oscar Pistorius, describing his six-year jail term for murdering his girlfriend Reeva Steenkamp as "shockingly too lenient".

After he was sentenced earlier this month, Pistorius' lawyers said the double-amputee Olympic sprinter would not appeal against the term, which was criticised by many activists as too short.

"The sentence of six years imprisonment, in all the circumstances, is disproportionate to the crime of murder committed (and) shockingly too lenient," the National Prosecuting Authority said in a strongly worded statement.

The NPA said the sentence was "an injustice and has the potential to bring the administration of justice into disrepute", saying it would file papers to apply for leave to appeal on Thursday.

Pistorius shot Steenkamp, a model and law graduate, in the early hours of Valentine's Day in 2013, saying he mistook her for a burglar when he fired four times through the door of his bedroom toilet.

At his sentencing, High Court judge Thokozile Masipa listed mitigating factors for giving him to less than half the minimum 15-year term for murder, including the athlete's claim he believed he was shooting an intruder.

"He cannot be at peace. I'm of the view that a long term of imprisonment will not serve justice," said Masipa.

She was also the judge who had originally convicted him of the lesser charge of culpable homicide, the equivalent of manslaughter.

Members of the ruling African National Congress women's league, who attended many court sessions, have criticised the sentence for failing to send a strong message against domestic violence in South Africa.

Pistorius, 29, previously a role model for disabled people worldwide, is being held in Kgosi Mampuru II prison in Pretoria.

He was released from the same jail last October after serving one year of a five-year term for the culpable homicide conviction.

But an appeals court upgraded his conviction to murder in December.

At a sentencing hearing in June, a sobbing Pistorius hobbled on his stumps across the courtroom to demonstrate his physical vulnerability.

His lawyers argued he should not be returned to jail on account of an anxiety disorder and depression.

But Steenkamp's father Barry told the court that he wanted Pistorius to "pay for his crime" of murdering Reeva.

Pistorius, who pleaded not guilty at his trial in 2014, has always denied killing Steenkamp in a rage, saying he was trying to protect her.

The Supreme Court of Appeal last year ruled he was guilty of murder, irrespective of who was behind the door when he opened fire with a high-calibre pistol he kept under his bed.

Barry Steenkamp and his wife June issued a statement on the latest twist in the long legal case, saying they "always fully supported (prosecutor) Gerrie Nel and his team's fight for justice".

Law expert Llewellyn Curlewis told AFP that the state "has a good chance of a successful appeal."

"To prohibit a precedent being set, the Supreme Court of Appeal might be inclined to hand down a more severe sentence," he said.

The year before he killed Steenkamp, Pistorius became the first double-amputee to race at Olympic level when he appeared at the London 2012 games.

He said in a recent television interview that he believed Steenkamp would want him to devote his life to charity rather than to be in prison for killing her.

Saying he believed an intruder was in the house and seconds from their bedroom, Pistorius said an "instant fear" drove him to grab his gun and walk on his stumps towards the bathroom.

"All of a sudden I hear a noise, at the toilet. I presumed it was the toilet door opening and before I knew it I'd fired four shots."