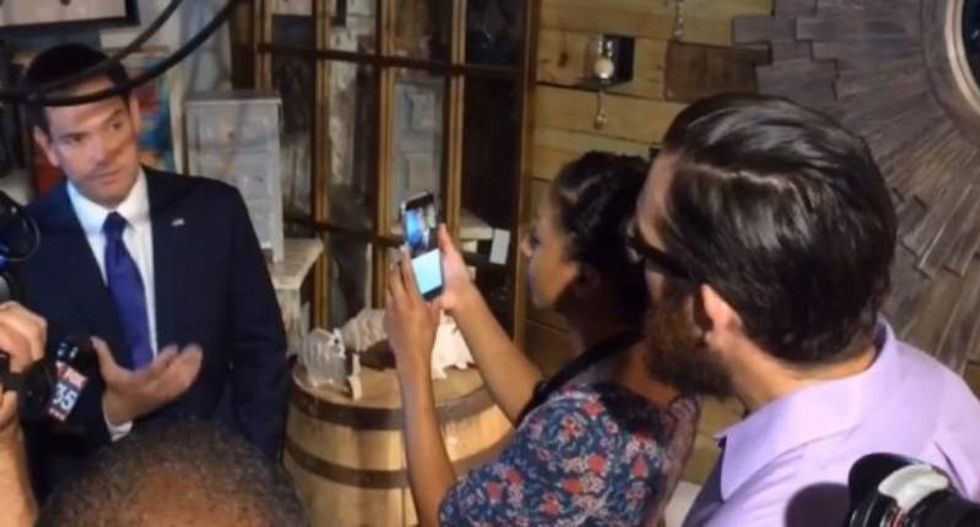 A group of about 30 demonstrators disrupted Rubio's visit to some businesses near the Pulse nightclub, where 49 people were killed in a mass shooting attack last month. One of the protesters, David Moran, confronted Rubio directly.

"I need to know: what is your relationship is with the NRA?" Moran asked the senator. "Why are you talking with transphobes and homophobes like John Stemberger? All of you have blood on your hands."

According to the Gay and Lesbian Alliance Against Defamation, Stemberger is president of the Florida Family Policy Council, which was designated as an anti-gay hate group by the Southern Poverty Law Center in 2010. He also endorsed Rubio's failed presidential campaign in June.

"I disagree with your assessment, including some of the people you mentioned," Rubio said to Moran. "Homophobia means you're scared of people. I'm not scared of people. Quite frankly, I respect all people. We probably have a disagreement on the definition of marriage."

"Yeah, that's an unfortunate thing for you to say," a visibly frustrated Rubio replied as Moran continued.

"You have to protect us," he said. "You're not protecting us. We're going to be gunned down. You have blood on your hands, and you cannot deny it."

Rubio then turned away from Moran and asked a member of the press for another question.

According to WFTV-TV, Rubio said he wanted to see that some of the $17 million raised online to benefit victims of the shooting be allocated toward helping business owners near the nightclub, who have seen a decrease in customers since the attack.

Watch a report on the encounter, as aired on WFTV, below.