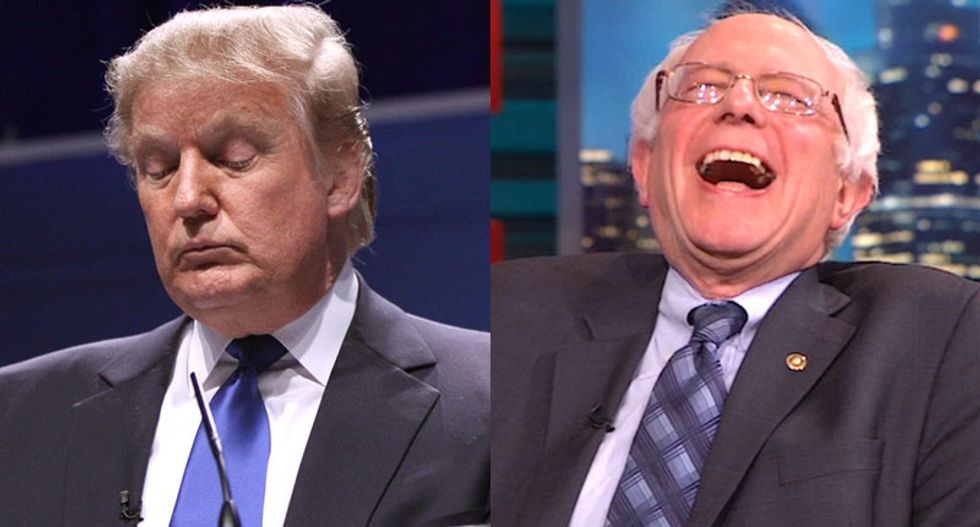 Attempting to shore up a campaign that is lacking in funds as much as potential voters, presumptive GOP presidential nominee Donald Trump took to Twitter to recruit Bernie Sanders followers who are disappointed with the Vermont senator's endorsement of Hillary Clinton Tuesday morning.

Prior to the rally, where Sander's threw his support behind Clinton and attacked Trump, he wrote: "Bernie Sanders, who has lost most of his leverage, has totally sold out to Crooked Hillary Clinton. He will endorse her today - fans angry!"

In that vein, he continued, "I am somewhat surprised that Bernie Sanders was not true to himself and his supporters. They are not happy that he is selling out!"

Commenters, who see a substantial difference between the Vermont senator who built his campaign on income inequality and the New York businessman who opposes raising the minimum wage, begged to differ, with one writing, "you’re more used to going bankrupt than selling out."

@realDonaldTrump I am somewhat surprised that you're still running when it's clear women are going to rule the world starting this year.
— Tom Bwana (@Tom Bwana) 1468331086.0

@realDonaldTrump You truly mistake @BernieSanders supporters. We all know you're worse than everyone else. #NeverTrump
— Tom W (@Tom W) 1468345664.0

@realDonaldTrump Bernie supporters are not nearly as dumb as your base. This is embarrassing.
— Chris Jackson (@Chris Jackson) 1468343135.0

Speaking for most of America: