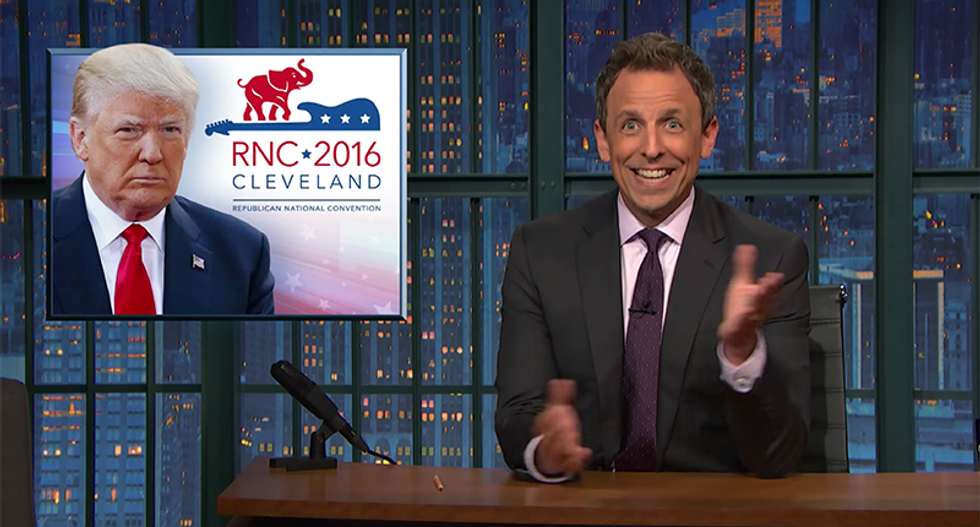 The Republican convention hasn't exactly gone as smoothly as the RNC would have wanted it. Whether it was the delegate revolt, the insults Ohioans fielded, plagiarism and overt racism, that made it ripe for Seth Meyers' brutal mockery in his "Closer Look" series.

He began with an astute observation that GOP nominee Donald Trump failed to attract the Hollywood A-listers, settling instead for the likes of Scott Baio, former soap opera stars and folks you'd likely only see on VH1's "Where are They Now."

"Scott Baio was a surprising choice to speak, especially if you're old enough to remember, they barely let him talk on 'Happy Days,'" Meyers joked.

But most eyes were on the #NeverTrump delegates who worked to force a floor vote to topple Trump, resulting in what many referred to as "the sh*tshow." "Eventually, convention leaders were able to quash the revolt, which was actually a very symbolic event," Meyers explained. "It was the moment at which the last dissenting voices were quieted and the Republican Party officially embraced the politics of Trumpism. And almost immediately, Republicans made clear what the party of Trump represents when Iowa Congressmen Steve King made some incredibly incendiary comments, in which he claimed that no other 'subgroup of people had contributed more to civilization than white people.' And the MSNBC panel appropriately exploded."

Meyers showed the clip of panelists looking as if they were about to climb across the desk at King. Then he moved on to jeer the way in which "Trump beamed down from his spaceship to greet the people of Earth. It should be noted, Trump entering the convention to a song by Queen is like starting a KKK rally with 'Straight Outta Compton.'

Monday night was supposed to belong to Melania Trump, who sought to humanize her husband. "By all accounts, she did a wonderful job until the Trump campaign found a way to screw it up," Meyers said about the plagiarism scandal. "Melania did it. She found something less original than being a model married to an old billionaire. Even worse, Melania went on to describe her husband as a loving father to their two girls, Sasha and Malia."

Most expect these speeches to be done by speechwriters, however, Melania told Matt Lauer on the "Today Show" that she wrote it herself, "with as little help as possible." Meyers then brought up that it "isn't as if Trump himself has criticized and accused others of plagiarism. Like Joe Biden, who admitted plagiarizing a speech when he ran for president in 1988," he said before playing a clip of Trump trashing Biden for plagiarism on Hugh Hewitt's radio show.

"I haven't been involved in plagiarism, but just give me a few months, I'll be great at it. I'll be the best at plagiarism," Meyers said in his Trump voice.

Aside from the fearmongering and overt racism The display of incompetence was ironic, Meyers noted. “I mean, they ripped off a passage about the value of hard work. And yet, when Tuesday morning came, Trump supporters were trotting out flimsy excuses for the mistake rather than owning up to it. Like brain surgeon and brain donor Ben Carson, who actually made the case that the plagiarism was a good thing."

But the best came from RNC staffer Sean Spicer who, used the novel tactic of citing plagiarism he found from "My Little Pony" as a way to prove that Melania didn't plagiarize her speech or that it was somehow acceptable. "You know, I'm willing to bet even Twilight Sparkle would say that explanation is a steaming pile of My Little Pony crap," Meyers argued.

"Look, the plagiarism itself isn't the big issue, the real issue here is that Trump claims to be a great president because he's a great manager because he hires the best people. A dumb mistake like a plagiarized speech at a convention undercuts that. I mean, after all, Trump has assured us: 'I know words, I have the best words.' It's true. He has the best words and now we know where he gets them from."

According to the Washington Post's Greg Sargent, the DOJ has not only been holding back investigative information about the Trump administration from House committee's launching their own inquiries but has also been running interference for the former president -- and that has some Democrats frustrated.