SNL's mock Justice Ginsburg slams Trump: 'If my mind is shot -- his is shot, stabbed and strangled' 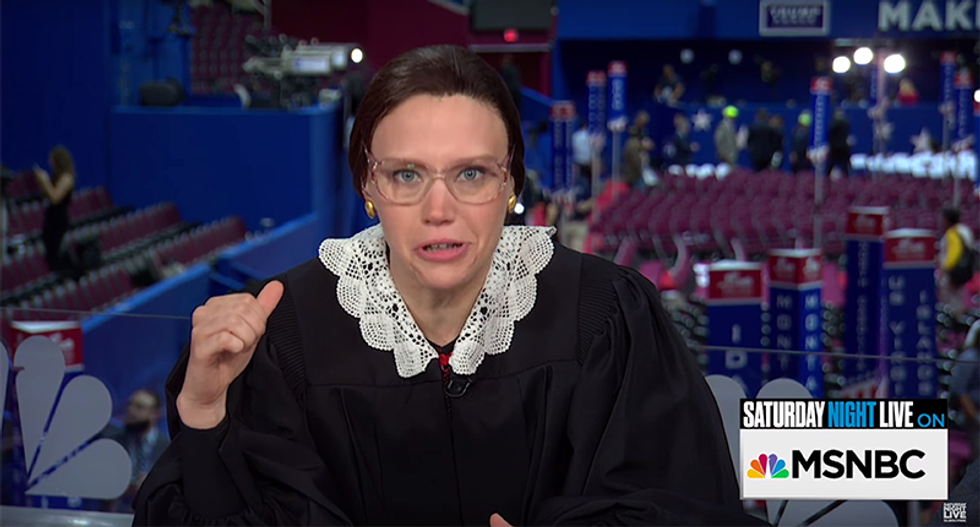 In a special episode of Saturday Night Live that aired after the Republican National Convention on MSNBC, castmember Kate McKinnon reprised her role as Supreme Court Justice Ruth Bader Ginsburg to give Donald Trump and the rest of the GOP the ultimate slam.

“Trump picked a fight with the wrong 15-pound, 200-year-old marionette, baby!” she said. When Jost reminded RBG that Trump attacked her claiming her “mind is shot,” she slammed, “If my mind is shot, then Donald Trump’s mind is shot, stabbed, strangled, put in a vat of wet cement, and dumped in the Gowanus Canal.”

There were lots of jokes about how small RBG is, and McKinnon joked she's doing an Airbnb in a coffee pot while Tinkerbell looks for a Planned Parenthood in Indiana.

When it comes to the rumors that Trump might pick Chris Christie to fill the Supreme Court vacancy left by Antonin Scalia, Ginsburg said, “I’d rather have an empty chair than a broken chair.”

The rest of the special "Weekend Update" showed co-host Michael Che playing his own version of Pokemon Go called Trumpemon Go, where Che searches the RNC for people of color. No, Duck Dynasty's Willie Robertson doesn't count as Amish.

“Mike Pence still finished speaking and you still feel the electricity in the room, static electricity, created by all the shoes softly shuffling toward the exit,” Jost said. But it was Ted Cruz that got the audience all riled up when he said people should “vote your conscience” instead of giving Trump his endorsement. Even Newt Gingrich had a flummoxed moment.

“That’s where we’re at now,” Jost said. “People are booing the idea of listening to your conscience. It’s like a Jiminy Cricket showed up, and was like, ‘Always let your conscience be your guide’ and everyone was like, ‘Ah, a cricket, kill it!’”

The two mocked nearly every speaker, but the best was their attack on former New York Mayor Rudy Giuliani, who wouldn't stop screaming in his speech. “Nothing unites people like screaming at them. It sounds like his cable went out in the middle of 'Price is Right,'" Jost joked. During his speech, Giuliani had some trouble pointing in the direction of his words. He gestured down when he said up and up when he talked about the bottom. “He only got one out of four directions right!" Jost exclaimed. Che explained it's what happens when the Ying Yang Twins write your speech. "Ying Yang Twins, by the way, is also what Trump calls the leaders of North and South Korea," Jost said.