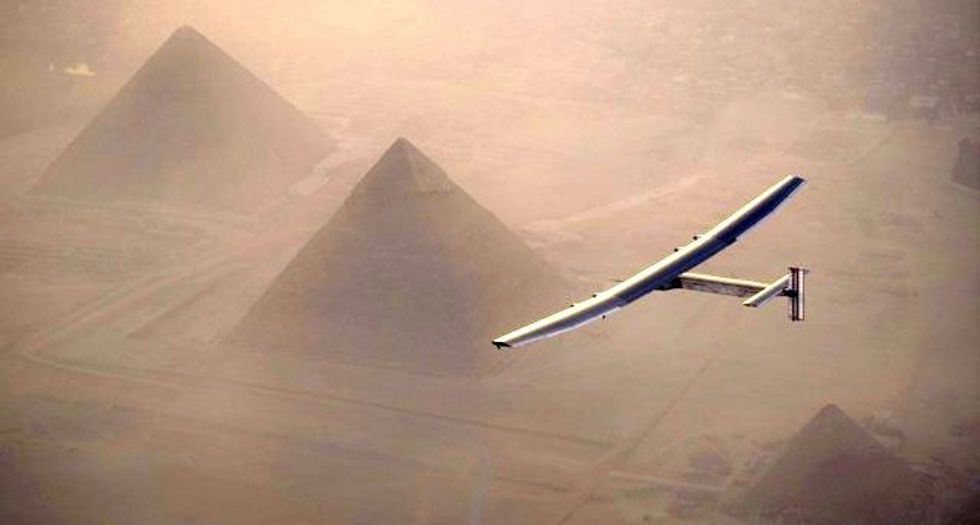 Solar Impulse 2, the solar powered plane, piloted by Swiss pioneer Andre Borschberg is seen during the flyover of the pyramids of Giza on July 13, 2016 prior to the landing in Cairo, Egypt in this photo released on July 13, 2016. Jean Revillard/SI2/Handout via Reuters

A solar-powered aircraft successfully completed the first fuel-free flight around the world on Tuesday, returning to Abu Dhabi after an epic 16-month voyage and demonstrating the potential of renewable energy.

The plane, Solar Impulse 2, touched down in the United Arab Emirates capital at 0005 GMT (0405 local time) on Tuesday.

Unfavorable weather at times hindered smooth flying, causing the plane to be grounded for months in some countries.

Swiss explorers Bertrand Piccard and André Borschberg, Solar Impulse founders and pilots, took turns piloting the aircraft with a wingspan larger than a Boeing 747 and weighing only as much as a family car.

The Swiss team is campaigning to bolster support for clean energy. The propeller-driven aircraft's four engines are powered exclusively by energy collected from more than 17,000 solar cells built the plane's wings. Excess energy is stored in four batteries during daylight hours to keep the plane flying after dark.

Over its entire mission, Solar Impulse 2 cruised at altitudes of up to 9,000 meters and at an average speed of between 45 and 90 km (12.5 and 25 miles) per hour. The plane had 16 stopovers along the way including in Oman, India, Myanmar, China, Japan, the United States, Spain and Egypt.

Abu Dhabi’s green energy firm Masdar is the official host partner of Solar Impulse 2. Oil-rich Abu Dhabi is investing billions in industry, tourism and renewables to diversify its economy away from oil.