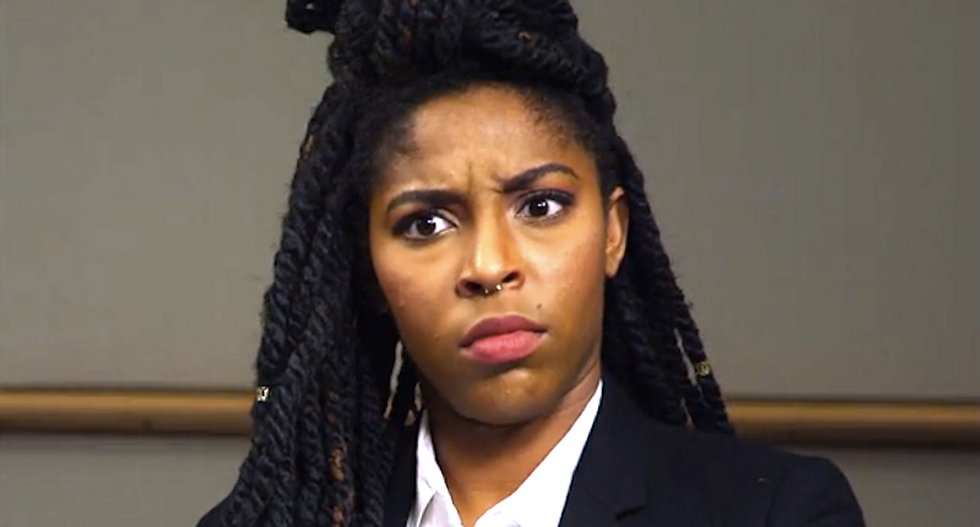 Jessica Williams kicked a hornet's nest on her way out the door at "The Daily Show" by scolding Bernie Sanders supporters who are thinking of voting for Donald Trump.

"Bernie-or-bust" voters don't always like to admit it, but polls have shown that nearly one-fourth of them would back Trump -- the radioactive but presumptive Republican nominee -- over Hillary Clinton.

Williams, the departing correspondent, gathered six Sanders loyalists together on her last appearance on "The Daily Show," which has struggled to find its footing since the departure of Jon Stewart nearly a year ago.

Three male voters -- black, Hispanic and white -- told Williams they would "probably be looking at Trump," whose campaign has been characterized by racist rhetoric and proposals, as Williams looked on in bewilderment.

"He has diarrhea of the mouth, but a lot of things that he says are things that a lot of people may think," said the Hispanic voter.

"Racist things, I would say, yeah," the voter admitted.

"He is a bigot and a racist," one woman admitted, but started to qualify her statement with a "however."

"You don't have to continue with 'however,'" Williams told her. "Where you gonna go with that?"

"I'm about to go there," the woman said. "Hillary has been a scam artist all her life, and I hope the FBI comes and indicts her."

Williams said she started to suspect these Sanders supporters didn't actually like Trump, but perhaps had other motivations.

"Hillary will bring us to war within 90 days of her inauguration," the same woman said.

A second woman weighed in, saying Clinton was "just a stack of garbage."

"She's more like a leprechaun to me," said the black man on the panel.

"What has a leprechaun ever done to you?" Williams said.

"They disgust me," the man said.

Williams wondered how these voters could go from a "left-wing progressive" like Sanders to Trump -- "a man who worships money only slightly less than he worships himself."

She asked the voters to identify one thing that Trump and Sanders had in common.

"Bernie and Donald do not have a super PAC," said the woman who called Trump a bigot and racist.

Williams pointed out that Trump actually had several super PACs.

"Bernie and Trump both don't have hair," the Hispanic man said.

"Wow, okay," Williams said. "Anything else?"

"They're both old," he added. "They both want to be president."

Williams wondered how these voters couldn't see the similarities between Sanders and Clinton, who both ran as Democrats.

"Their views are totally opposite," the black man said.

Williams asked the man to compare Sanders' views to Trump's, and he responded with, "okay."

"Okay, what?" Williams said. "Are they totally opposite?"

The man never answered, but he squinted his eyes in thought and appeared to begin an affirmative nod, but couldn't commit to the gesture -- which Williams compared to a robot short-circuiting.

"These are real people who are going to vote," Williams said.

The panelists correctly identified quotes attributed to Sanders and Trump, although one woman was tricked into guessing Trump instead of Adolf Hitler, and Williams told them that's because the candidates were so different.

"It's not going to Trump, it's going away from Hillary Clinton," said the woman who compared the presumptive Democratic nominee to garbage.

She asked the panel if they would prefer to have a "100 percent turd, instead of a maybe-secret turd" -- and every voter quickly agreed.

"What if that maybe-dookie turns out to be just okay, and a little less progressive than Bernie Sanders?" Williams asked.

"Then I guess we'll have to chew on that," said a white man on the panel.

Former first lady Melania Trump was buried in an avalanche of derision after a clip was posted of her telling a Fox News host that she didn't have time to sit for a Vogue photoshoot -- that could have landed her on the cover -- when she was still in the White House.

Speaking with Peter Hegseth, the former model who became Donald Trump's third wife in 2005, complained that editors at the highly influential fashion magazine were biased against her and she had no time for them.