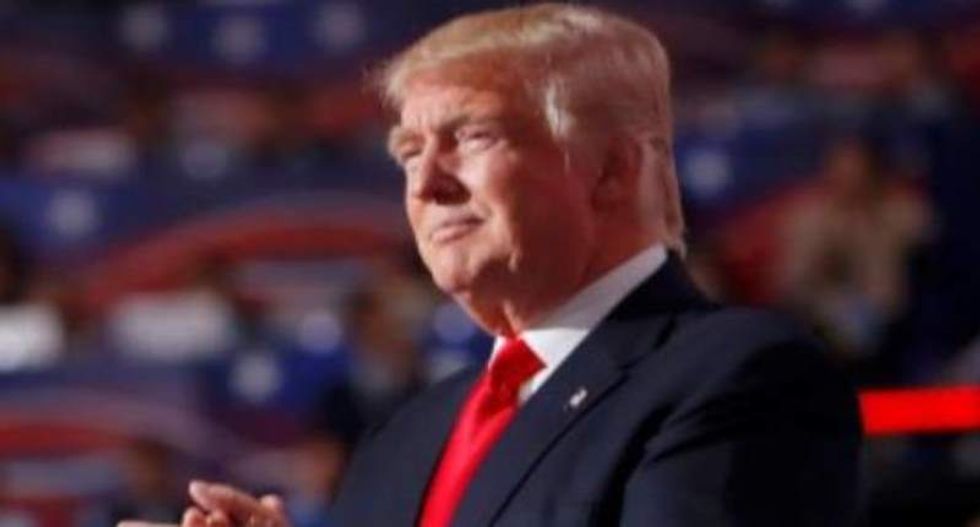 Donald Trump accused Democratic rival Hillary Clinton of a legacy of "death, destruction, terrorism and weakness" as U.S. secretary of state and vowed to be tough on crime and illegal immigrants in a speech on Thursday accepting the Republican presidential nomination.

Trump's speech of more than an hour was designed to set the tone for the general election campaign against Clinton, an answer to Republicans who say the best way he can unify the divided party is to detail why the Democrat should not be elected on Nov. 8.

As the crowd chanted: "Lock her up" for her handling of U.S. foreign policy, Trump waved them off and said: "Let's defeat her in November." Thousands of supporters who were gathered in the convention hall roared their approval.

The acceptance speech by Trump, 70, closed out a four-day convention that underscored his struggle to heal fissures in the Republican Party over his anti-illegal-immigrant rhetoric and concerns about his temperament. The event was boycotted by many big-name establishment Republicans, such as 2012 nominee Mitt Romney and members of the Bush family that gave the party its last two presidents.

He vowed to build a "great border wall." He said illegal immigrants were taking away jobs from American citizens and in some cases committing crimes.

"We will stop it," Trump said.

As president, Trump said he would avoid multinational trade deals but instead pursue agreements with individual countries. He would renegotiate the NAFTA trade accord linking the United States, Canada and Mexico. He would penalize companies that outsource jobs and then export their foreign-made products back into the United States.

The New York businessman, who has never held elected office, filled his speech with some of the bravado he used to win the Republican nomination over 16 rivals, punctuating his rhetorical points by waving an index finger.

"I have joined the political arena so that the powerful can no longer beat up on people that cannot defend themselves," Trump said. "Nobody knows the system better than me, which is why I alone can fix it."

In his speech, Trump portrayed himself as a fresh alternative to traditional politicians, willing to consider new approaches to vexing problems and help working-class people who may feel abandoned.

Laying out his case against Clinton, he denounced nation-building policies that were actually put in place to some extent by George W. Bush, without mentioning by name the Republican president who launched wars in Afghanistan and Iraq.

Trump said policies pursued by Clinton in Iraq, Libya, Egypt and Syria had made a bad situation worse. He blamed her for the rise of Islamic State militants and blasted her willingness to accept thousands of Syrian refugees.

"After 15 years of wars in the Middle East, after trillions of dollars spent and thousands of lives lost, the situation is worse than it has ever been before. This is the legacy of Hillary Clinton: death, destruction, terrorism and weakness," Trump said.

'THINGS HAVE TO CHANGE'

Trump needed a strong performance on Thursday night to improve his chances of getting a boost in opinion polls as Democrats prepare for their own, more scripted convention next week in Philadelphia.

In a contest that pits two politicians viewed as unfavorable by large segments of the American people, Trump also accused Clinton, 68, of being the puppet of big business, elite media and major donors who want to preserve the current political system.

Trump said he would speedily address the violence that has dominated headlines, such as the shooting deaths of five Dallas police officers earlier this month. He vowed to defeat "the barbarians of ISIS," the acronym for Islamic State.

"I have a message for all of you: The crime and violence that today afflicts our nation will soon come to an end. Beginning on Jan. 20, 2017, safety will be restored," Trump said. The next president takes office on Jan. 20.

As he finished his speech, his family appeared on stage to greet him, as red, white and blue balloons were dropped from the ceiling of the convention hall and confetti sprayed around the crowd.

The prevailing narrative at the Cleveland convention has not been about Trump's positions, but dominated instead by the failure of he party's various factions to unite behind Trump.

A series of distractions at the convention largely thwarted a bid by the Trump campaign to show him as a caring father and magnanimous business leader who would bring greater prosperity and safety to the United States.

But in the end, many of these points were made when Ivanka Trump, Trump's daughter, introduced her father.

Trump's text of his speech, released by his campaign, included extensive footnotes to show where the material originated.

That was perhaps in reaction to the speech given on Monday night by Trump's wife Melania, who was accused of plagiarism when she repeated lines from a 2008 speech by Michelle Obama, Obama's wife.

A staff writer for the Trump Organization later took responsibility for the misstep.