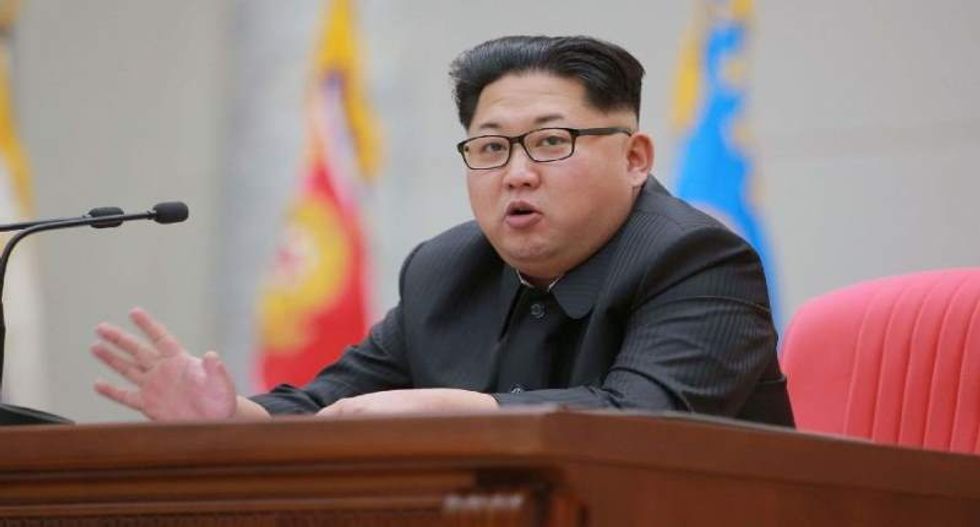 North Korea's young leader Kim Jong-Un, who was personally blacklisted by the United States for the first time over allegations of human rights abuses, has repeatedly shrugged off pressure by the international community while asserting absolute control over the reclusive state.

In his late 20s when he took over from his late father Kim Jong-Il four and a half years ago, the younger Kim was considered untested, vulnerable and likely to be manipulated by senior figures.

But he has proved his mettle in dealing harshly -- sometimes brutally -- with any sign of dissent, even at the highest levels, while maintaining an aggressively provocative stance with the international community.

The latest move by the United States marks the first time that Kim has been sanctioned personally, and the first linked to the systemic human rights abuses in the country, where between 80,000 and 120,000 prisoners languish in political prison camps.

"Under Kim Jong-Un, North Korea continues to inflict intolerable cruelty and hardship on millions of its own people," said Adam Szubin, the US Treasury's acting under secretary for terrorism and financial intelligence.

The new blacklist, which also names 10 other top officials, follows a ramping up of United Nations sanctions on the country in the wake of a series of nuclear and missile tests this year.

But Kim has repeatedly shown he will not be cowed by international criticism or pressure, as he has carried out further weapons tests while cementing the personality cult that surrounds him at home.

In late June, Kim was named chairman of a new supreme governing commission, underlining the 33-year-old's absolute control over every aspect of state policy in the isolated, nuclear-armed nation -- including the country's network of detention centres and labour camps, according to Washington.

After his father's death, the young Kim was expected to initially rely on a coterie of powerful aides, including his uncle Jang Song-Thaek.

But that expected tutelage was short-lived as Kim started to remove any potential challenges to his authority by executing Jang.

Other purges of high-ranking officials followed.

Kim Jong-Un was born to his father's third wife, Japan-born ethnic-Korean dancer Ko Yong-Hi, who is believed to have died of breast cancer in 2004.

He was sent to school in Switzerland, where he was looked after by his maternal aunt Ko Yong-Suk and her husband.

School staff and friends, who were reportedly unaware that he was a member of North Korea's ruling family, remembered him as a shy boy who liked skiing and Hollywood tough guy Jean-Claude Van Damme.

Meanwhile in a recent interview with the Washington Post, Ko -- who defected to the US in 1998 -- described Kim as short-tempered and lacking in tolerance.

He was also basketball mad, according to Ko, and even slept with a basketball.

Kim knew from his eighth birthday that he would become North Korea's leader, but he only entered the public eye in 2008 when his father suffered a stroke and Pyongyang revved up plans for the nation's second dynastic succession.

But he has distanced himself from his father's legacy and shown himself willing to alienate the North's sole major ally, China, with his unstinting efforts to advance the country's nuclear and missile programmes.

Just two days before his 33rd birthday on January 8, 2016, Pyongyang said it had successfully tested a Hydrogen bomb, a claim widely refuted by international experts.

But with the H-bomb claim, Kim's nuclear achievements outstrip those of the country's founding leader Kim Il-Sung and Kim Jong-Il.

Kim Il-Sung is still widely revered in North Korea, something his grandson has sought to play on by appearing to mimic his hairstyle, dress, mannerisms and public speaking style.

The younger Kim has also continued the time-tested ways of his forebears in selectively stoking tensions with rival South Korea, occasionally extending an olive branch only to snatch it away again.