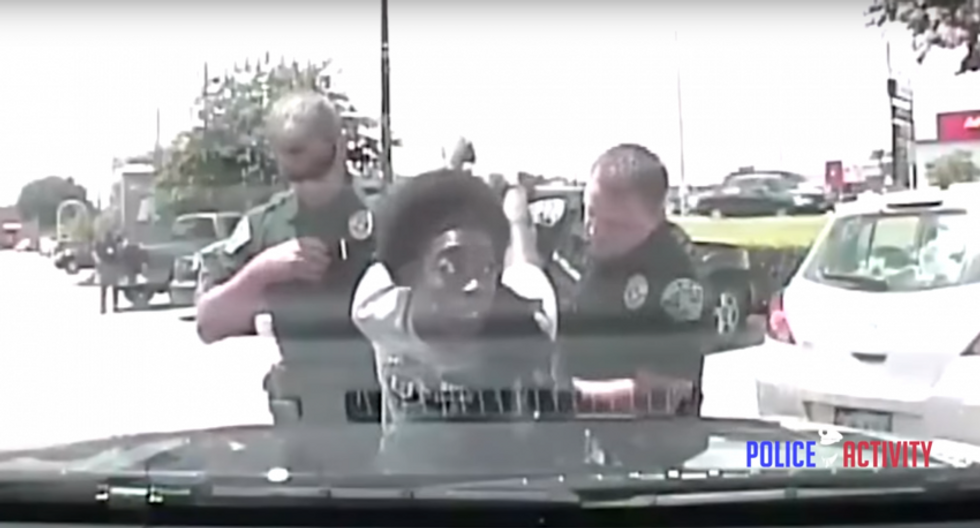 Newly released dash camera footage shows an Austin police officer body slamming a black teacher to the pavement -- and afterward, another officer on the scene told her that white people are right to fear blacks because of their "violent tendencies."

Per The Washington Post, 26-year-old teacher Breaion King last June was caught allegedly driving 15 miles per hour over the speed limit when officers tried pulling her over. King was seemingly unaware of the police, however, and pulled into a parking lot before coming to a complete stop.

As she was about to exit her car, one officer approached her and told her to sit back down in her vehicle. He asked her for her license and registration, and when she hesitated, a struggle began to ensue.

The officer asked her to get out of her car. As she began doing so, he grabbed her by the arm and yanked her forcefully out of the car, and then body slammed her onto the parking lot pavement.

"Put your hands behind your back!" the officer repeatedly yelled while he was on top of her.

The officer handcuffed her and, with the help of the other officer, put her in the patrol car.

As she was being driven to the police station, she engaged in a conversation with an officer named Patrick Spradlin, who was driving the police car. She asked him why white people are so afraid of black people, and the officer told her it was perfectly understandable.

“Let me ask you this,” Spradlin asks. “Why are so many people afraid of black people?”

“That’s what I want to figure out, because I’m not a bad black person,” King says.

Austin police are now investigating the officers involved in the video. Austin Police Chief Art Acevedo told reporters that he felt "sickened" when he saw the video of King's arrest and he vowed to address the issues of racism and bias that it uncovered.

“For those that think life is perfect for people of color, I want you to listen to that conversation and tell me we don’t have social issues in this nation,” Acevedo said. “Issues of bias. Issues of racism. Issues of people being looked at different because of their color.”

Check out the whole video of the arrest and aftermath below.