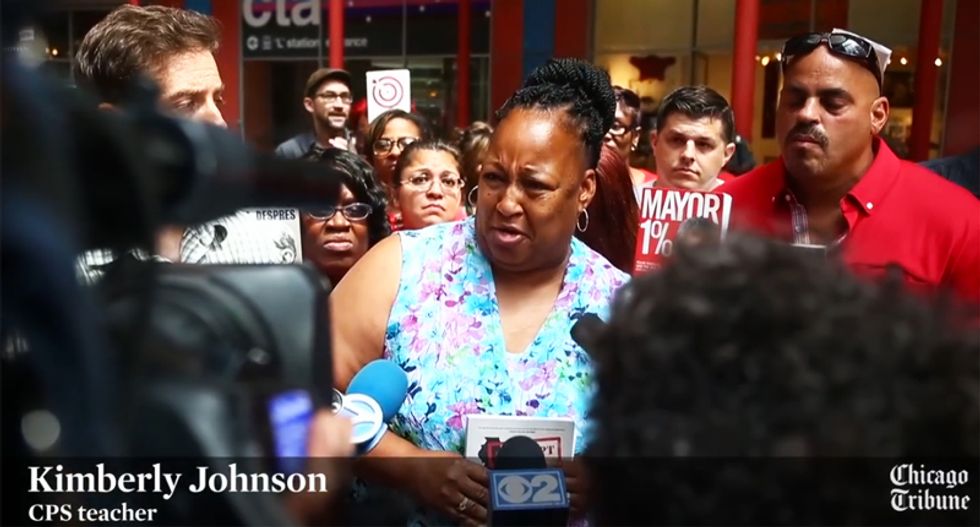 Chicago teachers offended by a 2011 email written by Gov. Bruce Rauner (R), calling half of them "virtually illiterate," crashed the governor's press conference on Friday to challenge him to a "read-off," reports the Chicago Tribune.

Rauner has been under fire since Thursday after the 5-year-old email was leaked, where the governor wrote, "50% of principals are managerially incompetent and half of teachers are virtually illiterate."

Late Thursday, a spokesperson apologized for the governor, and on Friday the governor extended his own apology stating: "The remark I made in that email five years ago was both inaccurate and intemperate. And I apologize. I am a strong advocate for teachers. Always have been, always will be."

Chicago teachers were not appeased, and on Friday they crashed a press conference scheduled by the governor to announce the signing of an education bill.

Calling his rhetoric "Trump-like," teachers took turns interrupting the governor by reading his comments aloud before reminding him of  how he has damaged the educational system in Illinois.

"Governor Rauner, we are teachers and we are not illiterate,” CTU Staff Coordinator Jackson Potter stated. “We are going to read you a few examples of the ways in which you burned education, destroyed this great state."

"We challenge you to a readout — books and literature on educational justice and civil rights," another unidentified man said. "Will you accept that challenge? It's important that we educate you about what we really do every day, 'cause obviously you don't really know."

As each speaker finished they either exited on their own or were hustled out by security.

Outside the press conference, teacher Kimberly Johnson ripped into the governor.

"We read. We plan. We do lesson plans," she explained. "And for our governor to criticize us like that? No!"