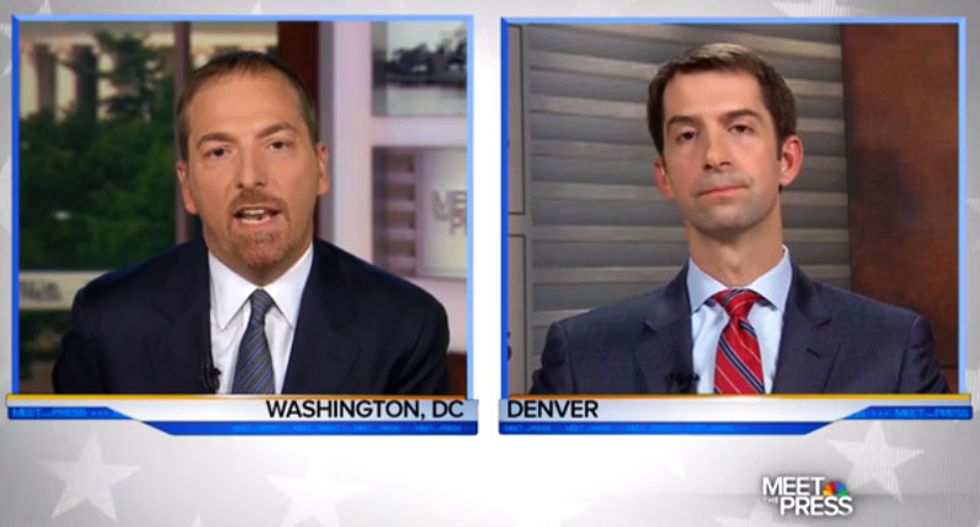 Todd pressed the Arkansas senator by pointing out that his own views about how to handle the Middle East were much more similar to Hillary Clinton's than they were to the much more vague views of the presumptive GOP presidential nominee.

"In many ways, what you outline as a foreign policy is the exact opposite of Donald Trump and seems really closer to Hillary Clinton," Todd asked. "Or Hillary Clinton seems closer to you. How do you explain this?"

"Well, I can assure you that I'm not very close to Hillary Clinton. I think she's disqualified herself from commander-in-chief by her cavalier attitude towards our nation's secrecy laws. And she has been responsible for many of the worst decisions of the Obama administration," Cotton replied. "She was literally present when we pressed the reset button with Russia just a few months after Russia had invaded Georgia. In 2011, when our commanders said they needed more troops in Iraq and when every Iraqi leader wanted a new agreement to keep those troops there, she couldn't achieve that even though she was secretary of state."

Uncharacteristically undeterred, Todd pressed the senator about Trump, asking, "Okay, fine, but you just gave the case against Clinton. What's the case for Trump? You just did a whole speech, by the way, earlier this weekend. You didn't even mention his name. You laid out a strong case against her. But you did not make a case for him. Make the case for him."

"Well, Chuck, the case against Hillary Clinton's judgment in foreign policy is very strong to say nothing of her support for Obamacare or immigration or the fact that she would--" Cotton beagan before being cut off.

"Donald Trump can ultimately make the case for himself. But Donald Trump, like most Americans, like most Republicans, believe in protecting America's core national interests," Cotton parried.

Noting his avoidance, Todd pointed out, "You don't come across as an enthusiastic Trump supporter. Is that fair?"

"Maybe I don't just demonstrate enthusiasm much in life, Chuck, especially in such dangerous times as these," Cotton flatly replied.