WATCH: Colorado neighbors work together to free black bear with plastic jug stuck on his head 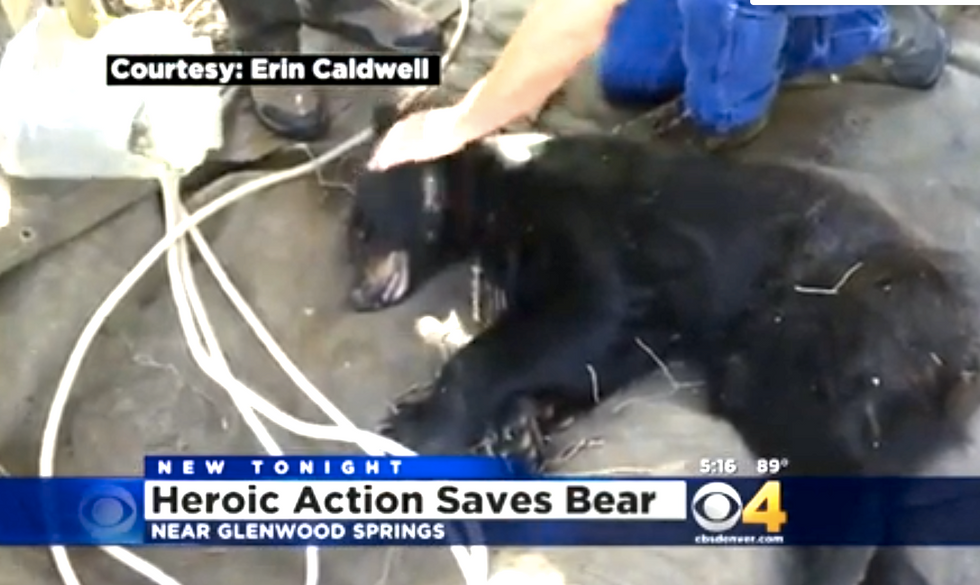 "Jughead Bear"  -- a 2-year old Black Bear who had been wandering around a Colorado neighborhood with a large plastic cheese ball jug stuck over his head -- was lassoed by a local bed-and-breakfast owner on Wednesday.

Jim Hawkins called wildlife officials, who were able to tranquilize the bear and free him from the life-threatening trap. Area Wildlife Manager Perry Will told the Glenwood Springs Post Independent that he had received many phone calls from residents over the past several days. Despite the calls expressing concern for the bear, by the time officials would arrive on scene, the bear would be gone.

Hawkins' wife had alerted him to the bear days before. "He was just a little bear with a big problem,” Hawkins said. “He was a 2-year-old with a space helmet on.”

The big plastic jug prevented the bear from being able to reach water or food, and the bear would have died without intervention. So, Hawkins put aside rope and heavy gloves, and kept a lookout for the bear. The Post Independent picks up the story:

He threw a loop around the bear but it slipped down to the bruin’s midsection. After that, Hawkins said, “it was like a rodeo.” Both Hawkins and bear were pulling. Eventually “the bear figured out his problem was at the end of that rope,” Hawkins said.

The bear came after him and they had “a couple of good rolls in the grass.”

Although the bear couldn’t use its mouth, it had sharp claws. The bear gave up the fight with the larger man and scooted up a tree. Hawkins tied him off so that even if he came down, he couldn’t get away.

Carbondale District Wildlife Officer John Groves hightailed it to the bed and breakfast after getting the call and tranquilized the bear. They used a tin shears to cut the heavy plastic off the animal’s head. Groves applied a reversal drug and the bear snapped out of its slumber in a few minutes. He took a drink then ambled off, Groves said. He estimated its chances for survival were high.

Watch videos about this story, embedded below: